Clint Barton is the alter ego of Hawkeye from the Marvel Comics series The Avengers. He also appears as a main character in the Marvel Cinematic Universe and sometimes appears in other Avengers cartoon related shows.

Hawkeye first appeared in Marvel Comics as early as 1964; he has also been featured in television, film, video games and toys.

Clint spent his early childhood in an abusive household in Waverly, Iowa. After his parents died in a car crash, he and his brother spend years in an orphanage before they ran away to join a circus called the Carson Carnival of Travelling Wonders. Clint doesn't have a high school diploma or much traditional education at all.

He eventually becomes proficient enough with a bow in the circus to get his own solo act as "The Amazing Hawkeye." After a stint of villainy on the side of Natasha Romanova,[1] he becomes a superhero. He has played an important role in the Avengers, West Coast Avengers, and the Thunderbolts teams.

Clint Barton has hearing loss in several of the comics.[2]

Has briefly gone by the aliases of Ronin, Goliath, and the Golden Archer.

In the Ultimate Universe, Clint was able to have a more stable family life with his wife, Laura Barton, and his three kids. A traitor within the Ultimates led a black ops team to Hawkeye's home, slaughtering the entire Barton family. Clint was the sole survivor.

In the Marvel Cinematic Universe portrayed by Jeremy Renner, he first appeared in an uncredited cameo in Thor 1 and later starred in The Avengers film. He appears in The Avengers: Age of Ultron where he is shown as married with children. His MCU version is based on the Ultimates verse in the comics.

Clint appears in the animated movies: Iron Man: Rise of Technovore, as a special agent of S.H.I.E.L.D. and partner of Black Widow, and Next Avengers, as the father of Francis Barton.

there is little to nothing on the comic fandom history for Clint, especially the pre-Fraction and pre-MCU decades 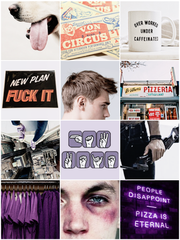 Clint's characterization in fanfic is typically a mix of his various incarnations in different but related canons.[3] With the emergence of the Clint/Coulson pairing in 2011 after the premier of the first Thor movie, fans were looking for more canon material to characterize Clint better, as there was not much to build on in the MCU at that point. Lots of people turned to the comics, specifically to Matt Fraction's Hawkeye comic that was being published at the time (see Hawkguy below). Clint's backstory from the 616 verse is often imported into MCU-based fic despite it contradicting established MCU canon, while his personality is often informed by comics-based fanon.

I was in Clint fandom, and there was so much Fraction from way before [Fraction's Hawkeye book] finished. Even if people weren't actually reading it (and I have no idea if people were), it was definitely a big part of the Clint comics posts passed around to build backstory on. I noped out on the book before it finished, largely because the fandom, which was MCU heavy, was so obnoxious about it. (Also seen a lot: the child abuse flashback parts of Blindspot.)

As subsequent movies failed to develop Clint, more and more fans became disappointed in his MCU portrayal. Some fans went as far as to bash his actor for MCU Clint not being more like the comics or the Avengers Assemble version of the character.

Clint's hearing loss got a lot of attention in fandom. A lot of people felt like the MCU erased his deafness, making it a case of ableism in canon, while others pointed out that the comics re-canonizing his deafness were published after the first Avengers movie came out so the MCU couldn't have built on that story.

Here is a rundown of the history of Hawkeye's deafness and why it would be nearly impossible to have represented it in the MCU:

-In Hawkeye (1985) #4 he deafens himself by putting a sonic arrow between his teeth in order to get out of a jam.

-He remains deaf until 1993 at which point he dies and when he is brought back his deafness is healed.

-In Fraction and Aja's Hawkeye #15 he is shot in the ears with his own arrows by a clown-themed serial killer named Kazi. This also paralyzed his brother Barney from the waist down.

-Hawkeye #17 is the sign language issue. We learn that Clint was temporarily deafened as a child due to child abuse and that he and Barney used to sign with each other when they were young. Untranslated sign language is used throughout the issue (along with clear character body language) to illustrate what is going on.

So you see the problem in this. Joss Whedon could not possibly have known during production of either Avengers or Age of Ultron that Clint was deafened. His deafness is not congenital but is caused from outside sources - MCU Clint would only be deaf matching the canon if someone injured him. There was no erasure whatsoever - Ultimates Clint is not deaf and historically Clint had not been deaf in 616 for twenty years.

I am not deaf but the way a number of people talk about Clint's deafness on tumblr makes me uncomfortable. I dislike the ways that it has become fanon for people who have not read the comics, used for headcanons to show how progressive the Avengers are or how he can use it to connect with Coulson. It feels fetish-y in a way that a lot of mental illness fics and headcanons written by people who aren't mentally ill or don't have the mental illness they are writing about (I have bipolar and whoo boy those inaccurate and offensive fics) feel fetish-y.

I also dislike that it's directly related to a trend in which Fraction and Aja's Hawkeye is viewed as the only Hawkeye there is where meanwhile spectacular titles influenced by it (All New Hawkeye, Secret Avengers vol. 3) do not get nearly as much attention. Hawkeye interpretations prior to Fraction and Aja get shafted too.

Many fans feel that Hawkeye/Clint Barton deserves his own movie, especially since the lack of scenes with Hawkeye in The Avengers (2012) - he spent the majority of the film brainwashed or fighting. Others want him to appear in Agents of S.H.I.E.L.D. or his own television series (Example). 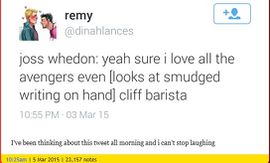 Since the lack of lines in the first one and the expected lack of them in the second film, many criticize Joss Whedon for not giving Hawkeye more screen time, even going as far and joking about how he doesn't know the character (see right image for an example).

Since many of Clint fans are also Clintasha and Natasha Romanoff fans, who also want a Black Widow Movie, many want to see a "Budapest" or "Strike Team Delta" type film, where the two are partners (Example, Example). Others would love a live-action version of the Hawkeye comics by Matt Fraction, along with starring roles for Kate Bishop and Lucky the Pizza Dog.

After the MCU fandom blew up when it was revealed that Clint owned a farm, movie possibilities also appeared.

In 2018, Clint was the only original Avenger who was pointedly absent from the marketing campaign of the eagerly anticipated Infinity War movie despite being listed as part of the cast on IMDB, which lead many fans scratching their heads and coming up with possible explanations. Some believed his role was too spoilery to include in trailers, others thought Marvel completely forgot about him. The #WheresHawkeye hashtag appeared on social media, getting more and more use with every new teaser trailer and poster. It also lead to various wacky fanworks. Another hashtag, #JusticeForHawkeye, was used for the same purpose.

In the MCU fandom, the most popular pairing for Clint is Clint/Coulson, but Clint/Natasha is nearly as popular. Other common pairings for Clint are Bucky/Clint, Bruce/Clint, Clint/Tony, and Clint/Darcy. Hawkeye has been paired with all of the Avengers - in OT6 fics. Clint/Loki is a moderately common dark or enemies to lovers ship. The comic canon pairing of Bobbi Morse/Clint is still fairly rare in the MCU fandom, but it does show up - usually as a past relationship. Clint/Thor, Clint/Scott Lang, and Clint/Maria Hill are rarepairs.

Avengers: Age of Ultron making Clint/Laura canon was much complained-about for sinking both Clint/Coulson and Clint/Natasha, but the pairing did gain some fans while many people abandoned the then-juggernaut C/C and C/N ships over time. Clint/Pietro is uncommon but has a loyal following, particularly among Japanese and Korean fans. Clint/Wanda is still fairly rare in the MCU.