History of the Use of the Term

One of the first print uses of the terms was in the April 1971 issue of National Lampoon. An article entitled "Spoilers," by Doug Kenney, lists spoilers for famous films and movies.

Another early use was mentioned in 1980 when a fan chides another for giving away the ending to a story and writes: "At the very least, I suggest those who plan to review fanworks, take the time to read the columns in pro sf zines. Inevitably, you will cross the path of Spider Robinson (reviewing for Analog right now) and his invarying use of the simple 'WARNING: I AM ABOUT TO COMMIT A SPOILER. IF YOU DO NOT WANT TO KNOW THE END OF THIS STORY, SKIP THE REST OF THIS PARAGRAPH.'" [1]

The online use of the term is the subject of some debate, however in a 2018 Slate article it was noted that the term may have been used in the early 1980s on the SF-LOVERS email distribution list which had its origins on ARPANET: "This new use of the computer network, however, created all sorts of new problems too. One was the fear that a user might share information that someone else didn’t want to see. This led to the very first online “[SPOILER ALERT],” which the author put above his message to warn readers before describing (spoiler) the death of a certain heroic Vulcan at the end of The Wrath of Khan."[2] 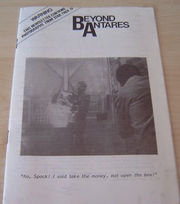 label on a 1986 zine: "WARNING: THIS NEWSLETTER CONTAINS PHOTOGRAPHS FROM STAR TREK IV"

It is common to give a spoiler warning in the header of a fan fiction story if it contains numerous references to a specific episode or book. This is far more common in the immediate aftermath of the episode, when many fans either may not have had a chance to view the new canon, or may be specifically seeking out fan fiction that deals with evetns in the new canon. 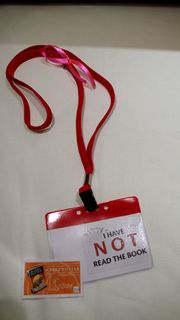 One common tactic for encoding spoilers, often used on Usenet newsgroups, was rot13. But by the time fandom had taken up residence on mailing lists, it was more common to use the word "Spoiler" in the subject line and to provide "spoiler space" -- multiple lines of space before the spoilers appeared. On blogs and Livejournal-type services, spoilers are more often put "below the cut", requiring a reader to deliberately click a link to see the spoiler.

Some fans also use HTML to hide spoilers; for instance, putting spoilers in white text on a white background. This requires the reader to higlight the text in order to be able to view the spoilers; however, it is not always implemented correctly, sometimes resulting in unintentional spoiling. [3] In addition, this formatting may not be accessible to, or may not work to obscure the spoiler for, all readers, such as those who browse the internet using screen-readers.

Quick mod message - please don't put spoilers above a cut, in this comm! For some people "Not a death fic" is a spoiler! And "Spoiler warnings!" is also a spoiler cos it tells people there are warnings, and therefore something to warn for! There's a long history in Pros of being considerate to people about spoilers and we'd like to carry on with that... If you just put something like the title, or "More information" or something as the lj-cut text, then anyone who's worried can click there to find the spoiler info, and anyone who wants to enjoy the story first can do so. [4]

Some examples of spoilers are "the Titanic sinks", "Darth Vader is Luke's father", the identity of "the final Cylon" on BSG, and "Snape kills Dumbledore" (the spoiling of which, at the time of the book's release, stirred up much conflict).