Farscape was a space opera show in which anything could and did happen during its four seasons and post-cancellation wrap-up miniseries. Although based on a seemingly familiar premise -- boy gets lost, tries to get home -- Farscape took that premise and ran with it all over various genres, tropes, and levels of crackiness.

One trope Farscape is notable for (mostly) avoiding is the reset button, especially the 42-Minute Reset. Events from previous episodes are referenced again later in the season or several seasons on, dead characters rarely come back to life (and if so, only with effort, soul-searching, and a price to be paid), and all of the main characters -- even the animatronic ones -- grow and change, permanently, over the course of the show.

Although some have noted that in the latter seasons John Crichton suffered from noticeable manpain, overall the show passes the Bechdel Test well.

"This show may be just about the hardest show in fandom to pimp. On first watch it's a little too loud, a little too garish, and a little too weird. You dismiss it as "Muppets in Space," and pass on by. So did I. But I was missing out on something huge and gorgeous and epic and true. And so are you. Which brings us to ... Ten reasons to watch one of the greatest scifi shows ever made"[1]

A "puppy pile" may be called down on people new to the series. A puppy pile involves squee and encouragement from older fans, with non-spoilery teases about what's to come.

Although fans of the series are deeply enthusiastic about recruiting new fans, the first several episodes are sometimes a stumbling block:

I was enticed into Farscape-watching with the promise of big plot arcs, excellent continuity, and complex storytelling; as of the first few eps, the show isn't yet delivering in those areas. I don't expect epic storytelling yet — epics, pretty much by definition, require a lot of time in the telling — but the contrast to Firefly, which did introduce elements right away that could clearly lead to big arcs, is instructive. Farscape's characters are certainly interesting, but they don't yet have much depth or even much history (even the fact that they're recent prisoners, which is theoretically very interesting, doesn't yet have much urgency to it, particularly in the cases of Zhaan and Rygel). This is also true of S1 BtVS, of course; but early BtVS eps are much more tightly structured: multi-layered stories linked by a central metaphor. [2]

The Save Farscape movement was a major grass-roots campaign by concerned fans to influence the broadcasting decisions of a television network. It was not the first of such campaigns, by any means. Fan campaigns to save beloved shows date back to 1967-1968, when an unprecedented effort of protest letter-writing and phone calls by an organized group of fans influenced NBC to renew Star Trek for a third season. In 1984, the group Viewers for Quality Television was founded, initially to "rescue" the series Cagney and Lacey from cancellation; its advocacy was successful and CBS retained the show, which gained subsequent popular and critical acclaim.

The 1990s saw the introduction of the Internet as a weapon that fans could utilize to mass popular support for pressing networks and production companies to retain beloved shows. Fans created message boards and websites to spread the word and direct protests to the appropriate authorities. Some of these efforts over the years have been temporarily successful (i.e. Once And Again, Jericho), while others have not (i.e. Mystery Science Theater 3000, Roswell). Some efforts, from galvanized fannish communities, have helped influence networks to revive shows that have been cancelled for years (i.e. Family Guy, Futurama).

The Save Farscape campaign represents a significant, large-scale effort in this regard. Following the September 2002 announcement by the Sci Fi Channel that it was rescinding its renewal of Farscape for a fifth season, angered fans leapt into activity with a multi-tiered effort. Besides the now common tools of phone calls, letters and e-mail messages, fans broadened their responses to call more attention to their cause. Many of them sent Sci Fi Channel executives packages of crackers, in homage to the title of a favorite Farscape episode, "Crackers Don't Matter." They actively worked to recruit new audiences to the series, including an attempt to find enough "Nielsen families" to visibly boost the show's ratings. In a more media-savvy age, the Beyond Hope Fund (later retooled as Where's My Riot?) was created to supply press kits for the media, purchase ad space in newspapers, and fund other publicity efforts (these include the auction of which the materials in this collection were a part). Some fans even attempted to locate funding that would free Farscape from the financial restraints of network television and make it a purely viewer-funded series. All of these actions represent a new type of multi-faceted media campaign that both built on lessons learned from similar fan protests in the past and evolved new forms of attack.

In the end, the campaign was partially successful. Although the Sci Fi Channel did not renew the series itself for a new season, it did agree to air a four-hour miniseries that would wrap up unfinished storylines from the series. Farscape: The Peacekeeper Wars was broadcast in October 2004. [3] 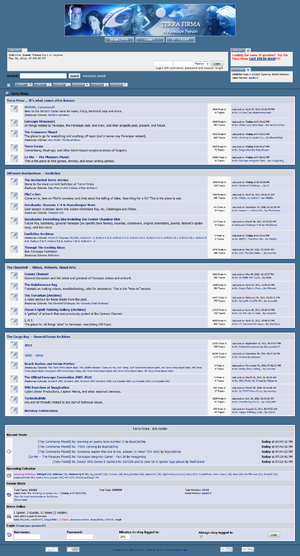 screenshot of the Terra Forma forum 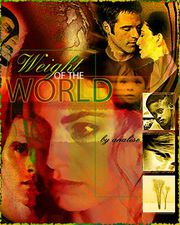 Weight of the World fanfic cover