Bucky Barnes, also known as the Winter Soldier or Captain America, is a Marvel Comics character. He also appears in the Marvel Cinematic Universe and appears in other Avengers/Captain America cartoon related shows.

In the original Captain America comics, Bucky Barnes is a teenager who is unofficially adopted by the U.S. Army Camp Lehigh in Virginia as their mascot after the death of his father, a soldier who died during training. The young Bucky serves alongside Steve Rogers as Captain America and as one of the Kid Commandos throughout World War II. He is ostensibly killed in an explosion when he fails to defuse a bomb during an encounter with Baron Zemo.[1]

In The Winter Soldier arc by Ed Brubaker, it is revealed that Bucky survived the blast—but lost one of his arms as well as his memories of before the blast. He is found by a crew of Russian patrol submarine and is brought to Moscow. He is then programmed to become a Soviet assassin for Department X under the code name 'The Winter Soldier'.[2]

Following the superhuman Civil War and the death of Steve Rogers, Bucky takes on the mantle of Captain America for a time.

In the Marvel Cinematic Universe, Bucky Barnes (portrayed by Sebastian Stan) first appears in the movie Captain America: The First Avenger as Steve Rogers' best friend and ally. He is ostensibly killed near the end of the film.

He returns in Captain America: The Winter Soldier, where it is revealed that Hydra had captured him after his fall and experimented on him, brainwashing him to be a killer assassin. He is put into a state of cryofreeze every time his handlers are done with him. In CA2, he is sent after Nick Fury, and subsequently after Steve Rogers; in their second encounter, Steve realizes who the Winter Soldier really is. Steve tries to break through the Winter Soldier's brainwashing, telling him that his name is Bucky and he is Steve's friend, and ultimately, by refusing to fight him. His efforts finally seem to have some effect; the Winter Soldier saves Steve from drowning in the water after the helicarrier falls into the river. He is last seen looking at the Bucky memorial of the Captain America display at the Smithsonian Institution in Washington, DC.

Although Bucky was already a popular character in the MCU fandom, in the wake of Captain America: The Winter Soldier he experienced an explosion of popularity the likes of which is still reverberating throughout Tumblr today.

This expansion of interest in Bucky's character was largely the result of his tragic Winter Soldier storyline being shown on the big screen for all to see, but was further spurred on by the general likeability and adorable dorkiness of actor Sebastian Stan. The character also has sex appeal - the Murder Strut is the particularly sexy, purposeful way that the Winter Soldier walks.

In the words of tumblr user agentcap:

In the wake of The Winter Soldier, a considerable amount of controversy was stirred up when several interviewers and fans unthinkingly referred to Bucky Barnes as the "villain" of Captain America: The Winter Soldier. This terminology has resulted in much of backlash from the fandom at large as well as noticeable discomfort from actor Sebastian Stan.

Much of the argument against calling Bucky a "villain" stems from the question of agency. Whereas other villainous characters (such as Loki and Grant Ward consciously chose to make harmful/evil decisions despite being repeatedly offered alternatives, Bucky was never given this choice. The only way that Hydra was able to make him commit such horrendous acts of violence and destruction was by torturing and brainwashing him to the point where he had no memories of his past life and no capacity to make his own choices. In Captain America: The Winter Soldier, the first time the Winter Soldier shows any hint of questioning orders or doubting himself ("but I knew him"), he is violently mind-wiped until he has no memory of his perceived disobedience.[3]

Bucky Barnes never made the choice to be evil, and the first conscious decision he makes as the Winter Soldier is to save Steve Rogers's life.

Sebastian Stan's protectiveness of Bucky Barnes—as well as his refusal to refer to Bucky as a villain despite prompting in many interviews—has earned him considerable praise within much of the Captain America fandom community. In response to being asked about portraying such a "villainous character", Sebastian responded that he "never approached it in the sense that 'he's a villain' or 'he should be a villainous character', but that he was a threat".[4] He has also referred to Bucky as "a good guy doing bad things" as well as emphasizing his role as "a victim of violence; someone who is unfortunately just involved in all these inner struggles and is essentially a PTSD victim".[5] 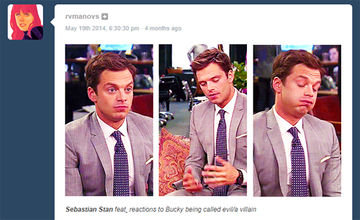 As shown in this tumblr post titled "Sebastian Stan, feat. reactions to Bucky being called evil/a villain" by rvmanovs.

This perceived protectiveness of Bucky's character has resulted in a running fandom joke about Sebastian Stan's inner turmoil whenever anyone refers to Bucky Barnes as a villain - see image to the left.

The battle cry of "Bucky Barnes is a victim, not a villain" is heard so frequently and with such vehemence that it has become an integral part of the fandom surrounding Bucky as a character. In particular, this argument over terminology has flared up several times with regards to Bucky being compared to other blatantly villainous characters such as Loki and Grant Ward.

With regards to the comparison to Loki: on a gifset featuring the captain "a villain is just a victim whose story hasn't been told", tumblr user zarabithia objected to Loki and Bucky both being represented by succinctly stating that "[Loki is a] whiny spoiled brat who keeps trying to commit genocide" whereas Bucky "wasn’t a villain [...] he actually was a victim".[6] Loki consciously decides to continue being murderous even after Thor offers him many second chances; Bucky is given no similar luxury of choice during his ordeal.

In July 2014, Jeph Loeb—one of the executives on Agents of SHIELD—drew a comparison between Grant Ward and Buck by stating that "[The Winter Soldier] has done things that are far more heinous than anything Grant Ward has ever done as far as we know, and yet, at the end of the movie, you’re rooting for him to come back on the side of the angels".[7] The general fan response to this sentiment was disgust and intense frustration.

Tumblr user the lady monsters succinctly dismantled this argument by commenting that:

bucky was literally a prisoner of war who was experimented on and tortured until he was unable to fight back against any orders and the minute someone showed up who started treating him like a person again, he started to revert back to his humanity and fight against his programming. ward is a grown-ass man who was treated as a person by the people on his team clearly presented with opportunities by them to make the right choices and refused to make the right choices every time. fuck grant ward[8]

Other assorted commentary for "Bucky Barnes is Not a Villain 2K14" includes:

With the release of Captain America: The First Avenger, the slash pairing of Bucky/Steve became popular, but it wasn't until the second film was released that its popularity skyrocketed to be one of the top MCU pairings.

Fannish interest in the slash pairings of Bucky Barnes/Sam Wilson and Bucky Barnes/Helmut Zemo increased after the miniseries The Falcon and the Winter Soldier was first released in spring 2021.

Possibly the most common crossover pairing (prompted by Jenna Coleman's brief appearance as Bucky's girlfriend Connie in the first film, and her TV role as Clara Oswald, a character who canonically has avatars throughout space and time) is Bucky/Clara.