alby_mangroves is a fan artist (mostly known as artgroves) and writer who has created hundreds of works, primarily in the Merlin and MCU fandoms since at least 2009. Primarily an artist, alby_mangroves has created many works, either standalones or collaborations with writers.

Art for the 4 Minute Window Series 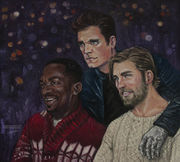 4 Minute Window is a series created by Speranza. The series spans 16 works and includes annual additions in the form of a Thanksgiving work followed by an Advent Calendar, many of which feature numerous artworks in pastel and pencil by alby_mangroves, including portraits of Steve Rogers and Bucky Barnes, and occasionally of supporting characters such as Natasha Romanoff or Sam Wilson. 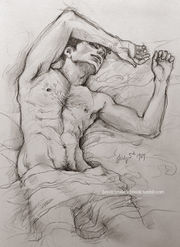 Brooklyn Sketchbook is a 2015 - 2017 collection of sketches created by alby_mangroves. The work features sketches of various MCU characters and is presented as though the sketches are drawn by Steve Rogers, who takes requests to draw portraits of his friends and fellow Avengers. Among the characters drawn to date are Bucky Barnes, Natasha Romanoff, Tony Stark, Sam Wilson, Wanda Maximoff and Peggy Carter. From the summary: "Pages from Steve Rogers' sketchbook."

The Long Road to Lynbrook 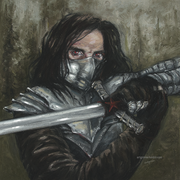 The Long Road to Lynbrook was a May 2017 collaboration with monicawoe for which alby_mangroves also served as beta. Part of the Captain America Reverse Big Bang, Alby's original artworks included numerous hand drawn pieces including chapter dividers. From the summary: "Six years ago, Bucky left the hamlet of Lynbrook to battle against the Knights of Hydra. Steve has missed him ever since, and refuses to believe he's dead. One night, Steve finds a frog at the well— a frog with one metal arm."

Our Memories Are Numbered 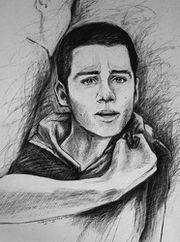 A collaboration with author Rufflefeather, Our Memories Are Numbered was posted on December 21, 2012 as part of the Teen Wolf Big Bang. There were various hand drawn works including a story banner and chapter separator. From the summary: "Stiles’ Jeep grinds to a halt, he sees someone running through the rain, he's not expecting it to be Derek. He's not expecting a Derek without any memories either, or an Alpha pack that's coming for all of them. He probably should've, because lately nothing goes the way he expects." 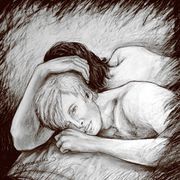 Flying Change is a collaboration with Magnolia822 for the Paperlegends challenge in 2013. The black and white drawn artwork included a story banner, divider of Arthur riding a horse, and images of Merlin and Mordred. From the summary, "After a few false starts, Arthur and Merlin find common ground in their exasperation, affection, and concern for Mordred, and their mutual attraction quickly blossoms . . . but an unforeseen event threatens their fragile happiness before the summer ends."