Stiles Stilinski is a popular character on Teen Wolf, played by Dylan O'Brien. "Stiles" is not the character's legal name: after much speculation, it was finally revealed in Season 6 that his legal name is Mieczyslaw, but as a child Stiles could not pronounce his own name (The closest he got was "Mischief"). Before this revelation, many people in the fandom thought that Stiles' given name was Genim, although Jeff Davis had stated that Genim is not his real name [1] and has recently stated that Stiles' real name is Polish on tumblr when asked the question about it.[2] Genim is not a Polish name. In season 5, a student ID card identifies that Stiles' real name begins with an "M."[3]

The gen relationship of Stiles & the Sheriff is sometimes the sole focus of fanworks and often the focus of a subplot in ship-fic.

Other slash pairings include Scott/Stiles, aka "You've still got me", "brotp", "BFF", etc., and Peter/Stiles. A number of fanworks have been inspired by the scene of Peter asking Stiles if he wanted the bite. See the erudite Tumblr discussion on the subtext of this scene, Archived version.

Stiles is also shown (in fandom) to be involved in threesomes and moresomes with Derek and/or his pack.

Stiles was canonically single for several seasons, but then fans started shipping Malia/Stiles when that became canon. Lydia/Stiles is now also canon.

There's a lot of talk about Stiles being bisexual in canon. A lot of that stems from the fact that he is a part of the insanely popular Sterek ship. However, fans have also discussed whether certain dialogue and interactions on the show were meant to indicate that Stiles would eventually come out as bisexual. Before the Sterek ship gained media attention many fans chose to interpret the way the character is portrayed as bisexual[4][5]. But the meta regarding the subjects isn't always focused on the pairing[6], instead talking about bisexual representation in media.

A close-up of a manilla folder during a parent-teacher conference scene from season one (for example), Archived version is the source of fandom's belief that Stiles' legal name is Genim. The fact that the showrunner later denied it on Twitter (see the Tumblr screencap), Archived version doesn't seem to have fazed anyone.

Because Stiles is one of the few main characters who remain human and have no special skills and abilities, fandom enjoys making Stiles special, turning him in fics into a powerful supernatural being, including, but not limited to a werewolf or other werecreature.[7] Examples of this trope include Weak and Powerless by peacensafety.

Demon!Stiles is an especially popular trope in fic[8] and in Tumblr gifs. For example, see 9/10ths of the Law by tsukinofaerii and these gifsets or here, Archived version

Relationship with His Father

Stiles's relationship with his father has been thoroughly explored, and there are Tumblr gifsets and fanart on each theme:

Relationship with His Mother

Stiles's mother is deceased in canon, but is often used in fanworks. Most fanfics assume that she died of cancer, even before the creator Jeff Davis Word Of God-ed that [she died slowly NEED LINK TO TWEET, SOB]. In relation to the trope of making Stiles fully or part supernatural creature, some fanworks such as He Blinded Me With Library Science by mklutz make his mother also a non-human. Her death is often used to add angst in fanworks or to give Stiles something in common with other characters whose family members have died, such as Derek or Allison.

Another trope: Stiles's Jeep belonged to his mother and is named baby or Betty.

Stiles's buzz cut has been the focus of fans since the first season[9], but it grew into a whole new fascination when MTV made a poll in November 2012.[10]

A Tumblr user screencapped the Facebook version of the poll ("Short or long? Which Dylan do you prefer?"), and a hilarious discussion by short-hair proponents ensued in the reblogs, Archived version. (Helenish's comment: ALL THESE LADIES ARE MY REPRESENTATIVES IN TEEN WOLF CONGRESS. I VOTED FOR THEM BECAUSE OF THEIR HAIR PLATFORM.)

Draft: [xxxx] people answered the poll in a close race, and a lot of feelings were expressed about both sides of this new debate. [links to posts with Feels!]

Even if it's about Scott's preferences we talk about Stiles's hair: curly ship by thegeekindenial, Archived version 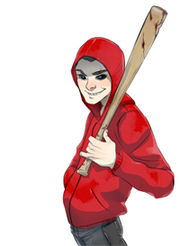 Stiles isn't the only character to have canonically worn a red hoodie or piece of clothing, but in fanworks he is often associated with the fairytale of Little Red Riding Hood. Sometimes the reference is used as a nickname in fanworks, such as in [Note: find fics - the one where Derek dies and he kills everyone, or that long h/c BAMF!Stiles one where the Alpha leader calls him "Red"]. Sometimes it's a straight-forward fairytale retelling.

People like to use his red clothing to match the red of alpha werewolf eyes.

Stiles and his relation to different fairy tales & myths has been explored in Once Upon a Time, read by Kalakyria and written by lady_ragnell.