The Boy and the Beast

The Boy and the Beast is a popular Teen Wolf fan fic by Dira Sudis. It is a Canon AU inspired by the fairy tale Beauty and the Beast with Derek/Stiles as the pairing. It uses several Teen Wolf tropes—Derek can transform fully into a wolf, and Stiles befriends Derek while he's stuck as a wolf—as well as more general ones, like hurt/comfort. Though it was written just before the start of season 3, it doesn't use any canon from season 2, so the cast is confined to those characters introduced in season 1.

In which events in Beacon Hills go rather differently from the start, and a Beauty and the Beast (ish) story ensues. (Scott is not a teacup and no one sings about their feelings.) 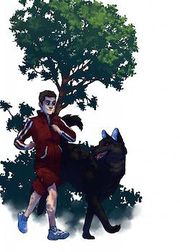 Lynnmonster, who is thanked in the author's notes on the story, commissioned a piece of fanart for it from artists kickingshoes.

The story was read and rec'ed widely, even on the book review site Goodreads, where it received 59 ratings (3.93 stars out of 5 average) and 14 reviews.[1]

A wonderfully endearing and compelling story that managed to capture my heart and deepen my love for Sterek. It was a very interesting twist and retelling of the original (and early) story-line of Teen Wolf, and a strong and well constructed one. The writing wasn't top notch, and its impact wasn't as great as I would've hoped, however The Boy and the Beast is a very good read, and one worth checking out-- even if you're not a fan of the ship.[2]

The relationships feel real, because they grow in time, and even though the story is not bogged down by endless telling and narrating, I felt like I could picture everything in my mind, down to the smallest detail.

And the emotion. Gosh, the emotion. Was it just me? Was I in just the right mood to be flooded by feels? Maybe. But that doesn't change the fact that they were there. I got this close to tears... twice.[3]

This was like the BEST alternate beginning story I’ve ever read. Dira Sudis is a master writer and this is a must read for those in the Teen Wolf fandom. This one has been bookmarked and will definitely be reread really soon.[4]

My favorite thing about this fic is the careful weaving in of just enough of the B&B story to make it familiar but transforming it in other essential ways so to stay inherently Teen Wolf (transformative works ftw). It’s as canonical as an AU can get, in my opinion. Read if you like AUs of TW S1, fairytale AUs, and/or charmingly protective Derek Hale.[5]

This is an AU, with lots of fluffy Stiles and Derek moments, expanding to include Scott, always including a worried, disappointed Sheriff (oh, the angst) and with an overarching plot to break the curse and bring the people behind the Hale fire to justice. I like the way Stiles and Derek communicated, and I was warmed by the thought of how much better Derek is when he has people he can trust at his back, right off the bat.[6]