Teen Wolf is an MTV television show based on the movie Teen Wolf from 1985. According to Wikipedia:

The series revolves around social outcast Scott McCall, a young lacrosse-playing student at Beacon Hills High School. His life drastically changes when he is bitten by a werewolf one night. Upon discovery that he is a werewolf, with the help of his best friend, Stiles, and the mysterious werewolf, Derek, he is forced to learn to balance his newfound identity among the many dangers that it presents with his teenage life. He must keep his loved ones safe and balance the relationships he shares with each person around him. Scott is also having trouble with keeping his secret from the girl he loves, Allison, and later finds out she is part of a family that hunts werewolves. The theme of "finding your place" is a prevalent undertone in the series that is mirrored by the pack mentality of werewolves.[1]

In September 2021 actors Linden Ashlby and Dylan O'Brien -- Sheriff Stilinski and Stiles -- confirmed fur Twitter their participation in the new film Teen Wolf in production and announced by Paramount+.

Characters that are mostly fanon are Laura Hale, Talia Hale, and Claudia Stilinski.

Another rather popular character is one who has never really been seen. Many theories surround the character Greenberg, who is only really referenced by Coach Finstock. Many believe he is Jared and had a single scene, where he throws up on the lacrosse bus in season two.

Teen Wolf fandom is very active on Tumblr. Many fans of the show like to reblog gifs that say "This show is a gift." Because of tumblr's inability to search terms using a "/", portmanteaus are very commonly used. See List of Teen Wolf Ship Names for many common ship names.

Many fans who had joined the fandom during seasons one or two were disappointed with the later seasons.[3] In particular, fans who were excited or at least optimistic about any aspect of the show's politics being progressive in early seasons became disillusioned.[4]

One of the more interesting aspects of Teen Wolf is that the universe created by Jeff Davis is notably free of homophobia[5]. This translated to a world where Danny, was the only openly gay character on the show, he was met with no backlash from the sports team he's on, the student body or anyone in the town. Aiden, Mason and Corey were the next main gay characters, all suffering no acts of homophobia and each having happy relationships.

Fans embraced this concept, and many Sterek shippers see it as one of the reasons why Teen Wolf could be the first show to successfully introduce a male/male relationship between previously-assumed-to-be-straight characters.[6]

By the start of season 4, however, many fans had become disillusioned and instead began to argue that TPTB were simply engaging in queerbaiting.[7]

For the full list of challenges on Fanlore, see Category:Teen Wolf Challenges

Many of the cast as well as the creator/executive producer Jeff Davis is on Twitter and answer questions from fans. Some, like Colton Haynes who plays Jackson on the show, like to have fun with fandom.

Last nights episode was gold for all you #sterek fans! What was your favorite part?

Tyler Posey and Tyler Hoechlin refer to themselves as "T Twice."[8]

Fans appreciate commentary from actors and Jeff Davis that acknowledges Sterek and/or slash interpretations[9], but there have also been arguments over whether some of these remarks constitute queer baiting.[10]

On August 24, 2012, Teen Wolf announced that it would host a fanfiction contest. Most submissions were Sterek, but the winner was a Stiles gen fic called "Side Effects," by lokiloo.

In July 2014, MTV announced it would create a subsite called The Collective specifically to house Teen Wolf fanworks.[11] Reactions were mixed, with most early ones focusing on MTV's Terms of Service.[12][13] 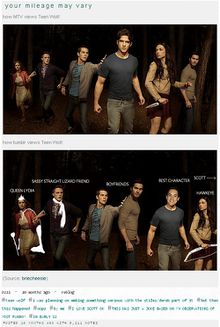 A majority of the fandom shifts the focus of their fanworks to Stiles or Derek, treating them as the main characters,[14] even in non-Derek/Stiles pairing fanworks. Additionally, the show's protagonist Scott McCall is often assumed to be or is portrayed as an idiot.[15] In this context, the revelation of Scott's secret plan to defeat Gerard at the end of season 2 was a surprise to many.

Although Teen Wolf has its own werewolf mythology, fans have either embellished or ignored parts of it in fanworks. A major difference between canon and fanon is werewolves' wolfed-out appearance. On the show, they have cosmetic and prosthetic enhancements, but are still humanoid; in a lot of fanfic and fanart, they can change completely into wolves and are sometimes mistakenly adopted as pets by a human character (usually Stiles). Frequently, in fanfic, the full shift is referred to as the "alpha shift" or is reserved for the alpha (usually Derek). In the show, only Talia Hale (and now Derek), in a flashback, has been shown to appear as a wolf, and they are the exception that proves the rule.

Fanfic often dwells on werewolf instincts and the differences between werewolf and human psychology beyond the full-moon killing instinct that is referenced on the show.

Fanfic rules for werewolf pack dynamics are often far removed from canon: requiring an Anchor, sensing if other pack members are in pain, sensing where they are, touching a pack member to take away their pain or help them heal faster, etc. On the show, "anchors" are mentioned a few times to mean anything that helps a werewolf keep in control, but in fanfic, the use of anchors can verge on the Sentinel and Guide trope. Meanwhile, taking away pain is a canon werewolf ability (introduced in the second season), but works on anyone, pack or no; pack fanon is generally far more developed than pack rules in canon. The proximity healing factor is complete fanon invention, though interestingly, something similar appeared on the show after the fanon--Derek successfully heals his sister Cora Hale, but drains all his alpha power in the process.

A lot of fanart depicts pack snuggles [3] or the pack as a family. No snuggling happens on the show.

Alphas and Betas and Omegas, Oh My

The terms "alpha", "beta", and "omega" are used on the show itself to describe certain categories of werewolf, with an emphasis on differences in powers/strength. Alphas can turn humans into werewolves, and their eyes glow red; betas are not as strong, and their eyes glow yellow. Omegas are werewolves without a pack. Until season three broke the rule by introducing an Alpha Pack, it was implied that the alpha was also by nature the leader of the pack and that there would be only one per pack. It is assumed in fanfic, but never? explained in canon, that Laura Hale somehow "inherited" the alpha powers after the rest of the pack died in the fire (including, presumably, the previous alpha). Canon shows Peter becoming alpha by killing Laura, but fanfic also addresses how the line of succession works in more peaceful circumstances.

The idea of mates as a variant of the soulmate trope predates Teen Wolf, but quickly became common in Teen Wolf fic.[17] It is often combined with other tropes like knotting, marking, and possessiveness.

Knotting was already popular when Teen Wolf appeared on the scene, but the trope fit with the werewolves so well that there is a substantial body of knotting fanfic in this fandom.[18]

The fandom has created a shared universe called NECKZ 'n THROATS which is a semi-Mundane AU (mundane in the sense that it does not engage with the canon concerns of monster-fighting) in which werewolves are known and the fanwork is focused to some extent on the characters interacting with or working for a genre of magazines that caters to the werewolf population.

Teen Wolf RPF represents a very small slice of the Teen Wolf fanwork pie; there are more than 100 times the number of FPF fanworks as RPF fanworks on the Archive of Our Own.[19] Teen Wolf RPF was a small enough fandom to be part of Yuletide 2012 (9 stories), 2013 (3 stories), and 2014 (4 stories).

For a full listing of TW fanfiction on Fanlore, see Category:Teen Wolf Fanfiction