Knotting is a kink based on the bulbus glandis, "an erectile tissue structure on the penis of canid mammals." [1]

Knotting fic can be found in fandoms containing canon characters with animalistic characteristics, or alien biology. The kink can be a part of a Werewolf AU or Shapeshifter/Skinwalker story, or it can be part of bestiality stories. There are also stories that use the kink with people who are otherwise mundane humans.

Knotting fic often involves elements of Mating, Soulbond, Mpreg or Heat Fic, as well as a whole host of other kinks and tropes.

Nonnies at fail_fandomanon discussed what some people may find appealing about knotting fic: 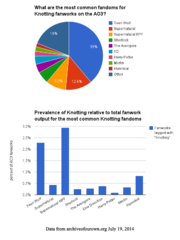 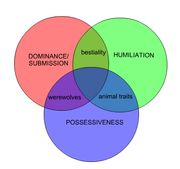 Venn diagram showing how the three main kinks intersect: "For all these tropes, knotting is certainly a kink here, and even when its not physically present it is often present metaphorically, represented in extreme power relations." Creator: missyjack. One commentator remarked: " It's a simple step to go from transmogrification to xmog-with-dominance to xmog-with-dominance-with-possessiveness to some sort of copulation, whether it signifies dominance, procreation, protection..."[4]

Knotting showed up in Trek fanfiction as early as the mid-nineties. Cruzing, a Star Trek: The Next Generation/Aliens fusion by Dekaddemon, has multiple knotting scenes.[5]

It is popular in Supernatural and especially Supernatural RPF fandom, to the point that there is a livejournal community, take_the_knot (created 15 March 2011), dedicated to the kink. The current popularity of the trope is attributable to its rise in Supernatural fandom (see below).

On the AO3 archive, the most popular fandoms for knotting as of March 2016 are (in order): Teen Wolf (1679), Supernatural (757), Supernatural RPF (372), One Direction (271), all of MCU combined (260), Sherlock (225), The Avengers (166), Hannibal (97), and Harry Potter (94).[6] These numbers may be partially attributed to the overall popularity, timing, and currency of fandoms. In 2013, popular knotting fandoms included Inception, XMFC, Sherlock, Teen Wolf, and the new Avengers film, which all came out after the rise of knotting in Supernatural. 2014 numbers include Hannibal, which started airing in April 2013, and One Direction, whose fans increasingly adopted AO3 in 2013 although fan activity occurred elsewhere in 2011-2012; activity in XMFC and Inception have slowed. As of 2016, Merlin fandom seems to have died down, while 1D continues full-throttle and the total number of Marvel films and TV shows has increased. Compatibility with the canon is also a factor in knotting's popularity for a given fandom; Harry Potter and Teen Wolf both have werewolves (and in fact HP knotting fic predates the AO3[7]). However, some very popular fandoms have few knotting works on AO3, even if they have canon werewolves (Twilight: 4 out of 4045).[8][9]

In Supernatural fandom, knotting's popularity arose from an anonymous prompt[10] posted on the Supernatural kink meme on May 17th, 2010:

I'd like to see Alpha male Jared, and Bitch male Jensen. Jensen is a snotty prude (think Lady from lady and the tramp) he may be a bitch male but he's not just going to let anybody take a go at his sweet little ass...until he meets Jared...then prudey little Jensen turns cock slut for Jared. Bonus points for J2 being OTP, Jensen was a virgin before Jared, and now that they met each other, it's for life.

Completely up to you if mating happens just anywhere like in the middle of the sidewalk, in a park etc or on a more private level.

tehdirtiestsock wrote three parts to that prompt called I ain't no lady, but you'd be the tramp (abandoned work in progress). Her author's notes read: "I debated posting this to the comm (as opposed to my journal) but then I figured it appeals more to this audience than anything else, haha. So obviously, warning for um. Unusual but all-parties-human sex. Also, in a world where some men are built to be fucked, I imagine God was also merciful enough to grant them a self-lubing hole. So, you know. It seems like the kind of thing that I should give a heads up about, hahaha. (warning! lubricating rectum ahead!)"

An RPS prompt was posted to Blindfold SPN and to a previous round on a Supernatural kink meme that has three fills. The prompt is very detailed and sets of the rules of the Alternate Reality universe:

Jensen was born an omega but he's never let any guy touch his ass and he never will. When he gets hired for Supernatural and he meets Jared, an alpha male, who he expects to be a jackass. But Jared's just Jared, loud, silly, and adorable. They become great friends and Jensen ends up living with Jared. Life is fine for them until Jared gets engaged to Genevieve and Jensen finds himself unexpectedly jealous and miserable. A slightly drunk Jensen convinces himself he just needs an alpha male around and brings a stranger home. Jared's supposed to be out for the night but he come home and catches them. Jensen figures Jared will just laugh it off but Jared doesn't at all, in fact he get really angry. He kicks the guy out and roughly show's Jensen who he belongs to. Jared's been in love with Jensen for years but always respected Jensen's choice, but if he's suddenly a slut for knot it's going to be Jareds and only his.

The three fills are Heat by the_miss_lv, No Substitution by pianoforeplay, and Not by tryfanstone. The three stories, particularly No Substitution, expand on the rules set out in the prompt and have spawned an unofficial Alpha/Beta/Omega shared universe that has become popular both on and off the kink memes.

Nearly all of the stories in this 'verse are m/m slash, and they allow for examination of inherent sexuality that is strongly heteronormative and based on popular beliefs about actual canine or lupine sexual and mating behaviour that uses otherwise human characters, but rarely women, in the story.

poor_choices has written several stories, both het[12] and femmeslash[13] that ask the question, "What about the girls?"[13].