One Direction is an English/Irish boy band that was formed to compete in the British reality show The X Factor in 2010, and went on to release several very successful albums and singles.

As of November 2015, the group has completed four world concert tours. They also went on tour with other X Factor contestants in 2011.

The original members are Niall Horan, Zayn Malik, Liam Payne, Harry Styles, and Louis Tomlinson. Zayn officially left the band on March 25th 2015, with the rest continuing as a four-piece.[1]

On 23 August 2015, it was reported that 1D would go on a year-long hiatus starting March 2016. Many people assumed it would be permanent.

Official filmed footage includes, but is not limited to, The X Factor season 7, a concert DVD from the first solo tour (Up All Night: The Live Tour), a documentary/concert film shot during the second tour (One Direction: This Is Us), a concert film from the third tour (One Direction: Where We Are - The Concert Film), as well as 15 music videos (as of November 2015) and three perfume. commercials.

See Timeline of One Direction Fandom

Popular Tumblr gif depicting the band members during their X Factor auditions in 2010. A well-made 1D gif post can easily amass tens of thousands of notes on Tumblr; this one has almost 300,000. The high note count may be partially due to the original poster's use of the post as a fandom roll-call ("every directioner should reblog this ♥"), but the subject matter (fetus!Direction) was bound to please. Other crowd-pleasers include shirtless beach scenes, Harry in his underwear, Harry getting hit in the crotch with a shoe, and everyone falling down.

In addition to interest in the group's music, the major fandom appeal factors of One Direction include the members' physical attractiveness, their goofy charm in interviews and performance videos, their presence on social media, the fact that they are very physically affectionate with one another, and the overall impression that they are genuinely good friends and enjoy what they are doing. Many fans will admit to a fave, but some fans are interested in the band because of one of its members while other fans are interested in the members because of the band.

The fandom seems to have appeared on Twitter and Tumblr almost immediately following their first performance as a group and quickly gained momentum.[2] Until 2013ish, there was also significant fan activity on LiveJournal, but due to LJ fandom's migration to Tumblr, 1D LJ comms have been less active since then. The earliest LJ comm was created while One Direction was still on The X Factor.

Many fans call themselves "Directioners" [3]. These fans refer to newer fans of One Direction, generally fans from after One Direction released music in the United States, "directionators" as a differentiating feature.

Fans have created much fanart and Tumblr gifs, vids, crafts, posters to bring to concerts, along with a great many fanfics, including slash, het (with girlfriends), gen, and self-insertion (often Mary Sue) fics. Awareness of 1D fanfic is so great that a free iPhone app "One Direction Fan fiction" was released in September 2012.[4] Some non-RPF parts of the fanbase disapprove of 1D fanfic.

Wattpad is by far the most popular platform for One Direction fanfic (see onedirection and 1direction tags).[5][6] A lot of fanfic also gets posted on Tumblr, Archive of Our Own and even on Fanfiction.net, although FF.net prohibits RPF. onedirectionfanfiction.com is a large single-fandom archive. Around early December 2012, One Direction became one of the top 5 fandoms in the Music & Bands category on Archive of Our Own after reaching over 2400 works.[7] By September 2013 1D hit over 14,000 works to become the most popular fandom in the category, surpassing Bandom. 1D maintained the top position for years until late October 2016, before K-Pop fandom reached reached 47,700 works and took the top spot. 1D fell again to third place in March 2018, when BTS surpassed it by hitting 52,300 works.[8]

On the AO3, the vast majority of 1D fanfics are slash.[9] In contrast, onedirectionfanfiction.com contains 83% het stories, at least half of them featuring OFCs.[10]

The target audience of One Direction and other boy bands is tween girls, and anecdotal evidence suggests that a large portion of fans active on Tumblr and Twitter are indeed teenagers. However, there are older fans on these sites, as well as older fans on other platforms like LiveJournal complaining about 1D fandom being overrun by teenagers (see every 1D discussion on Fail Fandomanon). Fanfic archives appear to be largely segregated by age--Wattpad[11] and onedirectionfanfiction.com attract teenagers, whereas AO3 skews older.

Connections to Other Fandoms

In the very beginning, when One Direction was still on The X Factor, it was considered part of X Factor fandom. Early tagging on the Audiofic Archive, for example, lumped the two together.[13]

A large contingent of fans from Bandom (the six degrees of Pete Wentz American rock band fandom) migrated to 1D, so 1D is sometimes lumped in with that fandom, though there are few connections between 1D and those bands and none before the migration from Bandom started; it was reported that Fall Out Boy wrote music with (for?) 1D at one point in 2014, but those songs weren't on the album. 1D is technically a part of bandom in the broadest sense of the term (any fandom for a band), and although rock fans tend not to see boy bands as "real" bands or their music as "real" music[14], it is occasionally labeled as (a) bandom.[15][16][17]

The contributors to the Slash Report episode on One Direction described 1D fandom as "popslash 2.0".[18] Popslash was another RPF fandom that drew in media fans and others from outside the typical boyband fan demographic, and many fans who remember popslash in its heyday (early 2000s) have commented on 1D being a new incarnation of popslash. At least one (cyclogenesis) and probably a few popslashers wound up in 1D fandom, because they migrated to Bandom and some of Bandom migrated to 1D. However, there are several major differences between the situations of these two fandoms: popslash revolved around American singers, the acts' origins were not televised, online contact between stars and fans was nonexistent, and access to videos and still images of the bands was far more limited. The majority of active 1D fans are too young to remember popslash, and former popslashers do not seem to be a large presence in the new fandom. To hear popslash fans tell it now, popslash was also older, smaller, and lacking in tinhattery. Slash Report described 1D fandom as "worse than J2"[18] and said that many of the younger fans lack boundaries; in another episode, they commented that "It's basically a fandom that's 50% people who are the kind of people who would send a sex box to Michael Rosenbaum."[19] For older fans, they recommended finding like-minded Tumblr users to follow instead of tracking the fandom tags.[18]

1D has worked or interacted personally with a number of other current musicians, some of whom, like Taylor Swift, have their own existing fanbase, but often RPF fanfic about these other acts seems to have appeared only after their connection to 1D. See #Crossovers below. A notable exception is Justin Bieber, though in his case, the connection to 1D is tenuous.

Five band members make for 26 combinations for shipping in pairs and groups.[20] The most popular ship is Louis Tomlinson/Harry Styles, aka Larry Stylinson, but almost every possible ship has its adherents, including OT5. The boys are also shipped with people outside of the band, including both canon ships (past and present girlfriends) and noncanon ships. See also Crossovers.

The Larry Stylinson ship is notorious even outside of 1D fandom for the faction of shippers who believe that Harry and Louis are secret boyfriends in real life[21]. Other ships have also attracted tinhats, though not to the same extent. There is an active "X is real" tumblr tag for several pairings, including Zayn/Liam (ziam is real) and Harry/Niall (narry is real). However, some uses of the "X is real" tags are tongue-in-cheek. For specific tinhat theories, see Larry Is Real and Ziam Is Real.

Fans mostly agree on the smushnames for all ten intra-band pairings (see this Tumblr gif set by itsgottabe1d): 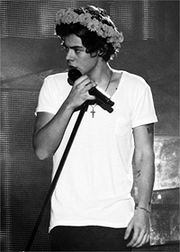 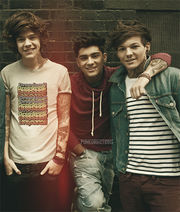 In 2012, teen.com ran a story making fun of the self-insert 1D member/OFC fanfic written by teenagers. They identified several types of stories: Girl Runs into 1D on the Street. NBD.; "I Saw Her Face in the Crowd and Can't Stop Thinking About Her"; One Direction Goes to High School... in America?; All the Boys Love [Insert Name Here]; Saved By 1D; 5 Girls, One Direction [25]

There are a lot of crossover fanworks based on 1D's known associations with other public figures. As of March 29, 2014, on the AO3, BBC Radio 1 was the most popular crossover fandom and Nick Grimshaw/Harry Styles was the most popular crossover pairing.[26] Crossovers with other bands include Little Mix (as Little Mix member Perrie Edwards was engaged to former 1D member Zayn), 5 Seconds of Summer (who toured with One Direction), and Union J (who competed in The X Factor two years after One Direction).[27]

In an example of fandoms crossing the streams, One Direction's 2011 hit single, What Makes You Beautiful, was used as the music in this clever, widely seen Sherlock (BBC) fanvid, Sherlock In Love, where it serves as the bouncy audio component to the vidder's reimagining the show as a romantic comedy.

Several books have been published based on One Direction fanfiction. Loving the Band by Emily Baker[28] was a direct pull-to-publish book by joint publication through Movellas, while Catch My Breath by M.J. O'Shea is allegedly only "inspired by" Larry Stylinson.[29]

In 2014, The Washington Post reported that After by imaginator1D, a popular Wattpad fic, would be published professionally.[30]

The popular fic Escapade received a publishing deal from Dreamspinner Press in November 2015.