For other definitions, see Bandom (disambiguation).

Bandom is the name given to a Real People Fiction fandom featuring a large but specific group of American bands, many of whom became popular in the mid 2000s. The three "core" bands are My Chemical Romance, Fall Out Boy, and Panic at the Disco. In this context, the term is a portmanteau of bandslash and fandom, though it is understood differently in other fan communities. See Bandom Terminology Debate. The term's first use is hard to pinpoint, but it first became popular in early 2007 when a new wave of fans became interested in the bands and their surrounding fandom.

The bands that make up Bandom are all interlinking, usually having developed a relationship through touring together, being on the same record label (specifically Fueled by Ramen/Decaydance), or having band members who were previously in other band together.[1] In fact, because of the degree of interconnectedness of these bands, many will, often jokingly, make reference to Six Degrees of Wentz, where all the bands can be linked back to Pete Wentz (bassist of Fall Out Boy) and each other with less than six degrees of separation. As a result, most of these band members will often appear in supporting roles even in fanworks not centered around their band, making crossover a popular genre (though intra-Bandom crossovers would not often be labeled as such).

See this flowchart of Bandom interconnections, created by wistfuljane as part of the comprehensive Subset Bandom Connection primer: 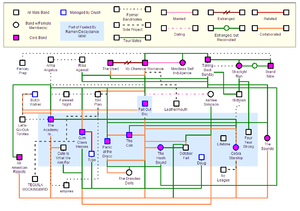 Many of the band members have been in bands prior to their current ones. Those bands are rather notable within Bandom, and include Pencey Prep, Midtown, and 504Plan.

Additionally, many of the band members have since moved on to new bands or solo projects and will occasionally be featured. Notable ones include Black Cards, Gerard Way and the Hormones, Frank Iero's multiple solo and side projects, I Don't Know How but They Found Me, among others.

Before Dreamwidth and AO3, Bandom lived on LiveJournal, where it slowly emerged from the primordial ooze of general band RPS around 2004-2006 and gained a sense of identity. Many key canon events for Bandom occurred around 2004-2007, including The Summer of Like in 2005, linking musically distinct bands together in a complex web of personal and professional relationships that defined the scope of Bandom. The name of the fandom also evolved from Bandslash to Bandom, though as it transpired, this name caused confusion with fans of other rock bands in 2007.

In the early 2000s, teenage music fans were writing RPF about the bands who played at Warped Tour and other popular rock acts. Fanfiction.net banned RPF in September 2002, around the time fandom was moving to LiveJournal, so while many fans congregated on message boards and archives, others posted (or cross-posted) their bandfic to LiveJournal communities like slashypunkboys. In July 2004 a community called rareslashpairs was created "for people who are sick of reading the regular Good Charlotte and Mest stories out there and are looking for something a little different. Here you can post stories about bands that are not written a lot about or cross overs from different bands." In the first month, fans posted a Fall Out Boy fic, a My Chemical Romance/The Used crossover, a Mest/The Used crossover, and a story about Geoff Rickly of Thursday, along with various other bands that were popular at the time. patrickxpeter, possibly the first Fall Out Boy slash comm, was also created in July 2004. A few months later, the band-specific comm mychemicalslash was created. In 2005, slashatthedisco (for PATD) and midnight-party (for FOB) were created.

As fannish excitement about the bands grew, adult fans created several smaller communities, often friendslocked and with moderated membership to keep out badfic and teenagers who frequented the general fic comms. Some of these fans were former Popslashers, including the mods of both yeahchemical and damnyouwentz. yeahchemical, an MCR comm, was created in 2005 and in turn inspired the creation in 2006 of damnyouwentz, a multi-band comm that may have been a significant factor in defining Bandom and encouraging its growth. In 2007 weemo_closet was created along similar lines as damnyouwentz, but with looser membership requirements. In July 2007, fans discussing damnyouwentz's restrictive membership policy noted that the explosion of Bandom on livejournal had already rendered these early closed communities irrelevant.[5] In the meantime, a whole slew of new bandom communities were being created with no such restrictions, including bandslashmania and bandflesh.

In a 2008 discussion about fanfic writing styles, kalpurna contrasted Bandom with Due South fandom (which started in 1994):

Bandom has no history, and the teenagers for whom this is their first fandom vastly outnumber the people who even know what a mailing list was. Not to mention the live canon and the RPS thing and the four hundred meta issues that I've never seen mentioned in any fandom before. (What do you do when an RPS subject replies to fic (directly, on LJ, logged into their own account) with "dialogue rings true"? WHAT?!) And all of these things, these young-fandom-characteristics, influence the fic in tiny imperceptible ways that you get used to without knowing what you're getting used to.[6]

In a 2009 discussion about the wankiness of Bandom, fans pointed to sidelining of BNFs and adult bandom communities as a possible factor:

The other thing is that there really wasn't centralization in the form of bandom BNFs. Initially there was, but when bandom grew so quickly almost overnight, a lot of the early fic writers stepped back/away for various reasons. So there was a massive influx of people into a fandom that isn't just splintered by pairings, the way others are, but by bands.[7]

Bandom grew exponentially, almost overnight. In the beginning, when it was a (relatively) small group of people in the fandom, there were set rules and standards that were similar to other online fandoms. There were a few centralized Elders/BNFs and they and their friends created the communities, hosted the challenges, and established the rules. And then suddenly, the number of people in the fandom had ballooned dramatically.[8]

Other fans contested the idea that more BNFs would have resulted in less wank, but one thing these meta discussions show is that Bandom was thought of as a single coherent fandom, which was not true before damnyouwentz. (If anything, thinking of itself as one fandom may have been a major source of Bandom's problems. See also Bandom Big Bang's endless rounds of arguments over which bands could be included.)

In 2007 fans were already distinguishing between two "waves" of bandslashers—the earlier, smaller group associated with DYW and the 2007 flood of newcomers.[9][10] makesmewannadie described the second wave as fans getting into Bandom "through the existing fans rather than through an initial interest in the music."[11]

However, from the vantage point of 2015, some fans described the history of Bandom as consisting of two main waves of fans, the first circa 2006-2009 and the second circa 2010-2013; the most popular pairings during the first wave were Pete/Patrick, Brendon/Ryan, and Frank/Gerard,[12] and the most popular pairings during the second wave were Frank/Gerard and Brendon/Spencer.[13] During the first wave, Panic! At the Disco was the most popular band for fanfic,[14][15] but when it split in 2009, everyone's OTP was ruined, so the fandom diminished considerably. Meanwhile Fall Out Boy went on indefinite hiatus in 2009, though later Patrick Stump released an EP and Pete Wentz toured with Black Cards so fandom didn't forget them completely. In 2010, MCR's album Danger Days: The True Lives of the Fabulous Killjoys ushered in the second wave of fans and spawned a lot of fic set in the AU world of the concept album. (This has happened before for other concept albums and single videos in bandom, but not in such a large volume or as such a distinct subset of the fandom.) MCR was then the most popular band in Bandom until its breakup in 2013, after which many of the denizens of Bandom slowly packed up and moved on to other fandoms. However, shortly before MCR broke up, FOB reformed, so there was still plenty of new Pete/Patrick fic, possibly representing a third wave.[16] This time also kicked off a small resurgence of one of the popular crossover pairings Pete/Mikey, as many fans attributed one of the new FOB songs to the supposed relationship they had in the past, circa 2005.

As of 2017, the fandom's big bang challenge is still running, though it is considerably smaller. Meanwhile, fan activity for many of the Bandom bands continues on Tumblr, with many fans not old enough to have participated in the earlier waves of Bandom. Both PATD and FOB are still touring, and MCR fandom appears to have had too much momentum to have stopped when the band did.

There have been multiple pushes to include new bands and singer/song writers in bandom. The most notable of these is Twenty One Pilots, whose rise coincided with the resurgence of FOB. Others include Halsey, Melanie Martinez, and occasionally Troye Sivan. People often refer to the MCR, FOB, P!ATD, and TOP fandoms together as the "Emo Quartet" as opposed to the "Emo Trinity." In addition, a newer wave of bandom appears to be sprouting among fans of the bands Palaye Royale, Waterparks, and other relatively new pop-punk bands.

Because the majority of the musicians in the bands are male, slash is the most common fanwork genre, though gen, het and femslash can be found (often featuring the female musicians and more commonly the wives and girlfriends (WAGs) of the male musicians).

There are many popular pairings in bandom, both intra-band and inter-band, the latter of which are sometimes referred to as crossover pairings. The most popular pairings are usually based on band members' public or fan-perceived relationships with each other.

Almost any conceivable pairing can be found, and many fans don their tin hats and promote their favourite pairing using picspams, vidspams, and quotes to illustrate the connection between the band members involved. Individual pairing love is encouraged, and ship wars are almost non-existent. bandom_ships is a community created to celebrate one's OTP, OT3 or GSF with ship manifestos, much like the multi-fandom LiveJournal community ship_manifesto.

Unlike many other fandoms, bandom pairings are not usually referred to by a portmanteau, though some pairings, often the most popular ones, do have such commonly-used names. For example:

It must be noted that while many early Bandom fans shared a dislike for smushnames,[22] associating the terms with low quality fic and tinhatting,[23] the relative decline of journal-based fandoms, the rise of Tumblr and Wattpad and the influx of newer fans have democratized the use of smushnames. See dedicated Tumblr communities such as:

A large subset of bandom fic features stories or universes in which multiple bands and pairings can be found. These can be either canon-based stories (commonly set during tours while the bands were out on the road together) or AUs. The various pairings might occur in the same story or be showcased in different parts of the same verse.

Many bandom fics that focus on the members of one band will also mention members of one or more other bands, or focus on one inter-band pairing, with the majority of the background characters pulled from one or the other of the main characters' bands. However, some bandom authors seem to be in a competition to include as many musicians from as many bandom bands as possible, pairing up many of them with each other. For example:

The Fourth Wall in Bandom has been described as being "more like a fringe curtain."[24] There exist numerous occurrences of bands acknowledging fandom and commenting on fan activities, as well as extensive debate amongst fans as to appropriate behaviour relating to maintaining the Fourth Wall - or not. The fourth wall has changed even more with the advent of streaming, something which P!ATD frontman Brendon Urie has done often on his Twitch channel.

See The Fourth Wall in Bandom for detail.