Gabilliam (a portmanteau of Gabe/William) is the pairing name for the real-person fiction pairing of Gabe Saporta (of Cobra Starship) and William Beckett (of The Academy Is...), two of the "second tier" Bandom bands. 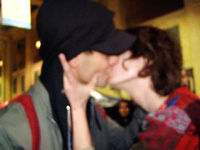 Photograph of Gabe and William kissing. Despite its blurriness, the photo is thought to be genuine.

Both Gabe and William have been good-humored about and even supportive of the Gabilliam ship.

In a 2006 video when fans explain to Gabe what Treckett means, Gabe replies: "Now my question is, where do I fall into that? 'Cause I don’t see a Greckett, or a Treckgabe..."[1]

Gabe and William have also posed with (presumably fan-made) "I love William" and "I love Gabe" signs, respectively.

In a June 2012 interview, when asked about his "favorite rumor" about himself, William responded: "I love all... all rumors. Particularly Gabilliam ones are pretty funny. They're pretty funny. And... mostly untrue."[2] In 2014, William posted old photos of himself and Gabe with captions "Gabilliam" and "Still shipping." on his Instagram.[3]