The Academy Is... (TAI) was an American rock band signed to Fueled by Ramen and Decaydance, and is considered part of Bandom. 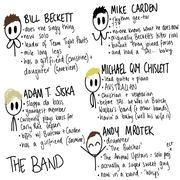 Overview of the band by badlydrawnbandguys (2013).

TAI was discovered in 2004 by Pete Wentz, who convinced Fueled By Ramen to sign them. Their success then inspired Wentz to create his own label, Decaydance.

The final line-up of the band was William Beckett, Mike Carden, Andy Mrotek aka "The Butcher", Adam T. Siska aka "Sisky" and Michael Guy Chislett. Notable former members and associated friends include Tom Conrad (who went on to Empires), Jack Edinger aka "Jack the Camera Guy" and Jon Walker (TAI photographer and guitar tech who then joined Panic! at the Disco).

TAI created a web series, TAI TV, some of which can be seen here.

As of Sept 27, 2014, there were 658 works tagged 'The Academy Is...' on AO3.[1] However, the heyday of Bandom predates AO3 and it is likely that stories were written on Livejournal or elsewhere that have not been re-posted there.

The most popular TAI pairings are crossovers with members of other bands: