Tinhat is a fannish term for a fan who believes that the people or characters they ship together are really a couple, but are being forced by The Powers That Be to keep their relationship a secret. Tinhats and tinhatting are usually associated with RPF fandoms, but tinhatting in fiction media fandoms (film, television, etc.) also happens. A lot of tinhat theories are based on fantasies of closeted celebrities (usually actors) who are unable to be open about their relationship in their profession. However, tinhatting of different-sex pairings does occur (and predates the term itself).

The term itself is derived from the stereotype of conspiracy theorists and other paranoid people wearing tinfoil hats to protect themselves from telepathic, microwave or radio transmissions by aliens, the government, or both.[note 1]

The term can refer to the stylish accessory or, by metonymy, to the fan who wears it. It can also be used to refer to any fans who deliberately ignore parts of a canon they dislike in order to continue enjoying the media, for example bad writing, questionable relationship choices, etc.

The phrase "tinfoil hats" has been widely used in pop culture since at least the 80s, with the characters in Signs wearing them to protect aliens from reading their minds.[1] In general use, the term "tinfoil hats" is used derogatorily towards individuals who believe in wild or outlandish things.[2]

Thus, when the DomLijah tinhatters began to be seen as a problem by others in their fandom, they were referred to as the "tinfoil hat crowd."[3] In April of 2003, cesare asked DL-anon for "a snappy sobriquet for the hardcore tru believas" who claimed that the The Lord of the Rings movie actors Elijah Wood and Dominic Monaghan were secretly in love.[3] In a thread under the post, Versaphile and phosfate had the following exchange:


I'd suggest "Asshats" but that's really too generic.

This makes me think of the Tin Man from Oz, but he needed a heart, and these people need brains. Scarecrow?

Oo, ohh! Wormtongues! No, that sounds too much like Harry Potter...


My head seems to have adopted 'Tinhats' overnight.

which is the first known usage of "tinhat" in the way this page describes. More recently, however, the term "tinfoil hat" has been truncated to "tinhat" within the popular culture.[4]

General Use of "Tinhat" in Fandom

After Domlijah, the term tinhats was adopted by fans in many fandoms to describe similar conspiracy theorists and believers. The term is more likely to be used by nonbelievers than the fans in question, though it depends[5]. Fans sometimes use the tinhat terminology ironically or self-deprecatingly; when they are squeeing especially loudly over some piece of celebrity gossip or a new leak of an upcoming season, they may type *dons tinhat* or *polishes tinhat*. These fans seldom mean they really believe that their preferred OTP is a couple in real life.

The term is not synonymous with being an RPF shipper, despite many people's misconception that it is, as most RPF shippers of non-canon celebrity pairings do not believe that the ship is real. Many RPF fanfic contain an explicit disclaimer in the header emphasizing that the story is fiction and denying any implication that the writer thinks the people in question are actually a couple. It's actually considered poor etiquette in many RPF fandoms to mention the topic of shipping, in order to preserve the fourth wall, which is why tinhat is often considered a derogatory term. And, independent of the fourth wall, some fans consider the term to be objectionable on the grounds that it is often accompanied by negative perceptions about those suffering from clinical paranoia, persecutory delusions, or anxiety.[6] Others disagree, pointing to tinhats' long history of being used to describe conspiracy theorists and firm believers in non-proven, fictional or far-fetched theories, and is not used to describe mental health difficulties. [7][8]

Much as tinhatting in an RPF fandom often involves the narrative of celebrities being forced to be closeted, tinhatting in fictional media such as TV and film is most often the result of fans buying into queerbaiting subtext and declaring it to be text. This is also true of het pairings where fans will read romantic subtext into relationships between characters and then declare those ships to be real.

Tinhats and the Fourth Wall

The fourth wall is important in any fandom, but it's especially important in RPF fandoms where it's considered taboo to talk about shipping to the people involved. The problem with the Fourth Wall in relation to tinhatting is two-fold: there are some tinhats who make no effort to hide their beliefs or attempts to spread "the truth" and there are creators who make no attempt to hide their derision for fans.

See Tinhats and the Fourth Wall for more. 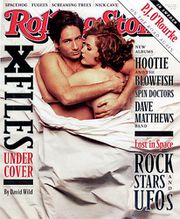 Evidently someone thought this May 1996 cover of "Rolling Stone" showing David Duchovny and Gillian Anderson in bed was a candid.