Glee is a musical comedy-drama that aired on the Fox network from 2009 to 2015. The series focused on the members of a high school glee club and their rivals. Glee was almost immediately a source of interest to fandom. Many fans enjoyed the musical numbers (sometimes more than the plot of any individual episode), and the inclusion of nonwhite, disabled, and LGBT characters made Glee deeply appealing to viewers.

However, Glee often came under fire for how it handled these characters, and some fans feel that there was too much focus on the white male characters.[1] Glee has also been criticized of biphobia.[2][3] However, this has not detracted from its popularity, as Glee remains one of the most prominent fandoms of the 2010s. It has the the second-most number of fanfiction written about it out of ANY tv show fandom on FanFiction.Net, behind only Supernatural with, as of May 2017, 109K fics. 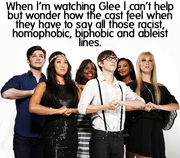 An example of many of the criticisms leveled against Glee.
Archive of Our Own has some other TV shows with more fics, but Glee maintains a steady presence on the site, with 31,241 fics as of May 2017 and more added all the time.

Glee's diverse cast makes it easy for one to become a fan of the show, however certain characters are definitely more popular within the fandom than others.

Kurt Hummel is openly gay, and is the most popular character, as well as one of the ultimate main characters of all 6 seasons of the show.

The creator of the show, Ryan Murphy, wrote in the character of Kurt after being impressed by Chris Colfer's audition for Artie, and bases some of Kurt based on his own experiences as a gay man.[4][5]

Rachel Berry is the ultimate main character of the show over the course of all six seasons. In the pilot, she was important but it appeared that Will Schuester or Finn may be more of a main character, but by the time season 4 started airing, it seemed clear that Rachel was the character who the show was focused on the most. Kurt and Rachel became the main focus of the show by the end. In the earlier seasons, many people had strong feelings against this selfish and driven girl, but almost every character on Glee has been subject to quite a bit of polarizing opinions. Rachel is the third-most written about character on Glee, and Rachel Berry/Quinn Fabray aka Faberry is the most popular ship in fanfiction for her. The second-most popular ship for her, and the #1 most popular one in fanvideos is Finn/Rachel, and Rachel also is popularly shipped with Puck, Jesse, Sam, and Santana.

Blaine Anderson was added to the show in season 2, and is best known as Kurt's crush and then boyfriend throughout most of the show. This shy and nerdy character is quite popular due to the Klaine shippers as well as the popularity of actor Darren Criss (who first rose to fannish attention as the star of A Very Potter Musical).

Finn Hudson was most popular for the "Finchel" ship - Finn/Rachel were shipped by certain fans as early as the pilot, and continue to be popular to this day. There were also Finn/Kurt shippers early on, and Finn/Puck shippers, which made some sense since Finn & Puck were best friends and because Kurt canonically had a crush on Finn. Finn and Kurt later became canon step brothers, and the Hudson-Hummel family is one of the most popular things to write about in fics, including in many Klaine or Finchel fics. Finn's character frequently acted homophobic in seasons 1 and 2, and his character had tendency for double standards, so early on he may have been fairly unpopular in certain aspects of fandom. Finn was always consistently portrayed as a bit of an idiot. He became a very lovable idiot, though, and was arguably the #1 main character of the show. He graduated high school and joined the army because he wasn't sure what else to do with his life, and then was kicked out of the army for an accident while cleaning his gun, and his journey of not knowing what he wanted to do with his life was very sympathetic and something a lot of fans could relate to. The actor who portrayed Finn, Cory Monteith, had to stop acting in season 4 a little early because he needed to check himself into rehab for a relapse of his drug addictions, so the script for episode 4x21 "Wonder-ful" was re-written to include a Rachel & Will phone call where Rachel excitedly informs her teacher that she got a callback for her dream Broadway show, rather than Rachel thanking Finn for helping her think of the perfect way to audition. Finn's final episode on the show ended up being episode 4x19 "Sweet Dreams", because then, in the summer between seasons 4 and 5 in July 2013, Cory Monteith died - he overdosed by consuming a toxic combination of heroin and alcohol. In October 2013, Glee aired season 5, episode 3, "The Quarterback", as a way to have his character of Finn die too, and be mourned. Throughout season 5 there were references to Finn. His legacy was supposed to be following in Will Schuester's footsteps and leading a high school Glee club of his own as a teacher at the end of the series, but with his death, showrunner Ryan Murphy had to come up with a new ending for Glee instead.

Quinn Fabray as a character is both popular and well hated. Her most popular ships are the canon Quinn/Puck and the AU femslash Quinn/Rachel. Due to lack of continuity with the character's development, fans of the show are quite polar about Quinn. The consensus is that you either hate her or love her. Quinn is best known for her pregnancy in season 1, which was the major story arc of the season. Quinn whilst pregnant. Quinn's storyline during season three also resulted in her being in a wheelchair due to an accident on the way to Rachel & Finn's wedding. She recovered by the end of the season and in season 4 was no longer a main character, having left Lima, Ohio to attend Yale University, only returning to Lima a few times in seasons 4 & 5, and once she also visited New York where Rachel lived. There was some outrage at Quinn not appearing in 5x03 "The Quarterback", the episode tribute to Finn's death, where Brittany didn't return for understandable reasons (Heather Morris's real life pregnancy) but all of the other main characters who had left the show and who had loved Finn were featured - Emma, Mike, Puck, Mercedes - and it confused fans as to why Quinn didn't appear, some thinking the showrunners hated Dianna Agron, the actress who portrayed her, and rudely didn't ask her back. Dianna has been diplomatic about the matter. Quinn had a brief scene of acknowledgement of her ex-boyfriend's death in episode 5x12 "100".

Tina Cohen-Chang is a character oft forgot about in the show. Her main claim to fame is her faked stutter during Season 1 and her ties to Artie, and later her much longer-lasting relationship with Mike Chang. Tina is well known in the fandom as the person who has no lines nor songs, and so it is often met with surprise when she has either, and especially when she has both. Her character became very frustrated with the fact that she was often overlooked in the later seasons, a type of fanservice and breaking of the fourth wall, perhaps. She became obsessed with a crush on Blaine, a gay character who could not and did not return her feelings, and later just became very close friends with both him and Sam. She graduated high school in season 5 and went off to Brown University.

Mike Chang is the character best known for his dancing and his abs. He too is one of the minor characters in the show, and appears to have a lower popularity because of it.

Noah 'Puck' Puckerman is the self-proclaimed 'badass' of the show. Most famous for his role in Quinn's pregnancy, Puck is most popular in the fandom with the shippers of Puckleberry, Quick or Puck/Kurt. He is also well known for his skill with the guitar, and his season 3 on-screen affair with teacher Shelby Corcoran, who was the adoptive mother of his daughter. He was best friends with Finn throughout much of the show, despite a period of being enemies because Puck had slept with Finn's girlfriend at the time, Quinn, and gotten her pregnant. In season 4, Puck was revealed to have a half-brother he didn't know about, Jake Puckerman. Ultimately Puck mourned Finn's death very hard in episode 5x03 "The Quarterback". He also got officially started dating Quinn for the very first time in season 5, despite their sex prior to the pilot and romantic subplots in seasons 1 and 3.

Brittany S. Pierce is the cheerleader best known for her childish innocence. She is the idiot of the show, portrayed as particularly stupid. Her one-liners make her famous, as well as her relationship with Santana Lopez. Brittany has never had a prominent storyline. Brittany is well-loved in the fandom.

Santana Lopez derives from Lima Heights Adjacent, and is the sarcastic bitch everyone loves to hate. Like Quinn, fans of the show are polar in their opinion of her, some absolutely loving her character, others absolutely hating. In the fandom, supporters mainly derive from the Pezberry, Brittana and Pucktana shippers.

Artie Abrams appears to be a moderately popular character. Known due to his storylines involving his being in a wheelchair, Artie is one of the more "nerdy" characters.

Sam Evans is the Trouty-Mouthed boy who joined the show in the beginning of season 2. Known for his kindness and boy-next-door type personality, Sam is quite well liked within the fandom. He is known for his numerous ships as well - Samcedes, Kum (Kurt/Sam), Fabrevans, Samtana, etc.

Will Shuester is the leader of the Glee Club, and in the fandom, very few like him. Often referred to as "Paedo-Will", many question his role in the show and his relationship with the students, specifically when Shuester asks Finn to be his best man at the wedding. Will is widely disliked and this unites the often squabbling fandom.

Sue Sylvester is the cheerleading coach at William McKinley High. She is best known for her repetitive storyline - attempting to destroy the Glee Club. Again, this character is moderately popular due to her unusual yet funny lines and the rare moments in which she shows her humanity.

The most popular ship in the fandom is probably Kurt/Blaine, but there are supporters of any and all romantic character combinations. Like many fandoms popular on Tumblr, Glee ships almost invariably have portmanteau nicknames:

Numerous and often, ship wars are arguments between fans who support different ships, and are especially common when two pairings have a character in common. A recent example of this is the ship war between the "Klainers" (who support Kurt/Blaine) and the "Kum" shippers (who support Kurt/Sam). Ship wars are particularly vicious within the Glee fandom, and can last quite a long time. Many occur on Tumblr, and can quickly turn personal.

One reoccurring ship war topic involves the "Kurtofsky" (Kurt/Karofsky) ship, which has attracted negative attention due to some fans' perception that Dave Karofsky was a sexual predator. (See: Kurtofsky Wanks.)

As of 2012, Glee had the greatest number of fanfiction of any television fandom on FanFiction.net and still has the second-most on the site.[6] Many very popular fanfiction authors have come to fame due to Glee fanfiction, including CP Coulter,[7] author of the Klaine Fanfiction Dalton.[8] Others include Neaf and beautifulwhatsyourhurry.