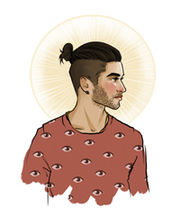 January 2015 digital drawing of Zayn by Tumblr user vulcains; one of several fan artworks retweeted by Zayn. He called this one "sick" (in a good way).

Zayn Malik is an English singer. Until his departure on March 25, 2015, he was a member of the boy band One Direction. See Wikipedia for details.

Zayn was cast as the "mysterious bad boy" in accordance with the boyband tradition of differentiating the personalities of each member. The media and parts of fandom appear to have bought into this conceit and run with it. However, many fans have argued that he is a sweetheart[1] and "bad boy Zayn" contradicts everything the other band members say about him as well as his own actions (for example, he bought his mother a house). The origins of the "bad boy" image may include stereotypes about introverts and the fact that he was a smoker, but fans and other observers have argued that this image is perpetuated by racism and Islamophobia.

Zayn was the only non-white member and the only Muslim member of the band. He also seems to have borne the brunt of negative comments from fans and the media. Rumors seem to stick to him more than the others. For example, some fans pointed to the unfairness that Zayn was singled out for smoking pot in the infamous May 2014 weed video, in which Louis was not only also smoking, but also could be heard using what most people think was the N word. Media outlets focused on Zayn's behavior, and suggestions that he should go to prison trended on Twitter. Perhaps based on this video, or perhaps based on the media's requirement for boyband narratives, rumours that Zayn had a drug problem circulated when he had to skip a public appearance due to illness. Meanwhile, it appeared that Louis was very possibly a pothead, and no one cared.

Many RPF fans accepted the "mysterious bad boy" characterization and wrote it into their fanfic. However, this does not mean that every fic featuring "bad boy Zayn" is evidence of racism. A lot of fans learn about canon through reading existing fic and then go on to write their own fic using what fanon they know.

Fandom had a variety of reactions to the news that Zayn had left the band: on top of overwhelming sadness and grief, many felt betrayed and angry. Despite statements from Zayn and the band (specifically Liam) assuring the fans that both sides remained on good terms, the messiness of the situation in the days immediately following created a lot of tensions within the fandom. Both ex-fiancée Perrie Edwards and producer Naughty Boy were the targets of vicious attacks on social media, blaming them for the decision.

Round 3 of the One Direction Big Bang, which was posting during March 2015, allowed authors and artists to change their posting date or even to refrain from posting entirely after Zayn's departure.

Because this is such a tough time for all fans of One Direction, we have notified all remaining authors and artists that they have the option of changing their posting dates to allow for a “moment of silence,” so to speak, so that everyone (contributors and readers alike) can regroup, and participants can put their works forth when people are feeling less shell-shocked.[2]

According to an update in May, "Some authors decided to withdraw/not post or delete their fics, with our express permission, after Zayn left the band, largely because their posting dates were so close to everything that happened in March (though some were no longer interested in sharing their fics at all, which is entirely their prerogative and which we fully support)."[3]

Fans' reactions to the news were the focus of quite a lot of media attention in the days following, as mainstream media reported with varying degrees of sensibility on the fans' collective grief and its various manifestations.

There was also a meme created by a Bandom fan that joked that Ryan Ross, a former member of Panic! at the Disco, would be replacing Zayn as the new 1D member. This joke was taken seriously by some 1D fans and minor news outlets, leading to Directioners declaring that they would never accept a replacement for Zayn.

On the Archive of Our Own, Zayn is most often shipped with Liam Payne (Ziam): 8624 works.

The most popular Zayn het ship on the archive is with his real-life ex-fiancée, Perrie Edwards of Little Mix: in 2018 there are 1562 fanworks tagged with Zayn/Perrie. However, the vast majority of these fanworks appear to include them only as a side pairing.[4]

Zayn/Liam is also a common side pairing in stories about someone else (commonly Larry), but not to the same extent.[5]

Some One Direction tinhats believe that "Zerrie is fake"[6] and that "Ziam is real." See Ziam is real for more details. 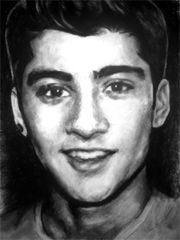 A lot of heart-breaking fanart was posted in the days immediately before and after Zayn's official announcement that he was out of the band, for example: