Harry Styles, aka the one with the hair, is an English singer and most well-known member of the boyband One Direction. He was born in 1994. See Wikipedia for details.

The most popular Harry ship (and the juggernaut ship of the fandom) is with fellow 1D member Louis Tomlinson, a ship known by some as Larry Stylinson.

Fans also ship Harry with the other members of 1D (Zarry with Zayn Malik, Narry with Niall Horan and Lirry with Liam Payne), as well as other people associated with the band, such as videographer Ben Winston or photographer Cal Aurand. He might also be shipped with friends like Ed Sheeran and Jeff Azoff (Hazoff).[2][3][4][5][6][7]

Outside of the band, he is mainly shipped in Radio 1 RPF fandom with presenter and friend Nick Grimshaw (See: Gryles).[8]

Some fans just (jokingly) ship Harry with all men he's ever met. See HARRY WITH MEN: A MASTERPOST by caramelfringe and Harry with men is the most important thing in the WORLD!!!!!! by cocoalou.

All the popular Harry ships are slash; however, there is a large volume of het fanfiction about him on the internet. Most of it appears to be self-insert imagines, but a few stories focus on his short canonical relationship with X Factor presenter Caroline Flack[9] (Haroline) and his appearances with Taylor Swift (Haylor) and Kendall Jenner (Hendall).[10] 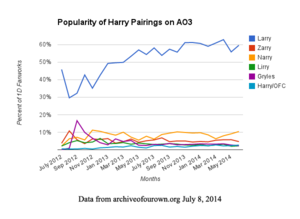 Popularity of different Harry pairings on AO3 July 2012-June 2014. The rarity of Harry/Original Female Character here is due to site demographics; 1D het fic is more likely to be found on Wattpad or onedirectionfanfiction.com

In general, fandom agrees that Harry is a ray of sunshine skipping through the daisies who doesn't have a mean bone in his body. For example, see this vid comparing his tweets to those of the other band members: two types of people (posted February 13, 2014).

In fanworks, he is often characterized as polite, friendly, outgoing, sweet, and flirtatious (or innocent and naive, or innocently flirtatious and naive). Sweet and innocent Harry is known as Cupcake Harry (bears a resemblance to actual Harry, but with fewer sexual innuendos and crotch grabs). He usually very tactile and, in fic where another character is pining over him, likely oblivious to the effect he has on them.

A lot of fanfic also makes him promiscuous (likely based on tabloid gossip, plus the requirements of tourfic). See this fanfic example of Cupcake Harry characterization with added promiscuity, where Harry has accidentally scheduled two hookups for the same night:

Harry must see Niall's exasperation, because very carefully and as if any of it makes sense, he explains, "I had the first girl set up since yesterday and then when the other one turned up backstage today she was really fit and I just forgot about the first one. They're going to show up in five minutes, Niall, both of them, I just need you to take one off my hands."

Niall looks at Harry's earnest face and puts his head in the crook of Harry's neck. Harry smells kind of sweaty, but he's really comfortable. "You need sleep, Harry. Just send one of them home. No, send 'em both home, you need a night off."

He is depicted as easily accepting of his own and other people's sexuality (not contradicted by canon), and in slash sometimes assumed to be bisexual or otherwise attracted to same and different genders (confirmed in his music and interviews).

There are, of course, some examples of this characterization no longer being appreciated or desireable, as Tumblr user theboycanthelpit addresses in this post (December 28, 2014):

Harry is very good at letting himself be whatever people want him to be. I’ve always found him hard to write because he’s so layered, and I feel like we rarely get a good look at who he is under layers and layers of being whatever people want him to be.… …I am fascinated by the Harry who nearly killed himself on 1D day, and dances when he gets off planes, and eats food off the floor, and steals people’s children and renames them Eric, and screws up, and dances with Niall, and punches unsuspecting Liams, and says he likes girls who don’t wear makeup, and throws pouty little fits. The one who, back on the TMH tour, whispered an answer to the question “What don’t you like to eat?” to Zayn, and it was “pussy.” The one who, on the X-Factor finale, told whatshisname ON MIC, “think of all the pussy you’re gonna get.” That dude is FASCINATING and kind of dirty and not at all perfect, and I love him. But I forget that sometimes, because what gets retumbled usually is (some of tumblr) fandom’s sanitized, perfect, saintly, pronoun-game-playing, teflon Harry.

Harry has a fanon twin, sometimes named Edward. See the Edward Styles AO3 tag, plus the styles twins and edward styles Tumblr tags. Occasionally they are triplets, with Marcel as the third brother.

There are a few counter trends in characterization: