From Fanlore
(Redirected from Harry/Louis)
Jump to: navigation, search

This page is dedicated to shipping practices, popularity, tropes and fanworks about the pairing. For information about theories and debates regarding the reality of the pairing, see: Larry is Real.

Larry Stylinson, a portmanteau of Harry Styles and Louis Tomlinson, is the pairing name for the most popular ship in One Direction fandom. This ship is notorious even outside of 1D fandom for the large number of Larry shippers who believe that Harry and Louis are secret boyfriends in real life. However, the portmanteau itself is notorious for confusing non-1D fans into thinking that "Larry Stylinson" is one of the members of the band.

My first real crush was Louis Tomlinson. It's mutual, we've discussed it. Popular gif of a popular video clip

Like the other slash pairings within the band, the canon basis for Larry is the camaraderie and physical affection that Harry and Louis displayed in public, often captured in photos and videos. Given that Harry is the fan favorite, it was inevitable that the most popular pairing would involve him.

Since November 2010 Harry and Louis were also aware that fans were shipping them together[2][3] and may have played up their friendship in the early years. (See Fanservice.) Harry said things like "My first real crush was Louis Tomlinson".[4] At a fan event Harry appeared to nod and smile when a fan asked him if he and Louis were dating.[5] Harry and Louis also lived together at some point in 2011-2012 and would tweet to and about each other; see for example Louis' Always In My Heart tweet. (According to bulletprooflarry, they lived together from July 2011 until at least September 2012.[6])

1D fans have commented that at that time they appeared to be the closest and most affectionate of the band members:

Harry and Louis were the only ones to move in together after forming the band, and they tweeted about being domestic together and cuddling up in bed watching TV or whatever, and their moms and other people talked about how inseparable they were. Of the possible pairs they seemed especially snuggly and close. Also, there's no graceful way to say this, but, well, I think Louis pings quite a few people as gay (or he fits some of the stereotypes). Harry struck a lot of people as potentially gay or bi because he seemed to go out of his way to use gender-neutral pronouns when the group got asked the typical boy band questions, like "What do you look for in a girl?" and he comes across as pretty laid-back about sexuality in general.[7]

Larries, who believe that Harry and Louis really are dating, also developed the theory that they have six sets of complementary tattoos (which Larries thought was cute and shippy). See Larry_Is_Real/Theories#Tattoos for more details.

However, at some point in 2012-2013, fans noticed that slashy canon moments between the two had decreased compared to the others. (Many fans speculated that management was to blame; other fans argued that this was the fault of fans who made too big a deal of their friendship. In an interview with the Sun in 2017, Louis explained that the shipping "took away the vibe [...] I think on both fences, a little bit more unapproachable."[8] See Larry is real.) In fact, Harry and Louis were very rarely seen to touch each other (or even stand next to each other) until 2015 when fans started reporting excitedly that they seemed to have relaxed slightly.[9] But the disappearance of canon support never affected the popularity of the ship; Larry remains the most popular ship in the fandom, slash or otherwise.

Some Larry shippers, later known as Larries, believe that "Larry is real". Larries have developed the theory that One Direction's management company (Modest! Management) has pressured them to remain closeted because gay bandmembers would bring down the monetary value of a boyband in a homophobic industry. In the early years, when Louis' dating life wasn't newsworthy and fans may not have known who his girlfriends were, thinking they were in a relationship did not contradict what little fandom knew about them. But as more counter-evidence appeared, the secret-boyfriends theory became increasingly elaborate. The similarities between the relationship narrative constructed by these fans and the story promulgated by the Domlijah tinhats in Lotrips fandom in the early 2000s have led to these Larry shippers being called tinhats by other fans.[10]

An Argentina Coca-Cola commercial released in April 2015 depicted two actors who bore resemblance to (and was later confirmed to represent)Harry and Louis. It played over Clouds, a One Direction song that was considered by some fans to be related to Larry.

I was just watching this commercial with two ladies, one was standing in front of a Pepsi vending machine and her friend was in front of a Coke vending machine. The announcer was talking about how you can win tickets to concerts of your choice, but only with Pepsi. The girl with the Pepsi bottle was happy, but her friend had a Coke bottle so she said at least it has your name on it. Coke girl replied “do I look like a Larry to you”. I laughed so hard there were tears in my eyes. 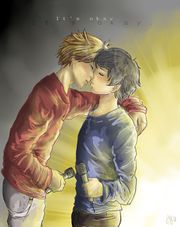 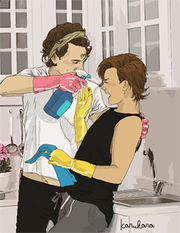 The 10 fics under Louis Tomlinson/Harry Styles with the most Kudos on Archive of Our Own as of 3/5/2021 are: