From Fanlore
< Larry Is Real
Jump to navigation Jump to search

The dedicated believers of Larry Is Real have done a great deal of theorizing about Louis and Harry's relationship. Aside from the attention larries have gained outside of Larry fans and fandom as a whole, there is a great deal lore discussed among larries.

The subset of Larry shippers who believe or at least entertain the possibility of Larry being real have developed their own fannish terminology. While some of this vocabulary is also used by other 1D fans (often to discuss Larries), some is not.

Your hand fits in mine
Like it’s made just for me
fanart by evenasyoungastheyare (original, 2015), depicting Louis and Harry's rope and anchor tattoos. 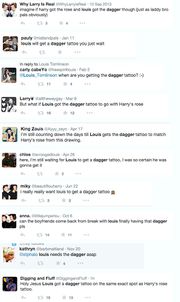 Screenshot of larrie predictions for Louis getting a dagger tattoo and their excited reactions when he finally got one. (2014)

Many fans who think that Larry is real believe that a number of the tattoos Harry and Louis got from 2012 onward are couples' tattoos. bulletprooflarry kept a frequently referenced tumblr masterpost called Timeline: Tattoos to Date.[13] daisiesonafield, whose blog includes a number of larrie resources, has a tattoos tag with more masterposts.

The ones referenced most often are the ship and compass [14], rope and anchor, heart and arrow, and rose and dagger[15]. Other complimentary tattoos include Lock and Key and Bird and Birdcage.

But I kept coming back to the tattoos. No one would permanently ink their skin with such meaningful symbols for just marketing. And please anyone who thinks the tattoos are coincidence needs to relearn the meaning of the word. Forget all the 6, just the 3-ship/compass, anchor/rope and Rose dagger are enough to convince one. Especially if you know the context and timing surrounding these tattoos.

Non-larries for the most part do not see these tattoos as intentionally complementary, if they are aware of the larrie theories at all. Some anti-larries have proposed alternate explanations for them. See tumblr anti-larrie 1arry-isnt-rea1's masterpost of the Larrie tattoo theories: Complementary/Matching Tattoos (29 Dec 2014). Basically, the argument is that the tattoos are likely coincidences because they were often acquired months or even years apart and are individually very common tattoo themes; since Harry and Louis each have so many tattoos, it's inevitable that some of them could be interpreted as matching. Meanwhile, the argument against the Oops/Hi tattoo theory is that it's pure fanon invented by larries and not complementary at all.[16] In 2020 an anonymous person on fail_fandomanon was especially annoyed at how the Oops/Hi origin story had become common knowledge despite not being based on fact:

This type of fifth-generation echo chamber through channels that are usually reliable, or through "just everyone knowing", because that's the "information" that has overwhelmed any searches, comment sections, twitters, youtube... It's all originally coming from the "real" larries, who managed to have enough momentum to pass that saturation threshold all over the web, and now the new generations coming in come straight to the lies; come FOR the lies; because that's the only game in town. Those teen larries certainly were not there when the tinhatting was born, nor even when the band was together. All they've learned is alternative truth, and they're totally eager and guileless.[17]

This chart is a list of six pairs of tattoos most commonly agreed to be complementary by Larries:

In 2019 Louis Tomlinson did a video for GQ explaining his tattoos.[18] Larries found it suspicious that Louis's explanation for the "Larry" tattoos included phrases like "random," "Have no reasoning behind [them]," and "no meaning behind that one." Due to this the majority of the comment section is filled with Larries saying things like, "Ladies and gentlemen Here is Louis Tomlinson, the best liar you've ever seen," "I didn't know that Harry changed his name to 'No reason,'" "there's only one person that could match this level of avoidance and he has the other half of these tattoos."[19] Tumblr larrie daisiesonafield has a tag called Louis lying about his tattoos for 6 minutes. This post collects some larrie youtube comments.[20]

Both Harry and Louis have written songs that fans speculate may be about their relationship, including Don't Let Me Go, Something Great, Strong, If I Could Fly, Home, Two Ghosts and Sweet Creature. See bulletprooflarry's brief analysis of songs over time, "Character Development"[21]

1D bandmembers have all made lyric changes during their live shows that fans noticed and commented on. While most fans assume these changes are done as jokes, larries believe that some of the lyric changes made by Harry and Louis may be either Larry-baiting or references to their relationship.

Larries also find it significant that Harry and Louis sometimes sang at each each other onstage, most notably Little Things.[citation needed]

The colors blue and green have come to be associated with Louis (blue) and Harry (green) by larries. These are the colors used to identify their microphones, as well as their eye color. Each member of One Direction had a color-coded microphone that was visible in many concert photos and became well-known to fans: red for Liam, yellow for Zayn, green for Harry, blue for Louis, and the Irish flag for Niall.

Larries also felt that the blue and green stickers sometimes appearing on Rainbow Bondage Bear were a sign from Larry.

The Bandana Project assigned bandana colors according to 1D's mic colors, with the exception of Niall. Larries kept track of every time Harry wore a blue bandana after the project happened.

Here's an example of a larrie poem about Harry/Louis: when green eyes met blue, Archived version

Bluegreener is a derogatory term for larries who take things too far, aka the kind of person who spams instagram posts by Louis' friends with blue and green hearts. See urban dictionary, Archived version.

An anti-larrie's perspective on the blue/green theory:

If I decided today I would see signs and messages from certain celebrities based on very common colors or symbols, then I would invariably see messages confirming my theory was true. It’s an incredibly easy thing to do which should tell you how meaningless it is. I don’t understand how this blue/green concept was allowed to take off, it would only take a few seconds of thinking about how this applies to Louis/Harry (any couple so obsessed with each other’s eye colors that they’d be wearing them everywhere or sending them as signs to people would be incredibly unhealthy) or to the world at large in how blue/green could be applied to everyone and every celebrity for it to fall apart, yet it’s one of the mainstays of their fandom. It’s really bizarre to me.[24]

A widespread belief among larries is that Eleanor Calder, Louis' real-life girlfriend, is a beard hired by 1D's management. However, one Eleanor theory that gained some traction in 2012-2013, but wasn't adopted by most larries, was the idea that she was a set of twins or triplets who shared the responsibility of being seen in public with Louis. The twin was supposedly named Tina, based on a July 16, 2012, tweet by one of Eleanor's university friends in which they seemed to be addressing her as "Tina" (actually the name of their hamster). The third sister was called Gretchen (why?).

1D fans noticed right away and were referencing "Tina" in reply to Eleanor's twitter account as early as July 17, 2012.[25][26] It is not clear when exactly the theory that she was twins was developed, but there are several references to it in September and October 2012:

July 2012 also happens to be when the Twin Edits meme became popular on Tumblr, but there's no direct evidence the Eleanor twin theory was inspired by the meme. The Calder Twins tumblr tag goes back to July 2012, and while most of it is about the conspiracy theory, a few of the July 2012 posts are about 1D twin edits. 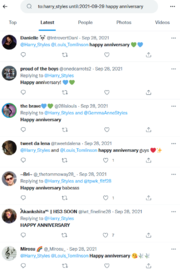 Fans wishing Harry and Louis happy anniversary on Twitter in 2021.

Larries believe that Harry and Louis got married on September 28, 2013. The media site Hollywood Life reported on fans' anniversary celebrations in 2015: Harry Styles & Louis Tomlinson Married? Fans Celebrate ‘Anniversary’ Of Rumored Nuptials, Archived version. A twitter search reveals that as of September 28, 2021, the tradition of wishing Harry and Louis a happy anniversary has continued ever since, although a casual scroll shows the most activity on the 2015 anniversary date.[30]

Hollywood Life explains the origin of speculation about the "Larry wedding" date was due to a September 29, 2013 tweet by Harry quoting a Joni Mitchell lyric: "We don't need no piece of paper from the city hall." Two other tweets seemed to confirm that a wedding took place: one a day earlier by Ed Sheeran about his best friend getting married[18] and Harry's mother, Anne, saying, "Good decision Louis." However, ohwaititwasharry notes that Ed and Anne's tweets were later debunked.