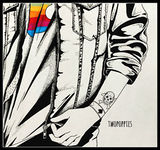 fanart by twopoppies (original, 2018) inspired by a photo of Louis wearing the Apple t-shirt.

The Bullshit 2.0 tweets of November 2014 marked a major event for larries, One Direction fans who believed the conspiracy theory that Harry Styles and Louis Tomlinson were in a romantic relationship in real life.

These tweets were interpreted in a radically different fashion by fans who believed in the conspiracy theory versus by fans who did not. (See Larry Is Real - LGBTQ+ Support and Bullshit 2.0.)

The tweets were posted on Louis Tomlinson's official twitter account and so were, and are still visible, to the entire fandom (and the media and the rest of the world).

The article featured a photograph of Louis Tomlinson wearing an Apple t-shirt with a vintage logo; Apple Computer Inc.'s logo from 1977 to 1999 was rainbow-colored. The photo was one of several taken on November 7 when Louis went to a rehearsal for The X Factor[1]; it appears that the photos were shared on social media the same day because fans were already excited about the rainbow design[2].

The headline mention of Harry Styles was in reference to a video interview published on November 3 in which band members were asked about what qualities they want in a girlfriend; Liam said "Female," and Harry replied, "Not that important".[3] One Direction fans were very excited by Harry's comment, and a google search turns up a lot of articles in the press mentioning it.

The next day, 10 November 2014, Louis sent the following tweets to the writer of the Independent article in what would become known as Bullshit 2.0:

@JennSelby The fact that you work for such a 'credible' paper and you would talk such rubbish is laughable. I am in fact straight., Archived version

@JennSelby Google 'original apple logo' and you will see the one printed on my shirt that you reported on. Trying to look for a promotion ?, Archived version

Fucking ridiculous I even have to tweet that shit !, Archived version

The following day, Jenn Selby, the author of the article replied,

"Thank you for your tweet. I'm sorry you found our article in any way insulting..." / "At no point did we insinuate anything about your sexuality or mention your relationship, and nor would we..." / "We were merely speculating as to whether you'd shown your support to a brave man facing some persecution..." / "For his decision to come out in public recently. I'd like to remind my readers..." / "That being called 'gay' should never be insulting & that standing up for #LGBT rights is an admirable thing to do..."[5]

There was immediate backlash from inside and outside the fandom for Louis's tweets. Many fans were angry because they believed that Louis's tweets were homophobic. The media then reported on fans' reactions.[citation needed]

To non-larries it seemed that Louis, a straight man, was objecting to being shown to support a gay man, and there was no good reason for him to object to that. Meanwhile, some larries thought this was evidence of internalized homophobia.

In protest, some fans encouraged others to unfollow Louis and One Direction on social media and cancel their pre-orders of their upcoming album.[6][7][8] For many larries, this protest was done as an attempt to send a message to Sony and 1DHQ, not necessarily to punish Louis himself, because they saw him as a victim of his management's homophobia. Some larries believed it was One Direction's management, not Louis, who wrote the tweet.[9][10]

Larries perceived the Bullshit 2.0 tweets to be an abrupt reversal of a previous trend that larries had been celebrating as One Direction's LGBTQ+ support. However, many argued that because his offline actions were supportive of LGBTQ+ fans, the homophobia in the tweets meant his twitter account wasn't really him; they believed Louis was doing his best to fight against an industry that had persecuted him for his sexuality. Louis had been the first band member to say he unreservedly welcomed LGBTQ+ fans.[citation needed] Many fans had been excited when he wore a rainbow t-shirt at the 30 April 2014 concert[11], and some even thought the t-shirt might be support for Rainbow Direction[12]. (Others argue it was simply a coincidence as the t-shirt was likely related to his Vans endorsement deal.) In addition, some queer fans have reported that his interactions with them have indicated not just acceptance of but also in-depth understanding of the LGBTQ+ community. This seemed to be supported by his actions as a judge on The X Factor in 2018.[citation needed] Also see this 2017 post from a larrie's point of view on fandom perception of Louis as homophobic vs. larrie perception of Louis as supportive: "I'm new to the fandom, and I saw that article about Louis from the LGBT website...", Archived version

However, the interpretation of the tweets as homophobic was not universal.

Anti-larries and other non-larries have argued that people were misreading the tweets and ignoring the history of celebrity gossip magazines speculating about Louis's sexuality. Louis's tweets suggest he thought that the article was insinuating that he and Harry Styles were in a relationship, and many fans thought this was indeed the subtext of the article.

Louis was also known to be aware of fans' belief that he and Harry were in a relationship, and he and his family and girlfriend were frequently harassed about it on social media. Some non-larries thought he may have been frustrated that The Independent was perpetuating the conspiracy theory.[13]

Fans pointing to either Larry-related harassment or celebrity gossip said that this history justified him snapping. Others thought he was still being a dick about it.