Louis Tomlinson (born 24 Dec 1991) is an English singer and oldest member of the boy band One Direction. He also likes football. See Wikipedia for details.

On January 23, 2016, Louis announced on Twitter that his son had been born.[1] A fan created a fake article announcing that the baby's name was Conchobar and it unexpectedly turned into a giant meme.[2] Meanwhile, larries thought that the baby was fake, a theory called babygate.

Louis appears in a lot of fanworks.

In Radio 1 RPF, he is shipped fairly often with Radio 1 DJs Nick Grimshaw (Tomlinshaw) and more rarely with Greg James (Grouis). As of December 5, 2021, there are 1162 Nick/Louis fanworks and 70 Greg/Louis fanworks on AO3.

A popular fan activity in 1D fandom is for fans to write self-insert fics shipping themselves with a 1D band member. On AO3, which skews more toward m/m than other archives, there are 425 Louis/Original Female Character fanworks.

Finally, some number of fans have shipped him with his real-life girlfriend Eleanor Calder. The ship is known as Elounor. After Louis went public with the relationship, Elounor shippers (and other supporters who may not have actively shipped them) engaged in a ship war with Larry Stylinson shippers who believed that Harry and Louis were in a romantic relationship in real life. Larries believe that the Louis/Eleanor relationship is fake, and have repeatedly tried to prove it. Sometimes they do this with various nonsensical theories, the best known and most-often made fun of being that Eleanor was actually twins or even triplets[4] 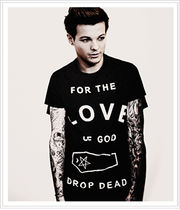 Punk!Louis was a popular Tumblr meme that produced fanart and fanfic. Louis even tweeted about them in support[5].

Another Tumblr meme features Louis as Peter Pan. See the AO3 tag and the Tumblr tags louis pan, peter pan louis, and peter panlinson. The meme was around as early as September 8, 2012[6], but this popular artwork by jaesama[7] was posted on July 13.

He is often very romantic and gentle, very sweet and loving to a best friend, a new love or an extremely smutty guy. For example:

He is often depicted as the leader of the group, the prankster, the one others will follow in whatever harebrained schemes he devises. For example:

He is generally good with children, taking care of his many canon siblings, or in kidfic with his own or someone else's child. For example:

In AUs he is often written as a footballer, following his canon love of and involvement in the sport. For example:

Louis is often "the sassy one", as he is very quick-witted and isn't afraid to give anyone cheek. For example:

The same quick wit might result in him being written as slightly mean and cruel, especially in angsty Larry or Tomlinshaw stories. For example:

Relatedly, he is often written as insecure and/or troubled, sometimes because of being closeted, internalized homophobia or other issues. For example:

The fannish interest in Louis admittedly having the best ass in One Direction means that where penetrative sex is involed, he is often characterized as a bottom, either enthusiastically or despite himself; in A/B/O stories he is much more likely to be an Omega.[8] For example: