Tomlinshaw is a crossover RPF slash pairing between BBC Radio 1 DJ Nick Grimshaw and One Direction singer Louis Tomlinson. Within 1D fandom, it is a rarepair, with less than 2% of 1D fanworks on the Archive of Our Own, though it represents a larger piece of the Radio 1 RPF pie.[1] Tomlinshaw is sometimes described as a crack ship, as the canon basis is limited (confirmed Louis/Nick interactions are relatively few) and even its shippers don't treat it as very plausible (compared to other 1D ships, which tend to attract tinhats). For a comprehensive and updated primer (last updated 2018), check out Tomlinshaw: A Ship Primer by Writcraft.

Basically, Nick and Louis fulfil a hate/love trope that really can’t be filled by any other pairings, since the rest of 1D is a puppy pile that fell in love with each other and became best friends/brothers/fated soulmates, and now I’m crying. It’s pretty clear how their personalities could clash – they’re both upfront, they’re both opinionated, and their senses of humour both lend themselves to anything from light-hearted banter to straight-up shade. There’s room there to get along well, and there’s also room to piss each other off till they’re at each other’s throats.[2]

Fandom appears to have invented Tomlinshaw around September 2012; the earliest AO3 fic was posted September 13[3], and the earliest post in the tomlinshaw tag was on September 15[4], but the tag didn't get busy until September 24, Nick's first day on the Breakfast Show.

Nick and Louis had a rather infamous spat in late 2013. Highlights of the drama include Nick calling Louis a "complainy popstar" on air, Louis insulting Nick on twitter, Nick retaliating and offended 1D fans sending a barrage of "charming homophobic death threats" Nick's way. The two seem to have made up since, being perfectly civil during a Radio 1 interview in 2015. The two shared a hug backstage at the X Factor in late 2016.

There was a resurgence of interest in Tomlinshaw in 2017, following Louis's appearance on the Radio 1 Breakfast Show.

According to early fanon (the validity of which has been disputed in meta discussions)[5] Nick and Louis supposedly hated one another; as a result, fic written about them features a lot of enemies to lovers and hatesex.

Many Tomlinshaw fanworks could be categorized as crackfic, but even if they are not crack, they are often humorous, playing off of Louis' and Nick's sarcasm and sharp wits.

Because there are so few canon interactions between them, many fics are AUs or futurefics, or in canon-compliant fics, their lack of interaction is explained by keeping their relationship a secret, sometimes even from the rest of 1D. These fics can feature closeting/coming-out angst or drama.

Harry Styles is often featured heavily in Tomlinshaw fics, sometimes as a catalyst for the two to meet, as he is good irl friends with both Louis and Nick.

At one time it was popular in some Tumblr circles for users to tag a variety of posts with "tomlinshaw" not because they actually are about the ship, but because they are antagonistic or ridiculous posts embodying the spirit of the ship. In 2014 fans used some of the tagged posts as prompts for the /tagged/tomlinshaw ficathon. See the prompts page, challenge info page, and AO3 collection. 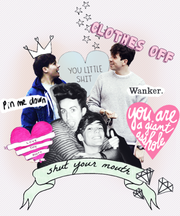 a fanart example of the (cracky) love/hate Tomlinshaw trope

Other Blogs and Communities