Niall Horan is the Irish member of the English/Irish boy band One Direction. He also plays guitar. See Wikipedia for details.

In fanfiction, Niall is most often shipped with fellow band members Zayn Malik (Ziall) or Harry Styles (Narry), though he is also shipped with Liam Payne (Niam) and sometimes Louis Tomlinson (Nouis). However, Niall is the least likely to be slashed of all the band, especially in early 1D fandom, when a lot of fic featured Harry/Louis and/or Zayn/Liam with Niall as the fifth wheel.[1][2] A lot of Ziam/Larry fanworks even portrayed Niall as "ship captain".[3] The lack of Niall ships may have been partially due to Niall's youthful appearance; many fans commented that he looked the youngest of the band, and some have noted that he is less popular with older fans[4]. Also relevant is that he had crooked teeth during the X Factor and subsequently wore braces until early 2013.

Outside of 1D, Niall is sometimes shipped with fellow Irish musician Niall "Bressie" Breslin (Nessie). This is considered a rarepair, with 134 fanworks on the AO3. Niall is even more rarely paired with Radio 1 DJ Nick Grimshaw, with 24 fics on the AO3. This ship is sometimes called Horchata.[5] 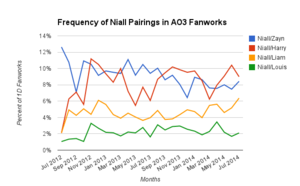 In RPF fanfiction, Niall is generally characterized as easy-going, upbeat, and fond of eating. An FFA anon described early fanon about Niall thusly:

He seems the one that's skewed at the younger fans and is painted in fic as being overly twee and cute and innocent. He's also portrayed in lazy fic as very one dimensional, not normally paired up with anyone, normally eating, being stereo typically Irish (writing phonetic accents is a pet peeve of mine so this is particularly aggravating) and generally a bit gross which is annoying. Niall in my opinion is very cute, yes, but he also keeps a lot about himself in order to keep irl things private, which I think is very interesting about him.[6]

Niall slash fans still have some feelings about this fanon:

Even when I’m not reading a fic for Niall I still get SO MAD when he’s the ONE straight one or has flat boring characteristics - LOL HE LIKES FOOD AND PINTS when Niall actually gives us PLENTY of his character that I feel people wilfully ignore through laziness. He’s carefree without being careless, he’s thoughtful, he’s laidback without being lazy, he’s talented with accents, languages and music, he’s easily overwhelmed by large crowds or lots of stress, he’s very neat and clean - like OF ALL THE SHIT HE FREELY GIVES US, PEOPLE TAKE ‘PIZZA AND PINTS AND IRISH LOL’[7]