Stories and art containing Vampires may be created in fandoms in which the existence of vampires is canon or for source materials lacking vampires or supernatural elements in general (e.g. The Sentinel, Starsky and Hutch).

In source materials with canon vampires, fandom often develops or expands on societal structures and norms within vampire society. Buffyverse fanwriters developed detailed headcanons around Sire/Childe relationships and vampire mating rituals; two tropes with little or no basis in canon. However stories involving vampires are often influenced by other source materials with canon vampires. Buffyverse fanwriters are believed to have been influenced by Vampire: The Masquerade role-playing game, which was itself influenced by Anne Rices' The Vampire Chronicles.[1]

In fandoms where vampires are minor characters, or where vampires exist but only as antagonists, fanwriters may use original characters to examine vampiric relationships and culture in that canon. Alternatively a character may be bitten and turn into a vampire. Vampire AU stories also appear.

Below are some fandoms with vampire-centric canons. See also List of Vampire Fandoms for more fandoms:

While the existence of vampires is canon in some cases such as Supernatural and Harry Potter[2], the vampires play a very minor role and might only be mentioned in passing. This often results in a lack of canon-specific vampire lore that is filled by fanfic. Sometimes, fan authors develop an entire original society and culture for the vampires in their stories.

Include info on the types of tropes/storylines used in vampire fanworks, fandom specific examples, discussion around vampire fics/art etc. 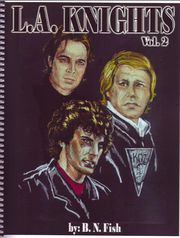