It is a sister zine to The Good Guy Vampire Letterzine.

This zine was inspired by the pro novels of Chelsea Quinn Yarbro, and another pro writer, P.N. Elrod contributed a story that crossed one of Elrod's characters with Quantum Leap to the first issue. In between the publication of the first issue of this zine series, however, both of these pro authors brought the hammer down on fan writing, an action they took in September 1992, along with Marion Zimmer Bradley, Mercedes Lackey, and Anne McCaffrey. See Holes in My Yard (Zimmer Bradley, September 1992), Open Letter to FYI from Author P.N. Elrod (Elrod, September 1992), and A Matter Of Willful Copyright Infringement (Quinn Yarbro, Summer and Fall 1992), and a wrap-up: The Marion Zimmer Bradley Fanfiction Controversy.

Good Guys Wear Fangs was a short-lived annual vampire fanzine dedicated to what founder/editor Mary Ann B. McKinnon termed good guy vampires. In the mid-1970s, McKinnon, never a horror fan, discovered the novels of Chelsea Quinn Yarbro, whose vampire character, St. Germain, was a romantic hero. McKinnon considered Yarbro an isolated author and enjoyed most of her novels as they continued to appear through the 1980s. It was not until 1989, when she saw the made-for-television movie Nick Knight, and later the two To Die For movies, that McKinnon developed some hope that other good guy vampire fiction exists. She decided to announce the development of a fanzine based on the theme of the vampire as a hero. The response to her announcement showed the vast interest and supporting material for her approach to vampirism.

The first copy of the 300-page Good Guys Wear Fangs appeared in 1992. It featured original short stories and poetry in which the vampire was the hero. By this time, Forever Knight, the television series that grew out of the Nick Knight television movie, was airing on CBS late-night television. The Nick Knight character was featured in Good Guys Wear Fangs. In 1993, McKinnon added a related periodical, The Good Guy Vampire Letterzine a newsletter for good guy vampire fans. The Letterzine kept fans aware of newly discovered good guy vampire fiction and movies, and carried an ongoing discussion on the nature of good guy vampirism.

McKinnon has encouraged not only completely original fiction but new stories that feature popular characters from television and the movies. By far the most popular character who appeared in Good Guys Wear Fangs was Nick Knight, but other stories have featured Starsky & Hutch, Columbo, and Dark Shadows.[1]

Some June 1992 comments by P.N. Elrod, three months before she disallowed fanworks in her own universe, and disavowed her own previously written fanworks:

Speaking of Jack Fleming and QUANTUM LEAP, I was asked to trib to a zine called GOOD GUYS WEAR FANGS. I'd been thinking of doing a QL-Jack Fleming crossover, but the idea of Sam leaping into Jack just wouldn't spark. Then, I wondered what would happen if he leaped into Jack's human partner, Escott. 24 hours and 7000 words later (my usual speed is 1000 words a day), I had the start of a promising story. It ended being a novella, and will appear in issue one.

With fanfic, you can jump into things without the bother of setting everything up for the reader. I also find it to be more of a challenge to write because all the other fans have their version of a media character and maybe a writer doesn't live up to that view. Because of that, fanfic can be more gratifying than the pro stuff when someone tells me I got it right!

Some pros have wondered why I spend any time on the zines, but anything to do with writing teaches me. If I hadn't put so much work into the zines, my second novel would have been a bomb. I had grown as a writer because of the zine work. This QL zine I mentioned above is a good example as it gave me a chance to practice a third person point of view. Most of my work is done in first person, and I wanted, and enjoyed the stretch.[2] 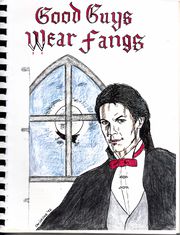 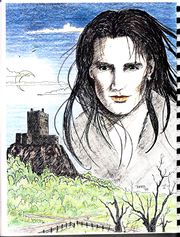 back cover of issue #1, Barb Johnson 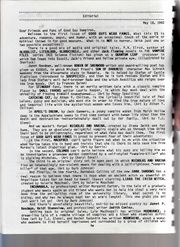 page one of the editorial, contains story descriptions, click to read 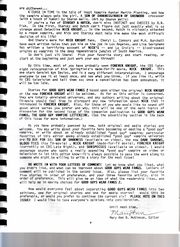 Good Guys Wear Fangs is a collection of stories, poetry, and artwork about literary, media and original vampires... but they're the "good" guys. Bauhaus is right, Bela Lugosi is dead [3]..the popular bloodsuckers are a kinder, gentler breed of vampire. There are a few of the old breed "evil" vampires around to give their " brothers of light" a cross to bear, but they're only window dressing. What ever happened to the wonderful state of moral ambiguity (and I'm not talking that solipsistic angst that passes for emotion in the Anne Rice vampire novels), the theory that absolute power will corrupt absolutely, or even the time-treasured whiff of brimstone and the fetid smell of post-mortem halitosis?... None of these stories should have appeared like this— they could have been repaired by their authors with a little more attention to vocalization, description, character vocabulary, or even by having a fan of the series (who wasn't particularly interested in vampires but who knew the show) take a good. Kind look at the stories. Are these good MacGyver, or Starsky and Hutch, or Columbo stories? Nyet! Nyet! Nyet! One could make the argument that these stories aren't MacGyver, or Starsky and Hutch, or Columbo stories-they're vampire stories. And that's a rational opinion. So then why use those characters in the first place? Why not use original characters?... The actual layout of the zine is generally uninspired, with small and poorly reproduced clip-art in odd spaces. The margins are fine, the spiral binding is sturdy, and the type is legible...but one would think that SOMETHING could be done regarding the presentation of the poetry... And then there are eighteen pages of advertisements at the end! If I want to pay money for eighteen pages of ads, I'll buy an adzine. $22.00 is not a bad price (postage include in your collection. But knowing what I know now, I think I'll take a second or even a third look at the fiction in the next issue before plunking down my blood money.[4]

It's good. However, except for the two entries by professional writers, most of the stories suffer from the same problem found in so much fanzine fiction -- flawed conflict and suspense. Don't laugh -- conflict and suspense are very hard skills to master, and doing them both at the same time is much harder than walking and chewing gum. Unfortunately, the vampire form requires both suspense and conflict cranked up to the highest pitch, and many of these stories fail for the lack of it. However, there is relish and delight in introducing favorite media characters such as Columbo and Starsky and Hutch to a "real" vampire. GOOD GUYS WEAR FANGS is a very tame pg-13 rated 'zine.[5] 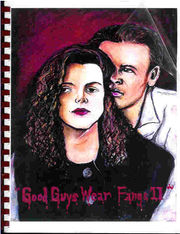 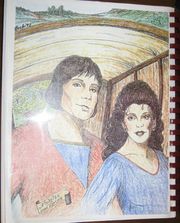 back cover of issue #2, Nicholas and Varina by Barb Johnson 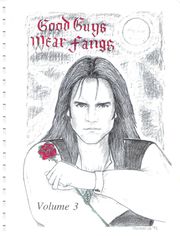 front cover of issue #3, Michael Praed as Max Schreck in "To Die for 2: Son of Darkness" by Christine Haire 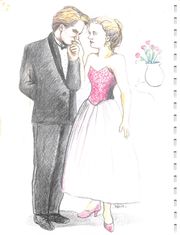 back cover of issue #3, Michele West, "Nick and Natalie of "Forever Knight" caught in a winsome moment"

Good Guys Wear Fangs 3 was published in November 1996 and is 373 pages long. The interior art is by Michele West, JJ Jones, and Denyse M. Bridger. 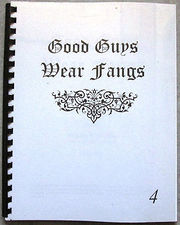