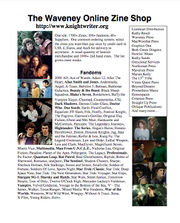 KnightWriter Press (also known as the "Waveney Zine Shop") was one of the largest fanzine agents.

The site was first run by Linda Knights, then Judith and Richard Proctor.[1]

The website was created and managed by Richard Proctor.[2]

"The Waveney online Zine shop allows you to sellect from more than 600 zines in over 50 fandoms. Pay once using your credit card, regardless of the number of suppliers involved. The shop operates in five different currencies. The shop is open to all fandoms, selling zines (and some CDs and tapes of interest to fans) from many different suppliers and publishers in one place. The listed zines change most weeks.

This shop is run by Waveney (Judith and Richard Proctor). The same zines are for sale here as on our main Blake's 7 site at the same prices. The differences are in presentation, - Hermit is very Blake's 7 and just lists the zine's titles for non Blake's 7 zines." [3]

In January 1009, the site announced it would be closing in about a year. In September 2010, the press announced they would be getting out of fanzine distribution.

The front page of the website posted how many items were available, as well as how many suppliers provided these items.

At some point in early 2009, there was a huge drop in inventory.

This is a notice aimed at zine publishers, though customers are welcome to read it as it shows how things operate.

Hi, I am the webmaster for Linda Knights (knightwriter.org). She and her sister have had a very nasty acident, and are not currently in a position to handle zine orders. She will get round to the orders she has, but as it might be some time, we have at her request taken over all online ordering for the time being.

To make life as simple as possible, we want to operate on the "virtual shop" principle; we will collect orders, handle payments by credit card, but only actually post our own zines. When we get an order in, we will email you with the details of the customer and what they have ordered, you post the zine(s) and reply back to us, then once every few months we will pay you in pounds or dollars.

We operate with a simple commision of 10% (of which nearly half goes to the credit card company). Thus we either need to know what you want us to charge (of which we will keep 10%), or tell us your figure, on to which we will add 10%. For each zine, it is necessary to identify the cost to send it to all the parts of the globe, this can be broken down in ways to suit you eg US and Rest of World, or US, Canada, Europe, Pacfic, or UK, Europe, Rest of World - Basically, the system is very flexible. If the zine has restricted circulation (eg North America only) then inform me what it is. We will not operate complex discounts or special offers - these often cause problems and confusion.

The shop can, and does, handle cases where the same zine is available from multiple suppliers eg a US and a UK pubisher. In this case the online shop always chooses the cheapest supplier for where the customer is.

If and when you have new zines, send me the details and I will add it to the site. I can very easily add new fandoms, if necessary.

Why are we doing this? Well, Judith my wife, publishes Blake's 7 zines, and through our large web site at hermit.org sells many of hers and other people's B7 zines. Linda and Judith have been working togther for several years and we don't want to let Linda's customers down. I (Richard) have been running Linda's website for 3 years, and I can easily adapt it to a new mode of operation.

We realise it is much easier for fans to do all their zine shopping from one centralised site, without having to deal with each editor individually. This is a fan activity, the 10% is designed to cover real costs and if we make money out of the business we will donate it to charity.

So in this model what do: Customers, Publishers/Suppliers and we (Waveney) do?

Customers - look through the web site and select those zines they want and pay once, independant of the number of suppliers the zines come from.

Publishers/Suppliers - You write and publish zines, print zines and post them to the customers we indicate, you don't have to worry about the web or payment systems. You can have your own websites in addition to having zines listed on this one, and we are perfectly happy to link to them.

Waveney (Richard and Judith Proctor) - we maintain the website(s), handle the credit cards in conjunction with WorldPay (ie a secure site where your card number can not be discovered by other people - WorldPay ensure we don't even see the card number ourselves, unless the non-secure server is used). We forward orders to the suppliers, handle customer queries including refunds for missing zines, and pay the suppliers.

I hope that makes things clear, if you have any further queries or questions please let me know. -- Richard Proctor [5]

Our online fanzine shop is slowly expanding - it currently has over 1500 zines in 90+ fandoms. Would you like to sell your zines through our shop?

We do not print and we do not carry stock (other than for our own zines) - you retain the masters of all your zines and you avoid the cost of mailing stock to us. Obviously, our service is only of use to people who print and mail zines themselves.

We collect the orders (usually paid by credit card) and forward them to the publishers by e-mail. We keep track of the order's progress and are the first point of inquiry for customer problems. We pay accounts in full once a month by £ cheque, $ check or by PayPal. If illness or other problems cause late payments then we usually pay part of the next month in advance. If you do a large amount of business with us then a degree of pre-payment is normal. We've been agenting zines for over 8 years now.

If any supplier would like some (or all) of their money as a gift certificate to spend in the shop, we will give an extra 5%, to reflect the reduced costs this is to us.

Although we worked closely with Linda Knights on her web site and we sold each other's zines, we had no formal business connection with her (we're on the other side of the Atlantic). When Linda's accident caused her financial collapse, everyone owed money by Waveney got paid in full, In fact we lost more money then anyone else, as we paid everyone we agented for directly, even when the zines had been sold via Linda and she was unable to reimburse us for those zines. Our business accounts are entirely separate from our personal accounts and always have been.

The shop operates worldwide in several currencies on a simple margin of 10%, which helps cover payments to credit card companies and the costs of maintaining the websites.

Knightwriter is also known for receiving a cease and desist notice that led to it temporarily ceasing publication of Rat Patrol fanzines.

Sometime in the mid to late 90's, a popular RP writer, editor, and zine publisher received a very stern cease-and-desist order (C&D) from MGM/UA, who were under the impression that she was publishing actual books based on Rat Patrol. When she spoke with them on the phone, they apologized and said that if they had realized that she was just putting out zines, she would have gotten the milder letter they occasionally send to fans. They said that they were forced to send her a letter to protect their copyright because they had received a letter from someone on the email listserv that gave the impression that the zine publisher was a professional publisher. They described the letter as "surprisingly hate-filled." No one ever found out who the listserv member was who sent the letter to the copyright holders...[7] 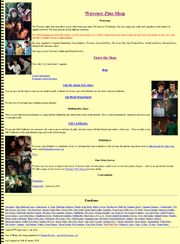 screencap of the website's front page, click to read

KnightWriter Press went on to make the following announcement: "(Special note—On any of these fanzines containing Rat Patrol material the Rat Patrol stories will have to be 'removed' from the fanzine. If this constitutes more than 2-3 pgs you will be credited for the difference. Sorry—this action is caused by the legal order by MGM/UA)."[8] After some back and forth negotiations with MGM/UA, Knightwriter was allowed to continue publishing Rat Patrol fanzines without using any images from the series.[9]