From Fanlore
(Redirected from Lionheart Distribution)
Jump to: navigation, search

You may be looking for the Beauty and the Beast zine, Lionheart.

LionHeart Distribution was a fanzine agent/distributor. It was formed in 2001 to help other fanzine publishers sell their fanzines on the web as well as at conventions. LionHeart is also the distribution arm of Secret Pleasures Press which then became Devious Developments Press in 2003[1] when it merged with Angel Wings Press. 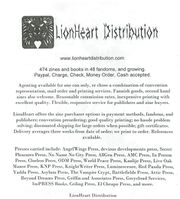 a flyer printed in the 2003 ZebraCon program book

In 2005, LionHeart took a break from selling fanzines in response to two C&D notices it received.

Following the receipt of a C&D letter, Lionheart Distribution have pulled their UNCLE zines from sale - bad news for slash fans since they'd not only been publishing new zines but also helping fans get hold of copies of zines in the classic series 'We Have Each Other' and 'Classified Affairs'. ....The fact that only LHD has received a C&D means that someone either turned them in, Warner found them online (which isn't a feat), or something produced or distributed by LHD fell into the wrong hands. There's no telling which property Warner was really out to protect when they sent LHD the C&D, as it was a blanket C&D for Warner properties, not a MFU-specific C&D. [2]

Unfortunately, [some MUNCLE fanzines] aren't being distributed any more because Warner Bros has sent out Cease and Desist letters to LionHeart Distribution."[3]

Among fannish circles, LionHeart is occasionally referred to as "Lionheart Press" which, according to the distributor is a misnomer as they do not publish, only distribute fanzines.