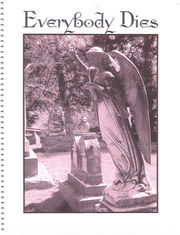 Everybody Dies is a 158-page multifandom anthology published in 2003. It contains gen, slash and a small amount of het.

A MULTIFANDOM COLLECTION OF STORIES IN WHICH SOMEBODY BUYS THE FARM, IS LOST FOREVER, IS KILLED, KICKS THE BUCKET, GETS THEIR JUST REWARDS, GOES HOME, PASSES AWAY, DIES. SOME SLASH, SOME GEN, SOME HEARTBREAKING, SOME NOT.

Summary from a distributor, LionHeart/Requiem: "Some funny, some not, stories about a character's death."

Summary from a former distributor, Agent With Style: "If there's one universal truth, Immortals and vampires notwithstanding, it's that everyone eventually dies. In this zine that contains both gen and slash stories, you'll find tales where a character dies a silly death, or a heartbreaking one, or he or she dies a death that had long been coming to them. If you've ever wanted to kill off a character you couldn't stand, or see how one of a loving pair would handle the death of the other, look no further. From *The Sentinel* to *The Professionals* to *Kung Fu: The Legend Continues* to *Due South*, and many more, each and every tale contained within shows a cessation of a beloved (or not so beloved) character. Want to laugh? Want to cry? In a mood to murder someone? Then this zine is for you!"

Summary from an unknown source: "Sometimes death is poignant, sometimes justified, but always, it changes something. Some of these stories will make you laugh, and some will make you cry, or simply sigh. Beyond the death in story you'll find something else, that life goes on."

Ok, here it is Christmas, season of light, peace, yadda yadda.... and you're watching reruns of your favorite shows, (especially if you've got TV Land), and there he/she/they are..... characters who annoy you soooo much, you wish they'd get run over in the next car chase, shoved out a portal, keel hauled. Now's your chance. 'Everybody Dies' is just that, a zine where one, or more, depending on how rotten your day at work was, major character dies. Yes, Megan, Cassie and Naomi on Sentinel are major characters. Yes, Deanna Troi is a major character. The new Vulcan on Enterprise. The short 'king' on Farscape...Scorpious on Farscape (somebody, please)...... No show is safe, no character too important to take right off the opening credits. So, do the catharsis thing. You can't do it in real life (they won't send bound zines to jails...... and probably not slash, either) but on paper, anything goes. Pen names ABSOLUTELY ALLOWED. I do NOT leak pen names, no matter what. Word Perfect, Word, text files accepted. Gen or Slash, any fandom, pretty much any length. Cartoons welcome. And if you've got a great angsty story, (even if it's serious and will make the reader curse you for making them cry), we'd like to see that too. Sometimes, a writer just wants to write a story and see how their favorite character would deal with the death of a loved one, but then the story languishes in a drawer cause no one will publish it. Well gang, Secret Pleasures Press wants you dust them off and send them along. Please pass this post along to any and all lists where some Mad Magazine or Addams Family sort of writer/fan may lurk. [1]

From the Zine's Editorial

How a luncheon conversation inspired a zine.

Well. First, one must be careful who one eats lunch with. When it's three other authors and two publishers in three people, and you, yourself are a writer/publisher/editor with a twisted sense of humor and no fear about publishing stories for the off-beat and eclectic taste, well, things happen.

So there we were, Bast of Angel Wings, Beth of Allgen, Chris the writer, and me, of Secret Pleasures Press, Politely ImpeRfect Press and a few other odds and ends of publishing.

And we were talking about warnings on zines, and how they came to be so prevalent and how some of us like or don't like them. And Chrys says, "Well, everybody dies."

And here's the proof. In a book.

To Chrys, a very nice lady, and my pals Beth and Bast, who make me laugh, and the fine authors and artists who contributed to this silliness and seriousness, many many thanks. You've all been patient, kind, generous, and I am very happy with the final result.

Regarding "Just Another Tragic Mistake"

This story crosses The Sentinel with a fan-created original slash and other pairing series called In the Blood.

FROM THE AUTHOR: LET'S MAKE ONE THING PERFECTLY CLEAR: I ADORE GENNADI ANTONOV. EVEN BEFORE I WAS PESTERING JOYCE REPEATEDLY FOR ANOTHER INSTALLMENT, BEFORE I HAD BECOME COMPLETELY SUCKED INTO THE WORLD OF ITB, I LOVED NADI. HIS CHARACTER IS DEEP, MANY-LAYERED, FUN TO READ, AND AS I'VE FOUND, GREAT FUN TO PLAY WITH. BUT I'M EVER SO GLAD THAT THIS IS AN AU, AND THAT NADI IS DOING QUITE WELL IN THE "REAL" ITB UNIVERSE.

I AM INCREDIBLY GRATEFUL TO JOYCE FOR ALLOWING ME TO USE HIS CHARACTER IN THIS STORY, EVEN IF I DID AMBUSH HER WITH THE IDEA. HEY, YOU TELL ME I CAN KILL OFF "ANYONE I WANT" AND I JUST MIGHT TAKE YOU UP ON THAT! IF YOU WANT TO READ MORE OF NADI, AND I HIGHLY RECOMMEND THAT YOU DO, GET THE ITB BOOKS - ALL OF THEM. THEY'RE LIKE PRINGLES, YOU CAN'T HAVE JUST ONE.

AND ON THAT NOTE - JOYCE? WHEN'S THE NEXT ONE COMING OUT?

EDITOR'S RESPONSE: YES, I WAS AMBUSHED, AND WAS HAPPY WITH THIS RESULT. A NEW "iTB" IS ALWAYS IN THE WORKS.