Drawerfic is fan fiction that is never shown to other fans, or that is only shown to a few friends (and then it may be also called a "pass-around" or "underground story").

Drawerfic is rarely later posted online or published in a zine.

The term refers to the idea of "keeping stories in your desk drawer." 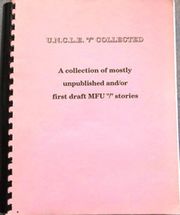 a zine of Man from U.N.C.L.E. drawerfic by Denetia Arellanes, collected and printed in this 1998 zine, most likely meant for use only by the author, or for a very small group of friends

Sometime in the 2000s, a zine ed asked for submissions and mentioned the hidden stash she figured many fans had: "Here’s your chance. I know nearly all of you have a story hiding somewhere at the back of your desk drawer, in your computer files, under your bed... that you’ve only shown your closest friends."[1]

It is usually understood that drawerfic was written primarily because it appealed to the author; the author themself recognizes that its audience is narrow, and the quality may not be high. Some drawerfic, however, is written by highly accomplished authors and isn't publicly published for other reasons.

Not drawerfic but related, are fanworks by fans who wrote underground fic under pseuds, feeling that the content was something they did not want connected to their fannish or real names.

Why So Much K/S Drawerfic?

In a 2004 interview, Fern Marder, talked of the drawerfic she'd written with Carol Walske:

Obviously, I am very excited about 'A Distant Shore', the novel that we finished the draft of last summer. We actually have written a number of novel-length manuscripts, but this one really feels right. I'm afraid that a lot of our best work was only ever shared with close friends and family. In the universe we called 'Luminous Times', the first novel, 'A Sort of Homecoming', will always be one of my favorite works.[2]

Shelf paper, or dresser drawer lit or closet fiction, is that stuff written purely for its thrill, shared with your best friend, and then hidden under a stack of zines.[3]

In 1981, another fan looks back on very early Star Trek: TOS drawerfic, as well as Harry/Johnny (from Dirty Harry) fiction.

In 1984, a fan explained that true drawerfic was only for yourself:

Epics That Must Not Be Read (Term borrowed from the only other person I know for sure has written one of these. She will not be named here - unless she just wants to be - out of mercy for her.) Another thing I do is write these long, involved pieces of FF that are only for an audience of one, and that one person is me. They're always AUs of some kind, and they always start in canon and move sharply away from it, and they always entertain the hell out of me. But only me.[6]

The Prevalence of the Private

In 1981, a fan speculated on the maturing nature of Starsky/Hutch fiction. In 1981, the only slash zine that had been published was Forever Autumn, yet it was clear that many fans had already read a lot in this genre:

Romps in the sack are nifty, but as we seem to agree, they become tedious when they remain the focus of a genre. In S/H writing, though, I see a shift away from the graphic aspects of their sexuality.... more and more I’m seeing S/H stories without graphic sex. The emphasis seems to be fast becoming a serious effort to document a love-relationship, and not just an exercise in how many clinches can be fit into a ten-page story. Instead of closing off fan fiction, S/H seems to be opening up a lot of new areas of exploration. [7]

The Black Notebook, by the way, is the big black three-ring binder, or expandable manila folder, or large cardboard box, in which are kept the early drafts, critique galleys, or complimentary copies of a fan's own or someone else's unpublished stories. The Black Notebook is an artifact of the second period of the fan literature, late 1980 to 1982, the hush-hush period. Not til The Professionals emerged was there a fandom with as many unpublished or downright subterranean stories about. There were secret series, secret round-robins, even a secret letterzine [8] for a while in 1981. Most of this underground stuff was S/H, and the reason that it was so encrypted was the fear and occasional paranoia that Spelling-Goldberg would sue the writers. Hence "The Zine With No Name"; CODE 7 1. There are no editors, no artists, no writers credited in this 1981 publication. Other stories remained buried because their authors gafiated before they were finished. From time to time some incanabula surface, but sadly, most may molder away, in obscurity, forever. [9]