The Brass Bed is a very, very early slash pass-around Starsky and Hutch novel by Billie Fowler. It has been called by some one of the “Holy Grails of Starsky & Hutch fandom.” [1] The brass bed in this fandom refers to Hutch's bed frame in canon. 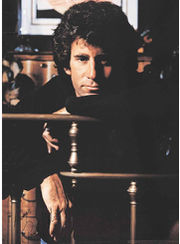 Brass bed frames were a common decorating element in the United States in the 1970s. [2]

The brass bed was a prominent background fixture in Starsky & Hutch. Hutch's brass bed sat in his bedroom/living room in his canal-side cottage.

History of the Story and Other Fanworks It Inspired

Paula Smith, the author of the controversial story Surrender in the zine Strokes, notes that special acknowledgments go to The Brass Bed as it was her story's inspiration:

Something slightly unusual about S&H lit is the relative commonness of prequels, sequels, and remakes or "missing scenes" for other S&H stories and the original episodes. Possibly this is because there are fewer stories to be told about two men in one city than about, say, a shipful of folks in a galaxy. The best known example of a story and its spinoffs may be "The Brass Bed" by Billie Fowler, which inspired both Donna McIntosh's "I Read It in the National Enquirer" (unpublished) and my own "Surrender" which in turn inspired Eileen Roy's "Fountain of Sorrow" and Cath A. Rine's "Right Between the Eyes"; three other unpublished stories on the same theme are "The Bound Blintz", "Revenge of the Bound Blintz" and "Bound Blintz: The Motion Picture", by an anonymous author. [3]

Rumor has it that Leslie Fish was planning to write a sequel to "The Brass Bed," but this fic was never completed.

1985: From a fan who'd written Right Between the Eyes, a responsefic to "The Brass Bed":

Like many another S/H reader/writer I had heard of the Brass Bed story. As is usual with me, when I sat down to write my own version, the story took a different turn than I had consciously projected. I ended up trying to figure out more of the motives behind such a story and how the feelings involved would really be handled. I didn't really start out to find evidence to substantiate my view, but my subconscious has a very logical way of going about things and insists that there be a reason for everything a character does, even if I don't know it (or agree with it if I do.)

It threw in the latest on why battered wives often won't bring charges against their husbands and what such women get out of such a relationship and just what all those jokes Starsky and Hutch are always playing on each other meant and how the jokes they played differed.

So you can see this as a story to back up my claims, or you can just enjoy it as a different way of looking at a relationship that has been discussed at some length. In any event it's what came out when I sat down and typed.

Billie's stories were not zine-published, just passed around by hand, like Pros circuit stories. I'll make you a copy of mine if you like, but I think you'll find it doesn't live up to its legend. [4]