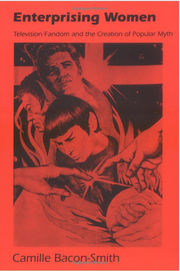 Camille Bacon-Smith is an aca-fan who has written about fandom. Her book Enterprising Women: Television Fandom and the Creation of Popular Myth is often cited in other works. Bacon-Smith, and Henry Jenkins's book Textual Poachers, were both published in 1992 and signaled the beginning of the study of popular fannish culture and media fandom.

Materials related/mentioned/used in this book, fan-created and otherwise, are archived at the Temple University's Enterprising Women Collection.

From FanWorks.org: "In a private e-mail dated March 25, 2001, Camille Bacon-Smith said she did not tolerate fan [fiction] derived from her original work." [1][2]

From a 1992 panel at Gaylaxicon in which Bacon-Smith was a member of:

Camille: Well, I suppose that it's time to 'fess up. All the while that I was doing my book, I was an academic, and that's all I did. And I would actually write stories, and I would go around from group to group, and get them to finish the stories for me, and tell me what to write, so that I'd know what was going on, and what the process was. But when I finished the book and put it all away, I discovered there was this one little set of stories that I couldn't put away. And so somehow I had gone native in this one little tiny section, and the problem is... It's not the big section like, you know, Star Trek--If I ever saw Kirk and Spock again...well, you know, I'm here. One of the reasons we don't have many people here [at the con] is they're probably all over watching Bill and Len's Excellent Adventure as we speak, because they're at the Civic Center, Shatner and Nimoy [at a CreationCon the same weekend]. But there's this little tiny group called Pros--The Professionals. And it's a show that you've never seen, unless you're from England, in which case you won't admit to having seen it because it is total trash. Oh, it is, it is...if it wasn't trash I wouldn't like it. [Laughter.] But I couldn't--some of the stories were really neat and I couldn't stop. So, if anybody's got anything that's been written in the last two years about the Professionals, I want it. And I want it now! [Laughter.]. [3]

Enterprising Women was interesting, but did not accord with my (admittedly) limited experience of fandom. I was astonished when she concluded that h/c was the focus of fan fiction, especially since I have a really hard time swallowing most of what I've seen of it. Interesting that people tend to think that, because she's a woman, she would have a more accurate perception of the field--I felt that, if anything, she was distant and patronizing, the "uninvolved academic observer who maybe went a bit native in the course of her field study, but always maintained at least some objectivity..." [4]