Carol Walske was a writer and zine artist and fanzine publisher. She often worked with Fern Marder. Walske passed away in 2004. 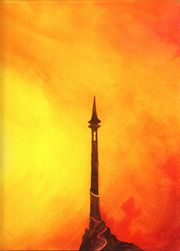 Carol Walske also designed art for her friends to use on everyday household items. Here is a drawing she made for her friend Fern Marder to use on her three ring binder of filk material.

Walske and Marder were editors of The Cavalier, Dagger of the Mind, and Another Time, Another Place, and Arakenyo. Together they co-wrote Alkarin Warlord, Nu Ormenel Collected, Stormbrother and Threshold. Carol's art also appeared in many of the zines she co-wrote with Fern, most notably Nu Ormenel Collected, and she wrote Arakenyo as a gift to her co-editor.

Carol wrote fiction for other zines such as Warped Space, Masiform D, Monkey of the Inkpot, and Mindsifter 2.

Carol had art in numerous other fanzines such as Masiform D, Thousandworlds Collected, Skywalker and even the Leonard Nimoy Association of Fans Yearbook. A sampling of her fan art appears below.

"Carol Walske has been actively involved in Star Trek fandom since January 1974. She has contributed to many ST zines, writing fiction, some articles, and some poetry, and creating artwork and doing layout and design work. The major part of her work has been concentrated on the creation of the Nu Ormenel zines, one of the most developed Klingon universes. Her artwork has appeared in many 'zines and at conventions, and has included works inspired by Star Wars, Dracula, and M*A*S*H as well as Star Trek. Among the zines in which her work has appeared are INTERPHASE, MASIFORM D, ODYSSEY, THE OTHER SIDE OF PARADISE, PROBE,and TETRUMBRIANT. She with Fern Marder, has edited CAPTAIN UHURA and SOFT AMONG THE STARS. They have published DAGGER OF THE MIND as well as four volumes of NU ORMENEL COLLECTED. Co-editor of Favorite Fanzine Nomination.

I've been looking back at some of my old SW 'zines, the ones written in the 1980-1983 era when everyone was trying to write the ending of the first trilogy. My favorite has always been one by Fern Marder and Carol Walske, a writer/artist pair who were also responsible for my very favorite Klingons in their "Nu Ormenel" series (novels, short stories, songs, artwork, poetry, and a full-length alternate-Ormenel parody of Evita). They gave Klingons honor and culture and complexity way back before The Final Reflection or the films or the next generation or even the first ST movie even existed. And they wrote and illustrated the novel-length SW story Stormbrother, published in the media fanzine Guardian as the entirety of issue #5. [1]

In 2014, Carol's friend Fern Marder set up a memorial fanzine collection in her name at Texas A&M University. It can be found here.

A 2005 Interview with Fern Marder

Fern Marder discusses her writing, and her partnership with Carol Walske in the interview, Writers in Fandom: The Fanzine Scene [2]

A memorial page for Carol is here/WebCite at Renderosity.