Another Time, Another Place (Robin of Sherwood zine) 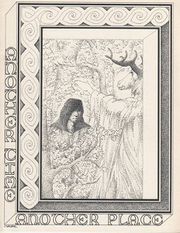 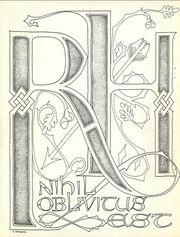 back cover by Carol Walske

Another Time, Another Place is a gen 116-page, full-sized Robin of Sherwood anthology edited by Fern Marder and Carol Walske. Other content by Lee Orlando, Jean L. Stevenson and more.

This zine is mentioned in Writers in Fandom: The Fanzine Scene.

Its Relationship to a Shared RPF Universe

While there is no actual RPF content in the fiction, the stories in this zine are a sort-of riff on The Luminous Times Universe.

Regarding the RPF Elements

This 'zine is the tip of what is actually a very large iceberg—that will remain under water, thank you very much. There's been a lot of writing going on, but most of it is so grossly in the in-joke variety that the pieces will likely never much see the light of day. Be sides, no matter how flattering, it's considered highly tacky, not to mention potentially libelous, to write fiction in which the "similarity to persons living" is intentional, blatant, and not at all coincidence (nothing is ever coincidence...). 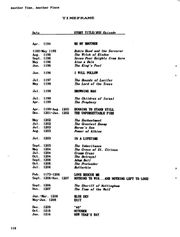 Regarding the Hows and Wheres: Birth of this ZIne

Among the several hundred pages that the bunch of us have been writing to keep sane in the midst of craziness both at work and on the home fronts, we discovered that there were a number of stories that were perfectly Intelligible and, we hoped, print-worthy. We decided that we would like to share them, and the source of their inspiration, with you. But that's a matter for another time, another place (sorry, couldn't resist). Having decided to do this thing, four of us got bitten by the "my God we've got a 'zine going here" writing bug and the number of stories doubled in a matter of weeks. The first time this introduction was written, we had only six stories. Hah! One story led to another. We would hand off ideas to one another, saying, "I've got a great idea for a story, but I'm in the middle of something else, so you write it." We found that—rather than a disjointed collection of stories—we actually had growing what could be termed a "concept 'zine," a collection of stories all integrally tied to one another. This led to such calls as, "if you would change this scene in your story it would be a great foreshadowing of what I've got going in ray story..." You see why this couldn't be a general contribution 'zine -- no normal writer out there would put up with what we did to one another's stories, much less do it in a total of six weeks from "let's do a 'zine" to "meet you at the copy center."

Another factor that led to the publication of the zine: Carol and Fern were attending a Chicago convention and realized that, for the first time, they did not have a fanzine to sell at the event. [1]

Regarding How the Stories Fit Together

PLEASE READ THE STORIES IN ORDER. They are, in fact, in chronological order, historically. A timeframe is provided at the end of the 'zine to place the pieces in perspective among the Robin of Sherwood episodes. Characters and ideas that are introduced by one writer in a given story are highly likely to reappear and be elaborated on in a later story by a different author. (We warned you—nothing is coincidence. ..) Actually the stories fit into certain logical patterns. Most of them represent either beginnings or endings of stories, people or ideas shown to us in the series. To this end, the first story is set prior to "Robin and the Sorceror" (if you don't count the burning of Loxley) and the last few are set after "Time of the Wolf" (boy, are we glad we got this out before the movie— there's no telling what Richard Carpenter is going to do to mess up our carefully plotted universe here...).

Regarding the Story Titles

If you took one look at the Table of Contents and realized that something funny was going on—good for you! Please write and tell us so that we can swap kindred spirit stories. What are they doing here? Think about it, then read on.

However, for what we will assume is that majority of our readers, the titles are "interesting" at best and "weird" at worst. After all, why should the unsuspecting Robin of Sherwood £nn expect to find anything lurking among those trees in the forest...? Come now—need we say it again?—nothing is ever coincidence. You see, we've discovered that our music interests have become integrally involved in our television interests. Every time we turn around, we find another conspicuous tie, link, bad pun, etc. between the music of U2, Irish rock band, and Robin of Sherwood, British television show. Really, how do you walk away from songs named "Scarlet" and "Shadows and Tall Trees"?

One of the things that makes U2's music unique is the often startling message of the lyrics. As Bono, lead singer and most frequent lyricist, has been known to say, this is a group that doesn't write about making it in the back seat of a Chevy. We started out using song titles and lines from songs as the titles for our stories. It was soon obvious that not only the titles but also the verses very aptly fit the themes and characters we were dealing with, and so grew the habit of placing quotes from the song titles at the openings of the stories. Some stories wove themselves around whole songs; the lyric punctuate the prose as naturally as if they had been written by the story writer expressly for the piece. We then at the rest of the songbook (computerized lyric books are the only way to live!) and found segments of the poetry that amplified the stories; these appear as codas, as space permits.

Regarding Some Source Material

Counting the postscript song quotations, we discovered that we are using in this 'zine references to roughly one-third of U2's ten years of song output. And there are a lot more references in the silliness we've been

writing that we didn't dare publish (yes, of course there is an "Angel of Sherwood" story—how couldwe pass up the chance to have the Hooded Man of the suggestive leggings look at the modern man with the blue jeans and ask why any one would want to put little metal teeth there). But getting back to the matter at hand, once we discovered the coincidence (I know, I know, nothing is ever...) of lyrics to episodes and so forth, we started telling our friends about it. And a funny thing started to happen— they all discovered that they not only liked the words, but also the music. And then they started reading about the people behind the music and decided they liked them, too. And so it is that dotted around New York fandom there are numerous people for whom the answer to "have a nice weekend" or "get home safe" now has to be "you also."

Amusingly, when the zine first premiered at a Chicago convention, the inclusion of U2 song titles and lyrics was noted by fans who were perusing the dealer's room. A few immediately connected the publishers of Another Time to the creators of the Luminous Times Universe. "And that's how we knew that our copies of LT had spread far beyond what we had initially intended - when random strangers come up to you at events and are able to connect a Robin of Sherwood zine to U2 fanfic, you know there is a lot more copying going on. The only reason we were unhappy was that we had requested LOCs as part of the conditions of copying and sharing. "[2]