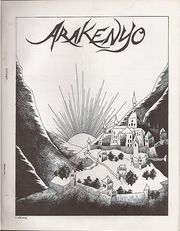 Arakenyo is a gen Star Trek: TOS zine written by Carol Walske that contains 20 pages. It was published in 1979 and is a Klingon ballad and art work. It was written as a birthday present from one editor to another.

"If you haven't gathered as much from our address, Carol and I share an apartment. Have you ever tried to keep a secret--much less a secret project-in-the-works--from your roommate?

In August of 1977, for my first birthday in the apartment, Carol decided she wanted to do something different. Not knowing what was going on, I hounded her--especially when she locked herself in room (the only room we have where you can lock yourself in) and ordered me to "play piano till it's done."

The project, with certain modifications, is presented here. I'm pleased to share it—the effort and talent that went into it shouldn't be hidden in the files of one person.

About the story—Arika Keorl is 'my' character. Arika was the first character that I worked with Carol when she invited me to collaborate on the series. You might say Arika was created to my specifications: father—Kang Keorl; mother—Koshira Kothir (Kor's sister); status—Emistekka (first daughter). Carol asked me who I wanted Akika to get involved with. At that point, (back in about May 1976) I could only think of two possible people: Roan/Kirin and Karras. So I chose Roan. Since then, the 'adventures' of Arika and Roan, and Karras, have been bouncing around in our back files. Some of the story surfaces in The Homecoming. The events at the end of Arakenyo are set after 'The Homecoming. Hope you wont mind our revealing the ending a bit early—but even a close reading of a Nu Ormenel timeline does that. Arakenyo is a kilingaven fireside tale, a court legend, a visual ballad. Carol keeps insisting she 'can't write poetry.'If this doesn't qualify as poetry, I'll hang up my pen."