Dagger of the Mind 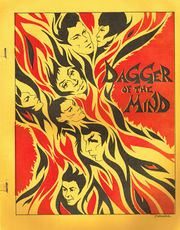 front cover of Dagger of the Mind, Carol Walske 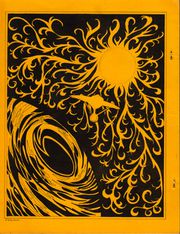 back cover of Dagger of the Mind, Carol Walske

So you want to do a Star Trekzine. .. Or. .. What are we doing out here negotiating with all these humans, Vulcans, etc. . .

Dagger has been quite an experience. After producing mostly in-house projects, we suddenly found ourselves out in the brave new world of a general Trek con tribution zine. As usual, this zine just sort of snuck up on us. After nine months of publishing six Nu Ormenel projects and editing two zines for friends, we found ourselves talking randomly about general Trekzines. That was September of '79. Two weeks and a large phone bill later [1], we had a writers' draft deadline of December 31. Artwork in April. Publish in May. Aargh! There've been a lot of conferences. A lot of sharing. We've learned a lot. We hope we've taught a little. There were good days and bad days—praise bet o those contributors who helped us through those bad days… We hit an unusual problem in March: our page-count estimate had climbed to a frightening 192 pages. That's 96 sheet of paper. The heavy-duty stapler will only staple 93 sheets. And we were still editing copy. Carol did some fast figuring and the typing format was revised (again!) to accommodate more copy per page. We made it. We consider ourselves extremely fortunate in the stories we received for Dagger. We set out to balance the zine in terms of characters, themes, and moods. Our contributors were wonderfully cooperative. We asked for — and got — a story each for Kirk, Spock, McCoy, and Uhura, and Vulcans, Romulans, and Klingons. And Venturians. We did not realize it—or plan it—at first, but it soon became apparent that Dagger was going to be something of a 'universes' zine. All of the stories included in Dagger were written by persons who have written and/or writing many other stories. In most cases, the stories here are related to or are part of the writer's own outlook on Trek— their own universe or character series. The stories here are, therefore, a sampling from a rather large body of literature produced by the authors and, as such, will be for some readers an impetus to seek out related stories in other places. To facilitate this, the last page of the zine is a list of the authors and their mailing addresses. We urge our readers to write to the authors to inquire about the availability of these other stories. The poetry for Dagger came in— unusual and equally diversified. And some was written on those 'up' days or 'down' days of putting the zine together. We tried to get our writers involved in the pairing of artwork to the text. We're grateful to the artists who came through for us in grand style on comparatively short notice.

And to everyone involved in putting Dagger together—thank you for putting up with our kinds of madness.

The Authors Describe Their Universes

From the zine's last page:

See reactions and reviews for Gift of the Masters of Time.

See reactions and reviews for The Bronze Cord.

See reactions and reviews for Afro-Disiac.

See reactions and reviews for And All My Days Before Me.

[zine]: The outstanding fanzine of the year, in my opinion, was "Dagger of the Mind" ... The editors gathered talented, popular fanzine writers who wrote Star Trek fanzine series, and asked each to write yet another story in their series for this publication. Juanita Salicrup wrote a story in her "Crossroads" series, Mindy Glazer from her "Feldman" series, Jean L. Stevenson from her Vulcan society series, Ingrid Cross from her McCoy series, Fern Marder and Carol Walske from their Nu Ormenel series, Winston Howlett from his Uhura series, Anne Elizabeth Zeek from her Romulan Cytherean Cycle series, and Leslye Lilker from her Sahaj series. All were first-rate tales. [3]

[zine]: Most of the stories in this zine are out of some series or another developed to express an author's viewpoint with regard to some character, race, or event -- whether pre-existing in Star Trek or grown up in the author's mind. A series exists because the author has found she hasn't finished what she had to say in one story; and a series builds by accretion, as she throws more and more into the works. Eventually, either the author gets tired and drops her series, as Jacqueline Lichtenberg with Kraith, or someone else picks it up, as Jean Lorrah did Kraith, or it becomes such a conglomeration of obscure references nobody can understand it, as... Kraith. A good series never dies; a good series is accessible at any point to the new reader. This means that, while a newcomer might willingly go back and read the previous works in the series, his understanding is not precluded if he doesn't. In Dagger there's an offering from Ingrid Cross' McCoy series, Mindy Glazer's Tales of Feldman, Winston Howlett's Swahili series, Leslye Liker's Sahaj universe, Jean Stevenson's Seasons of the Dance, Ann Zeek's Cytherean Cycle, and the editors' Ormenel. If you are hooked on any of these, buy the zine; you'll enjoy it. The less indiscriminate reader, though, might find herself at loose ends in some of the stories. The editors and writers don't tell you what went on before... Marder and Walske's piece, 'A Winter's Dream,' is probably the best in the zine as well as the easiest to get into. They explain in context the concepts and characters introduced in this segment, as Kor turns over his sword of the Ormenel to his son Karass. Less clearly explained are the events in 'Afro-disiac' by Winston Howlett -- we never do find out why the natives of Breesia were so restless. 'And All My Days Before Me,' though smoothly written, is something of a shaggy dog story; McCoy goes through a lot of mental gyrations over his relationship with Natira that suddenly on the last page he finds were not necessary. 'Gifts of the Masters of Time,' 'To Lead, To Follow,' and 'The Sun-King's Shadow' were of different degrees of impenetrability: 'Gift' because Salicrup never used one word where ten would do. 'To Lead,' because its cast of thousands was next to impossible to keep straight; and 'The Sun-King' because it was written like the King James Version of The Lord of the Rings. The stories are not bad; it is only the way they are told which makes them murky... 'Equal Time,' yet another Christmas-on-the-Enterprise story at least does have a note of originality. Said note is supplied by Ensign Feldman in a plea for holiday ecumenism. It's cute. 'The Bronze Cord' differs from Lilker's Sahij stories in that the cooed-over destruction perpetrated by the brat is all off-stage, as is Sahaj. But the adults are all still moon-struck mental multi-paras who talk about literally nothing but Sahij. On the good side, there is some background on the only sympathetic character (to my mind, anyway), the kid's 'unnatural' natural mother, T'Marr. 'Sail the Wind' was up for a Fan Q in the poetry division; it came by its nomination honestly... Most noticeable about Dagger is its nice, clean layout and rather impressive art. [4]

[zine]: This excellent 'zine is a talent showcase for some of fandom's most interesting writers, poets, and artists on the subjects they know best. Most of the writers are noted "series" or universe writers, and you can consider this a sampler of their work. You'll probably find a series worth following up on. Mailing addresses for the individual writers are listed at the back to facilitate this. I believe that this sampler is sufficiently important to discuss each story briefly. "Gift of the Masters of Time", by Juanita Salicrup -- Before the story starts, Spock returns the focusing crystal to the Masters of Time in an adventure that costs Kirk's life and permanently disables Spock. The Masters come to Spock and offer him a reward -- to change one incident in the past. The ethical and logistical implications of the choice constitute the story. "Equal Time", by Mindy Glazer (Tales of Feldman) - Christmas on the Enterprise will never be the same after its Jewish ensign has her way. "To Lead, To Follow", by Jean L. Stevenson (A Movement in the Seasons of the Dance) --This is a hauntingly beautiful tale of pre-Reform Vulcan which establishes the culture which so needed Surak. The central character is T'Klea, the am'di or Mother- who-speaks-to-god. The god is a waist-high pillar of rough-hewn mountain rock that goes everywhere with her nomadic tribe. Through T'Klea, the god attempts to change a warlike nomadic tribe into peaceful agriculturalists. You won't forget this one. "And All My Days Before Me", by Ingrid Cross (McCoy Series) -- It is five years after FOR THE WORLD IS HOLLOW AND I HAVE TOUCHED THE SKY and McCoy follows Natira to Yonada II to make the big decision. "A Winter's Dawn" by Fern Marder and Carol Walske (Nu Ormenel Series) - The last days of Kor, the Klingon revolutionary. "Afro-Disiac", by Winston A. Howlett (Swahili series) -- Uhura's beauty causes a riot on shore leave. "The Sun King' s Shadow", by Anne Elisabeth Zeek (the Cytherean Cycle) - A fairy-tale version of "The Enterprise Incident". "The Bronze Cord" by Leslye Lilker (The Sahaj Universe) -- In this universe - Spock has an illegitimate son Sahaj who resulted from his seduction by the Vulcan ambassador to Ventura, T'Marr. Sahaj was virtually neglected by T'Marr, and if it wasn't for a neighbor, a human, the Ambassador Jeremy Gill, Sahaj would have grown up totally unloved. T'Marr also kept the existance of the child secret from Spock for ten years, until her death, when guardianship reverted to Spock. It was not love at first sight. This story takes place some time after Spock assumes the guardianship of Sahaj. It relates the first meeting of Spock and Ambassador Gill, the new Terran ambassador to Vulcan. He wishes to resume his close relationship with Sahaj, but will Spock allow it. Sahaj is far too human as it is. [5]