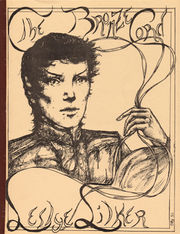 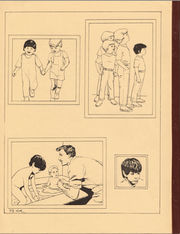 back cover by P.S. Nim

It was previously published in Dagger of the Mind.

'The Bronze Cord' is a reprint of a Sahaj Universe story that originally appeared in the fanzine, Dagger of the Mind , edited jointly by Fern Marder and Carol Walske, in 1980. Dagger's print run sold out quickly and many people who wanted to read 'Bronze' were unable to do so. Due to public demand, this 'mini-zine,' containing the original story and artwork, was made available.

'Bronze' picks up where 'Crosswinds' (IDIC 6/7/8 -- sold out) left off. Sahaj has accepted Spock, his natural father, while still loving Jeremy Gill, his 'adopted' father, who raised him for ten years on Ventura. In 'Bronze' Spock and Gill meet for the first time. Price: $5.00 (postage included as a gratuity)

A reprint of the Sahaj Universe stories that appeared in IDIC 6/7/8 may be possible. Please send a SASE if you are interested in this project.

From an ad in Universal Translator #17: "Photostated copies of this Sahaj story, including artwork, will be available shortly. It tells of Jeremy Gill's -- the man who first raised Sahaj for the first ten years of the boy's life -- first meeting with Spock."

From an ad in Universal Translator #21: "'The Bronze Cord' is a reprint of the Sahaj universe story that appeared in Dagger of the Mind and is rendered as a mini-zine of 28 pages. It contains both the original artwork by Walske and Nim, and the music and lyrics to Lilker's original Sahaj filk, 'Weep No More.' New cover by Mary Stacy-McDonald."

From the Zinedex: "Two years after Spock has taken Sahaj from his foster father Jeremy Gill to put him in the care of Sarek and Amanda, Gill has become ambassador to Vulcan in hopes of being near the boy again. Enterprise is taking him there, and all the crew conspire to keep Gill and Spock from coming to blows."

It is unknown how the versions differ. It is unknown what form the rewritten version is in: profic, fanzine, print... ?

Sahaj series: Two years after Spock has taken Sahaj from his foster father Jeremy Gill to put him in the care of Sarek and Amanda, Gill has become ambassador to Vulcan in hopes of being near the boy again. Enterprise is taking him there, and all the crew conspire to keep Gill and Spock from coming to blows. Delightful writing, excellent characterization for both the new and familiar players. Nice touch in this one is the game of Olympic Chess that runs through Gill's mind at opportune moments throughout the story. [2]

'The Bronze Cord' differs from Lilker's Sahij stories in that the cooed-over destruction perpetrated by the brat is all off-stage, as is Sahaj. But the adults are all still moon-struck mental multi-paras who talk about literally nothing but Sahij. On the good side, there is some background on the only sympathetic character (to my mind, anyway), the kid's 'unnatural' natural mother, T'Marr. [3]

"The Bronze Cord" by Leslye Lilker (The Sahaj Universe) -- In this universe - Spock has an illegitimate son Sahaj who resulted from his seduction by the Vulcan ambassador to Ventura, T'Marr. Sahaj was virtually neglected by T'Marr, and if it wasn't for a neighbor, a human, the Ambassador Jeremy Gill, Sahaj would have grown up totally unloved. T'Marr also kept the existance of the child secret from Spock for ten years, until her death, when guardianship reverted to Spock. It was not love at first sight. This story takes place some time after Spock assumes the guardianship of Sahaj. It relates the first meeting of Spock and Ambassador Gill, the new Terran ambassador to Vulcan. He wishes to resume his close relationship with Sahaj, but will Spock allow it. Sahaj is far too human as it is. [4]