Warped Space is a multimedia gen and het (with very occasional slash) zine. Its content was purely Star Trek: TOS until issue #18 when it published a Man from UNCLE story, the first of that fandom in a zine, and became a multifandom with an emphasis on Trek after that. The zine has Star Wars content and other multifandom content in issues 28-52.

from a 1974 flyer: Gordon Carleton portrays The Big Three indulging in a bit of literary fun 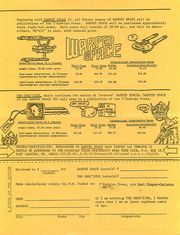 a flyer, announces the change in publisher

The fanzine was originally sponsored by The Michigan State University Star Trek Club (MSUSTC) and was very much a club zine containing material and article primarily for a local readership; the content had many in-jokes and comments about campus places and activities. By the second year, however, Warped Space had a national readership and drifted away from this provincialism. These first few years were also a time of some legal battles regarding ownership. One example was the disclaimer on early issues that changed from the zine being "an official publication" of the fan club, to being "closely associated." See much more below at A Legal Battle. 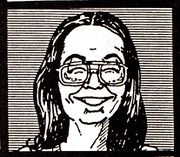 a portrait of Lori Chapek-Carleton that appeared at the top of the title page of many issues of Warped Space, artist unknown 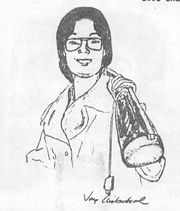 Lori Chapek (editor), as drawn by Jane Clinkenbeard, detail from a page in Warped Space #3

Starting with issue #21, it was published independently under Lori (and her husband Gordon's) own imprint, T'Kuhtian Press. Reprint rights to issues #1-21 remained with the University Club.

There were two sexually explicit issues, #10 and #20. After that, the X-rated zines spun off to become Obsc'zine.

There was also a compilation issue that collected material from issues #31-#51.

The publishers had long-planned a 53rd issue, but it was never completed. It was to have included: a Beauty and the Beast cover by Susan W. Perry-Lewis, a Beauty and the Beast story by Rebecca LaFlamm, the story An Il-Made Jedi by Deborah June Laymon that was to have been illustrated by Kate Nuernberg, and a Ladyhawke story by Anne Elizabeth Zeek.

Information about the contents of individual issues is here:

Some Comments About the Zine's Cost

In 1981, the editor writes a LoC to Alderaan #9 and comments on an earlier letter which was about the cost of zines. Chapek-Carleton writes:

Concerning the question of zine prices, you needn't fear that Alderaan's price increase is unjustified. I think sometimes that fellow zine editors realize much more clearly that the general readership how much boosted printing and supply costs can affect a zine!... Everyone knows the effect of inflation and the increased postage rates! As an example, the last issue of Obsc'zine came out to something over two years ago, and the cover price at the time was $3.50. #4 has just come out, and though I'd said in a flyer between last May and now that the new cover price would be $4.50, I found when time came to actually tally up the total printing bill, that cover price would have to be a minimum of $5.00, which I've set it at. In honorinq all previous orders for the issue, many people paid only $4.45 including postage, so I'm takinq somewhat of a dunking, but I'm fortunately able to print 100 copies over the number of copies reserved, which will hopefully take up the slack. Of course, for subscriptions to #5 onwards, I'll now have to revise the prices upwards slighly to reflect the cover price increase. I think zines like Warped Space, Obsc'zine, Alderaan and Interstat etc., are more hard hit by increases than one-shots or zines which come out infrequently, like Pegasus or Skywalker, and are able to take reservations, with total price due upon receipt of imminent publication date. I feel that most zines are fairly priced.

The printing quality of many early issues was very poor and erratic, something that fans constantly complained about in their letters of comment in late 1975 and early 1976 (see those issues).

The printer started off on a bad foot, punching holes on the wrong side of the first issue's paper. [1] 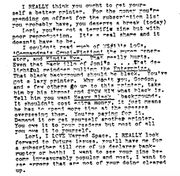 One example of the poor reproduction this fan is talking about, and a BIG topic of conversation in the zine during the early years. 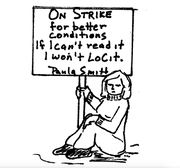 In "Warped Space" #15, there is an illo of Paula Smith refusing to write any more letters of comment until the problems with production are fixed.

We've had disparaging comments on our printer. None knows better than I how lousy a job they do! However, we are partially funded by MSU and can only afford to get as good a printer as they give us money for. Better printers cost as much as 2/3 more per issue. But there hope - new budget requests will be sent in shortly and with luck (keep your fingers crossed) WS12 just might be done at a good printer! All I can do is apologize and say to keep on hoping. We'll do the best we can to make it easier for this to be read ... [2]

I REALLY think you ought to get yourself a better printer. For the money you're spending on offset for the subscription list you probably have, you deserve a break today. Lori, you've got a terrific zine but with poor reproduction. It's a real shame and it doesn't have to be.

I couldn't read much of WS#13's LoCs, 'Commandra's Cruci-Fiction.' the rumor generator, and 'Mind's Eye.' That really hurts. Even that back illo of Joni's... that delightful reindeer pulling the Enterprise. That black background should be black. You've got a lazy printer. Why don't you, Gordon, and a few others go up to this printer, take him by the throat and SHOW HIM what black is. Tell him you want HEAVY BLACK backgrounds. It shouldn't cost extra money, it just means he has to spend more time at the presses overseeing them. You're paying for it. Demand it or get yourself another printer. You owe it to your readers but most of all you owe it to yourself. Lori, I LOVE Warped Space. I REALLY look forward to future issues. You'll have me for a subscriber till one of us declares bankruptcy or both! I want to see your zine become immeasurable popular and most, I want to see errors that are not of your doing cleared up. [3]

First of all, and you know it, the printing is back to being shit. Are you sure there is no way you can get better printing out of the University Press? Personally, even if it meant that WS came out less often, I'd like to see the printing improved. Even if it means that you go to a commercial printer and pay more. [4]

You blew it! Akk! 13 coulda had class, coulda been yer best ish to date, instead it stinks! Suppress that printer! Pinch his supplies! Off with his trade! You get the message, I'm sure. [5]

Some Comments on Its Circulation Stats

"Warped Space" has a circulation of 800. "I believe Kraith [collected] has a print run of 1000, which I sincerely hope I never reach! We've held steady at 800 for some years now, as readership hasn't really fluctuated all that much, and I hope we stay steady, or even drop slightly. I wouldn't be surprised to find that if one polled the zine editors/readers, one would find that since Carol wrote her article, the average zine price is now $6.00 or $7.00. Postage rates are getting ridiculous, and I urge the use of UPS [United Parcel Service] whenever possible. [6] 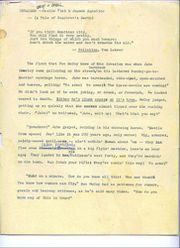 The Cave Story: It was in the second adult issue (#20, 1976) that Shelter by Leslie Fish was published. Shelter was the first true first time slash story in fandom. (It was also the first cave story -- a genre that has receded in importance now, but was once very popular: if nothing else works, strand them on a planet with a nearby cozy cave, and everything will work out fine.)

The first Man from UNCLE story published in a zine was in issue #18.

Leslie Fish's novel The Weight Collected was published in pieces over a period of several years in "Warped Space."

"Warped Space" was first published by the Michigan State University STAR TREK Club while its creators were students. The zine's creators probably never imagined the zine would have a run as long as it did.

Between 1975 to 1980, there was a lengthy legal battle over assets, reprints, profits, ownership, and publisher's rights after those students graduated, or during their enrollment.

a group shot of many issues, clearly a party!