The Big E is a older Star Trek term. It refers to the starship Enterprise. 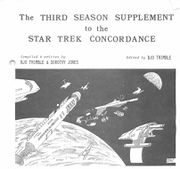 art for the title page of The Star Trek Concordance (1973), artist is Greg Bear, the illo is titled "Building the Big E in space."

The term is used by fans when talking about Star Trek. It is not a term the characters themselves use in fanfiction.

It dates back at least to 1971, when artist/author Karen Flanery used it several times in commentaries and letters published in Tricorder Readings. 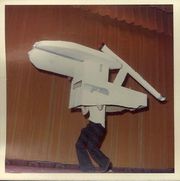 from a Star Trek convention in the early 1970s, an unidentified fan recreated The Big E

From the editorial of Spockanalia #5: "Remember when Kirk talked about the successful Apollo flights in 'Return to Tomorrow." Once again, the Big E. scores a first in celebrating the arrival of men on the moon. Congratulations to the astronauts also from SPOCKANALIA for not only doing their our thing, but doing it on time, no less!"

From a fan's comment about the story, "For Sale, Must Sacrifice" in the zine Warped Space: "It's a very believable get-Spock in which the Merry Men of the Big E once again run afoul of the Prime Directive."

From a description of Tales of Feldman: "It's also quite funny, and was quite well received, despite the fact that little of the action happens on the big E."

From an issue of The Halkan Council: "Why isn't' there a chaplain aboard the Enterprise? Thought the Big E must be efficiently run, surely they can allow for religious observance and spiritual counseling?"