For Sale, Must Sacrifice

For Sale, Must Sacrifice is a gen Star Trek: TOS story by Paula Smith. 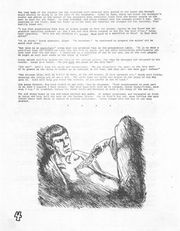 It was published in Warped Space #15 and is online.

This story was one of the influences for A Private Obsession.

... I enjoyed the LoC's, of course, and I doubt if I would have minded had there been more. After all, the essence of fandom is communication, and LoC's in a 'zine are one of the most important ways in which fans communicate. So we already have HALKAN COUNCIL; the more communication, the better; the more LoC's, the better. They provoke me to thought. Such as, I agree with Gerry Downes that Kirk takes an awful beating most of the time, and he really doesn't deserve it. His worst fault is merely that he's shallow.

Also I think I'm a bit confused by the way people are defining a get-somebody story. When I think of the term, I find that the infliction of physical pain is a secondary element; far more important is the psychological effect of that pain, especially on a watching other person, preferably a good friend of the sufferer. The aim seems to be to create a set of gut-wrenching emotions in the observer, which in the best of the stories is paralleled in the reader. At least I find these stories more effective than the ones in which there is only one character who is being tortured. In brief, the emotional pain of a get-story is more important than the physical pain. But other people seem to use the term in different ways; the difference in definitions may in fact be behind the disagreement over "For Sale, Must Sacrifice." [1]

the best one is 'For Sale, Must Sacrifice.' in which Paula Smith again brings new meaning to the phrase, 'you always hurt the one you love.' It's a very believable get-Spock in which the Merry Men of the Big E once again run afoul of the Prime Directive. For some reason, it just seems like the kind of a thing that would REALLY happen to them. This is a bloody (and green one, at that) tale, but not sickeningly so, and there's a pun in the title. [2]

Leading off the fiction this time is 'For Sale, Must Sacrifice' by Paula B.G. (Blood and Guts) Smith. This is another in the series of Paula-gets-her-rocks-off with Spock as the subject... again. As you might remember, Paula killed off Spock five times in her novella The Logical Conclusion. In this happy go lucky story, Spock meanders unsuspectingly beneath a tree, is attacked, and finds himself the unfortunate victim scheduled for sacrificial surgery at dawn. Through the whole gory mess, Spock makes nary a sound of protest and blithely allows his captors to ostracize him from the Enterprise and Osterize his body. It all served a purpose in TLC but its almost pointless in this story and makes me wonder why the editor included it in WS. The only way Paula could profit by this story is to sell Star Trek barf bags with each copy. Need I say more? [3]

PaulA Smith can claim what she likes, but "For Sale, Must Sacrifice" is a get-Spock story, a little long for what it has to say, and sadly mistitled. It's an interesting idea; I can't put my finger on precisely what is wrong with It. Why do I feel that the story, same plot, would somehow move me more if interpreted by C.R. Faddis? The Siegrist illos of this story were particularly nice, too. [4]

I must apologize to P. Smith. P. showed me "For Sale, Must Sacrifice" in December [1975] & I did not take the time to read it with care. I did today and that is why I apologize, for this is a very interesting story in more ways than one. PaulA has written a nice 'alien culture' tale that is, for once, told from the alien culture's point-of-view, rather than from the usually biased 'Earthnocentric' point-of-view. This style is conveyed not only through the action & dialogue, but also thru the narrative. Certain lines there, well, I just really liked them. "Green flowed onto red and it was vepy unusual." A certain subtle elegance that reminds me of someone's writing ... can't quite place who ... maybe Gertrude Stein... As I was reading it I found myself thinking there wasn't enough characterization in terms of Kirk and Spock, that there was some in-depth in volvement needed, some lines anyway. Like, why don't we see what happens when Kirk gets Spock back to the ship & why in Ghod's name don't we get Spock's point-of-view while he's being carved up & why doesn't he say anything, or try to communicate? But somehow, by the time I finished the story I had made up my mind that PaulA was right not to put those things in. Oddly enough, this isn't Spock's story, nor is it Kirk's. It is the Norvadi's. Both Spock's silence and Kirk's lack of 'appropriate response' at the climax heighten this fact. It is for this reason, I suppose, that PaulA insists this is not a 'get-Spock' story. If it had been, it would have been basically from Spock's point-of-view & it might well have ended up another "Spock Enslaved." I have the feeling some folks won't like this tale - but I do. Nice job, P. [5]

"For Sale, Must Sacrifice." Reasonably good development of an alien culture, within the space limitations of a short story; I particularly liked the of use of 'the insane people' and 'the evil star,' and other phrases dropped without heavy-handed explanation; after all, they know who they are and what they're about, and when the story is presented from the perspective of the alien, explanations designed for us would be out of place. There is a danger with this type of presentation, however; a reader may well be very skeptical and impatient at first, thinking, "Well, here's all this weird stuff — am I going to be able to tell what's going on, or is it all going to seem like gobbledygook?" I think PaulA Smith avoided that trap very nicely, and I'm impressed that she could do it so compactly. I liked the idea that the Federation know-it-alls don't always knew what they're doing, as when Bhargava assures Kirk that they have been 'much too careful' to make contact with the natives. And if anyone retorts that they didn't talk to the natives, or deliberately present themselves, we must say that contact takes many forms; I think this is one point of the story. And if this isn't a 'get-Spock' story, what is? Smith does like to see green blood flow, witness "The Logical Conclusion." One last not-too-important comment — I'm not sure I like the juxtaposition of a cutesy title and a not-so-cutesy story. [6]

"For Sale, Must Sacrifice" — o.k, I do see why PaulA Smith says it's not really a 'get-Spock' story; the real point is a look at religious superstition ... a fairly understanding look, I think. Spock gets it because his heart isn't where it should be (physically, for a change!). It also helps the impact that his blood is green (and it's reassuring to those of us who care that Spock is more likely to survive such treatment than any one else). He is incidental to the main point of the story, however, and is uncharacteristically ineffective; it seems that PaulA is downplaying his part to put the emphasis where she wants it. The end result is that Dickson's expedition, and Spock and Kirk in particular, bring about a change in the religious beliefs of the people of Ashanti — "the old ways do not hold ... any more." Human sacrifice is no longer appropriate — their god wall provide the sacrifice. And who is to say, after all, that their god Jensh did not use the outworlders to bring this new truth to the Norvadi? ... there is a certain schizophreniz in the Enterprise's mission to seek out new life and new civilizations' under the Prime Directive; obeying both at once verges on the impossible. [7]

"For Sale, Must Sacrifice" — GAAAAH! PaulA Smith, you lied to us. You are Harlan Ellison. [8]

"For Sale, Must Sacrifice" is one of those stories which stick out in my mind. Telling the tale from the alien viewpoint and adopting such a matter-of-fact and detached style would have left little room for emotional involvement if the sacrifice had been a stranger. Instead, it was Spock, Spock who was being methodically and irrevoccibly (not to mention helplessly) murdered. To tell you I felt frustrated by the end of reading the horrible thing would be an understatement! A very fine piece of writing... [9]

Another influence [for A Private Obsession ]: Paula Smith’s gen story For Sale, Must Sacrifice, which was published in Warped Space #15. Paula did a wonderful job examining just how the Enterprise crew might appear to a woman from a primitive culture. Her narrator is exposed to events she can’t possibly understand and can only interpret in the context of her own culture. (This odd creature — Spock — has been captured and is about to be used as a religious sacrifice. Kirk appears in a shower of golden light — i.e., the transporter beam — an obvious emissary from the gods, here to collect their offering.) Paula created quite a sense of mystery and wonder with this story. [10]