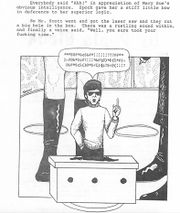 Harlan Ellison (1934-2018) was a colorful, often controversial science fiction writer and fandom personality. He was involved in fandom for many years before he "went pro," and edited several fanzines in the 50s and 60s.

"Robert Bloch, author of Psycho, called him “the only living organism I know whose natural habitat is hot water”." [1]

From his bio in a 1978 convention program:

But Ellison is more than just another pretty face. He is a cult figure as well. He is one of those truly rare individuals with enough personal power to command a loyal, even fanatical following. There exists almost as many stories about him, from claims that he is a "Trained Killer," to the time he heaved a book at an inattentive student. Whatever else he is or has done, one thing is certain, Ellison is a complex, fascinating personality on stage and off -- articulate, outspoken, and unpredictable. [2] 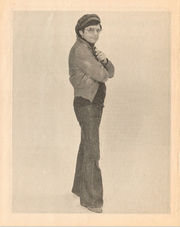 inside page from the 1977 program book for Space-Con, guest of honor Harlan Ellison strikes a pose

There is much out there about Harlan Ellison. Below are some small bits one may not find elsewhere: 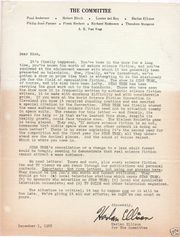 In 1979, Isaac Asimov described meeting him in 1953 (he later goes on to describe the young Ellison purposefully insulting him to his face and their subsequent friendship):

At that same convention I met another personage, not a professional author yet, but destined to become one, and a more colorful one, perhaps, than anyone else in science fiction, even myself.... He was a little fellow. He insists he is five feet, five inches tall, but that is, I think, by a specially designed ruler. He is five feet, two inches tall by the internationally accepted yardstick. Either way he had sharp features and the livest eyes I ever saw, filled with an explosive concentration of intelligence.[15]

A fan in 1977 wrote about her impressions in a con report:

Harlan Ellison has a reputation. It is not easy to sort through all the gossip and half truths and try to find out why he is what he is. I don't like what I saw.

He is outrageously funny and sarcastic, worldly cynical, and a ladies man. He gets his way through intimidation, being considerate only when it suits him. He admitted that a great many of his works are revenge stories. When someone or something crosses him, he dashes to his typewriter and draws the poison out of his system, putting it on paper, and selling it for a great sum of money. He jabs, cuts, and tears to pieces his subject matter with bitter humor. The strongest example coming to mind is the story he read on Sunday night at the Con. It dealt with the "best f--k in the universe". I roared with laughter with the rest of the audience as he moved in and out of the different characters white he read. It was uncanny to see him shift from a bulling interrogator to a meek and hempecked temponaut (time traveler). When he was finished, I felt a faint after-taste of bile. The more I thought about the story -- "disgusting things" (Mr. Ellison's noun), "coitusing" (Mr. Ellison's verb) the human race to death -- the more I wondered how much of it was a reflection of his own life. The story was stimulating--physically. Sex was reduced to an exercise, indulged in only for the pleasure of orgasm.

Mr. Ellison's bed-hopping is almost legendary. It's an open secret he shared his bed at the Con with a nineteen year old girl. Cynicism. Sarcasm. Intimidation. Sex for the hell of it. What does it point to? A clue to Harlan Ellison's character; am embittered, dirty old man, ready to pounce on anything that threatens him. He can't stand it when an editor rewrites his work. If his stories are part of himself, does he consider an attack on his words an attack on himself? Probably.

I suspect very few people know what lies deep inside of him. I can only guess, but I see is frightened, insecure, unloved little boy inside. Mr. Ellison tries to prove his courage by putting on a tough act. He looks for security in material things, writing as much and as fast as he can to make money. He looks for love between a woman's thighs, moving to the next one when he doesn't find what he is looking for. I wonder if he will ever find it. [16]

Met Harlan Ellison? Tell us what a great guy he really is. (We accept all kinds of fantasy.) [17]

One of the most intriguing story topics is Harlan Ellison, a tru-fan turned professional writer, and very successfully, too. Harlan, who is infamous among fandom and mundane world alike, can be seen once or twice a year on the Tomorrow show, being interviewed by a cowering Tom Snyder. Snyder can usually be seen after one of Harlan's visits counting up the number of lawsuits Harlan has provoked and praying that the network won't fire him because of the way Harlan tore apart television this time. Harlan Ellison, once called the "Godzilla of Munchkinland" by his fellow science fiction writer David Gerrold, can be likened in many respects to the fannish lore counterpart of Trickster, a basic character in Amerind folklore. There are obviously many differences, but the resemblance runs deep. Unfortunately, Harlan, though a mythical character, does exist. [18]