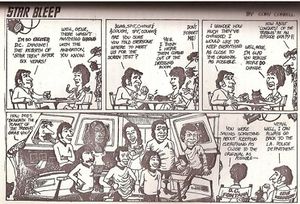 D.C. Fontana and Gene Roddenberry in a cartoon from One Trek Mind #2, by Cory Correll 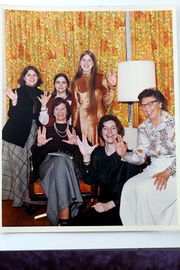 undated photo of D.C. Fontana and some unidentified fans, taken at an unknown con (Fontana is in the center wearing pearls.) Louise Stange may be in the brown dress with the long hair, Nancyann Hiera may be the fan in the grey and black plaid skirt. Ruth Berman may be the fan in the white skirt. 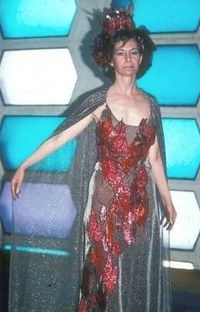 D.C. Fontana in the 1975 Masquerade at Equicon

She started out as Gene Roddenberry's secretary, then went on to write many episodes under her own name as well as others.

After Star Trek she produced Star Trek: The Animated Series as well as writing scripts for Star Trek: The Next Generation and other science fiction shows such as The Six Million Dollar Man and Babylon 5.

She has also written for non-science fiction television, video games, comics, and at least two novels. She is responsible for the creation of Spock's parents Sarek and Amanda, and for much of Vulcan culture.

In an interview with Walter Koenig in T-Negative #7, the actor says that he misses Dorothy Fontana, who was no longer script editor on the show: "She always had an insight into all the characters. It might be just a few lines, but there'd be something in them that brought the character out."

D.C. Fontana was the guest of honor at Equicon in 1974. In the program book was a short bio:

The FONTANA touch way given to STAR TREK'S token alien, MR. SPOCK; who had boon originally added only for extra interest. Fans will realize, on seeing the re-runs, that early SPOCK reactions and attitudes were subtly muted and made more mysterious; almost all of which can be laid at D.C.'s door. Her ability to characterize an interesting role into a very real-seeming personality made MR. SPOCK into the worldwide attraction he is to this day. The development of several of the characters is due to D.C.'s writing and sensibility—and ability to touch the TV audience with her own visualization of a character.

[Her accepted script for "The Streets of San Francisco"] was a special coup because the QM Production company has a reputation for NEVER using female writers. To make their point against growing pressure, QM asked D.C. to use her full name, DOROTHY CATHERINE, on the title listings when they bought her script. While D.C. is not a militant 'libber', she does believe that women are human, too.

Influence on Canon, and Fanon

Here’s some background on what has come (in fandom) to be called the ozh’esta (the finger kiss):

The first time we see the “Vulcan kiss” gesture it is in Journey to Babel, where it wasn’t actually written in the script. The actors playing Sarek and Amanda asked Leonard Nimoy about the body language and gestures used by Vulcans, in order to give their performance continuity with what had been developed in Star Trek so far. It was Leonard’s idea that hands and hand gestures are deeply significant to Vulcans, and between the three of them the actors worked out the now-familiar two-finger touch as the way a Vulcan would interact with his bond-mate.

Then fan writers – rabid as ever to develop the full backstory (and bedroom story) behind every thing given us on screen – took over. Essays and fanfiction quickly developed the fannon (fan-made cannon) that we are familiar with today: the gesture is the Vulcan equivalent of a human kiss; it’s a touch through which the telepathic bond crackles like lightening between a bonded pair; Vulcan hands are erogenous zones that one only fondles in private.

Gene Roddenberry was extremely aware of and respectful towards the development of fannon in the early years of Star Trek. He bought the fan zines that were in circulation at that time, he kept them in the production offices, and he insisted that the show writers read them and keep them in mind when writing new episodes. (These were golden years for being a fanfiction writer, needless to say. GOLDEN.)

As a result of Gene’s requirement to read fan fiction, show writer Dorothy Fontana was fully aware of the fannon about Vulcan sexuality when, during the 3rd season, she wrote The Enterprise Incident. During pre-production, the new producer on the show (the unfortunate Fred Freiberger) went and added a rather torrid love scene between the commander and Spock, very much against Dorothy’s wishes. Infamously, the scene called for (and this line is burned forever in my memory) Spock taking her in his arms and “raining kisses on every square inch above her shoulder.” (!!!!)

Well, Dorothy, god bless her, pitched a fit and refused to back down. Pointing out that the fans “know exactly how a Vulcan makes love,” she insisted that Spock and the Romulan commander be seen fondling each other’s hands rather than raining human kisses on faces and necks. Leonard found out about it and balked at playing the scene, and wrote his objections in a now-famous letter to the production heads. Dorothy and Leonard prevailed on this one, and if you go watch The Enterprise Incident you will see quite a racy (for Vulcans) scene play out between Spock and the Romulan commander – all expressed via the touching of hands. [1]

For an extensive (but not exhaustive) listing of D.C. Fontana's work, see mlle's A D.C. Fontana Primer.