You may be looking for the con that began as "Toronto Trek Celebration" and became Polaris. 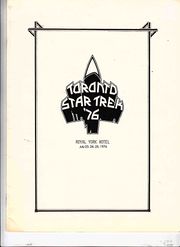 front of the con booklet 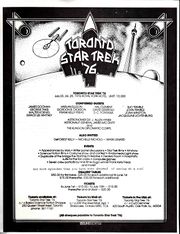 The con booklet was 24 pages and its layout was by Richard Pearse. It contains a 7-page art folio by Phil Foglio.

The People Behind the Con

Its Relationship with "The Draco Film Society"

The Draco Film Society was involved in this con:

For the first year or so they traded their clubzine with OSFiC, but stopped after 14 issues for undisclosed reasons ... probably financial. Shortly after birth, Draco graduated to being a full Science Fiction, Star Trek, Fantasy & Film club, and had a sizeable membership partly overlapping with OSFiC. The aristocracy of the club included the entire Pearse family, Elizabeth, Lauren, and Richard, Debra Laasko, Phil Stevens, who was an assistant model builder for The Starlost, Greg (Zilch) Hagglund, known as Bob Asprin's understudy, and later, Peter McGarvey.

OSFiC never had an official grudge against Draco, but in the increasingly polarized atmosphere of OSFiC, beginning early in 1975, the Derelict faction found Draco distasteful and didn't socialize with them. There is no doubt the distaste was mutual, and founded in varying degrees of fact or fancy among the members of the separate cliques.

Draco's first big project, not counting their participation in one of Henry's Chicons, was taking part in Toronto's first Star Trek convention. Optimism flowed freely, as glib words from a confidence man. In the end, however, my estimates of 1,000 were closer to the actual attendance of 1,500 than their hopes for 3,000. Part of the financial disaster suffered by Toronto Star Trek Con '76 was due to rampant ticket frauds, but simple calculations based on entrance fees and attendance show that of the total $27,000 lost, only $10,000 can be excused away by factors beyond the committee's control. The next year Draco tried again, with a con all of their own. While TST gave the congoer value for his money, Alpha Draconis cannot be said to have done even that. But, on the bright side, only $6,000 was lost this time. [1]

From the Art Folio by Phil Foglio

The Con was held on the 23rd-25th July at the Royal York Hotel, Toronto. Seven thousand attended, and many more were turned away after that number had been reached.

The guests were: George Takei, Walter Koenig, Grace Lee Whitney, Nichelle Nicholls, James Doohan, Harlan Ellison, D.C. Fontana and Spock's father (We are not sure if this meant Mark Lenard or Mr. Nimoy Sr.), plus "several Klingons and other aliens."

The films shown, included 2001 - A Space Odyssey, and there was a continuous showing of Star Trek episodes throughout the three days.

The stage from where the guests spoke was a scale replica of the Bridge, even down to the flashing consoles.

One high point of the Con was when Nichelle Nichols sang the Theme From Star Trek, and this was followed by two songs by Grace Lee Whitney, who is now a professional singer. [2]