Gordon Carleton is a fanzine illustrator. He published zines under the name T'Kuhtian Press and was one of the co-founders (along with Lori Chapek-Carleton whom he married in 1976) of MediaWest. 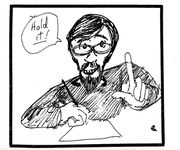 illo of Gordon Carleton, the artist is Phil Foglio

He has been a contributer to, among many others, Warped Space, Interphase, Menagerie, Pegasus, The Other Side of Paradise, The Star Trek Songbook and Beta Niobe Revisited.

Gordon created the "City on the Edge of Whatever" slideshow, the Landing Party Six concept, the "Star Trash" series ("The Man-Hatchery," "Journey to Babcon," and "Controllian Grid.")

From the 1977 songbook for Solar Sailors: "Gordon Carleton.... is a closet T'Kuhtian married to a famous Trek-fanzine editor who is said to have carried him off in the dead of night. She keeps him locked up in an enchanted cave in Lansing, Michigan, where he draws splendid illustrations, night and day, for her fanzines. Gordon is the only fanzine artist known to have gone to Baskin-Robbins in a Wookie [sic] suit. Rumor has it the fur was his own."

Gordon Carleton and Lori Chapek-Carleton (see her page) were the "Featured Fen" in Menagerie #11.

I saw a few episodes of Star Trek when the show was still first run. My memory of it is vague--what I recall is a lot of "nebulous clouds" so I probably caught "Obsession" or "Metamorphosis" first run and in repeats. I'm sure I saw a few other episodes too but at that time certain parental influences limited my Trek viewing ("You don't want to see that--CLICK!")

Anyway, I was hooked. Hard as it was at the time, I gathered information. Whitfield's The Making of Star Trek was out of print (I found someone who had a coverless, dog-eared copy). I bought a few of the Blish books and discovered those inaccuracies, I taped fragments of episodes and filmed them in black 5 white TV in Super8 (I had permission to use the school's videotape recorder, but the school was out of videotape! I couldn't afford to buy it myself). I stayed up all night before the day of my high school senior humanities presentation splicing the films and trying to cooI got so sick in fact that, had I not recorded the narration, I never could have made it through. I had constructed my first model of the USS Enterprise as accurately as I could at the time (the only color picture I had was the one on the AMT box and you know how accurate that is!). The model broke on the way to class. The room could not be made dark enough to see the film. The tape was at least audible. I still have the research paper. It's awful. But it got a 4.0 in my English class, where I also turned it in, senior year.

Even all that didn't deter me in my new quest. I went to STAR*Con 1 in Detroit. I went to STAR*Con 2 in Detroit. I discovered conventions were good for meeting members of the opposite sex. I also covered it for the State News [the Michigan State University student newspaper]. I have an interesting collection of photos from that one -- I keep meeting people in those photos I didn't know when I took them.

In Fall of '74 three young ladies showed up on the State News display advertising office where I hung out) to take out an ad for a new Star Trek club. I went to the second meeting. I observed. By the third meeting, Lori Chapek (one of the young ladies I had first seen in my office and had observed and judged competent at the second meeting) had announced the formation of a fanzine. Jane Clinkenbeard offered some artwork and a cover with a title -- WARPED SPACE. I presented three graphics I had kicking around.

Gene Roddenberry appeared on campus. Leonard Nimoy appeared on campus. I discovered such events as club meetings and lectures were good for meeting members of the opposite sex. I discovered meeting members of the opposite sex wasn't all that great for me. I went to a New York Convention. I saw Gene and Majel drunk. I met a friendly gopher and listened to some well known sf writers sound pretty drunk and stupid. I discovered meeting Michael McMasters was not great for getting to know friendly gophers better.

I went to more conventions. I drew more pictures. We did more issues of WARPED SPACE. We put on Ourcon. Ourcon means different things to different people. To some people it means "debt." To me it's the point where I really started caring for Lori Chapek. A few conventions later we were married. Naturally it was a Trekkish wedding. Everyone in the wedding party wore an IDIC. You get the idea.

We still do WARPED SPACE. I still do Trek art for whoever. We still watch Trek. I suppose, in a way, we are Trek. After all, isn't that what fandom's about?

A Tiny Sample of Carleton's Art