City on the Edge of Whatever Coloring Book

The slide show, and this subsequent coloring book's topic is very much an RPF with the characters of Spock, Kirk and others from the Enterprise interacting with Gene Roddenberry, Harlan Ellison, and fans at a Star Trek con.

It is a satire of the episode "City on the Edge of Forever," only in this version, it is Harlan Ellison (not Dr. McCoy) who stumbles into the Guardian of Forever and appears at the Star Trek con, Chicago Strekacular

One of the main commentary of this fanwork is Ellison's loud rage that his original script for the episode "City on the Edge of Forever" was altered for the screen, including the elimination of the topic of drug addiction on the Enterprise.

Another main commentary is by Gordon Carleton: he rails against big procons and their greedy ways, the avarice of big-headed celebrities, and the dull fans who will buy anything Trek-related. 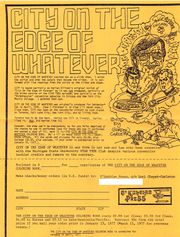 From an ad in The Halkan Council #24:

It is the handier form of the slide show scripted and drawn by Gordon Carleton (handier in that you get to see it without having to try to catch it at a con.)

inside page, the "voices"
From the flyer:

City on the Edge of Whatever started out as a slide show. I wrote the script and drew the panels that became the slides. It is performed with live readings from the script as the slides were shown. City is based partially on Harlan Ellison's original script of 'City on the Edge of Forever' as it was not produced, partially on the aired version of the Star Trek episode, and partially on the Strektacular convention debacles in Chicago and New York City. Mostly Chicago. I gofered that con. City on the Edge of Whatever was originally produced for SeKWester*Con in April, 1976. (How I finished it in time I'll never know.) Since then, City has been on the convention circuit to such places as Toronto, Salt Lake City, New York City, and my living room. Toronto had to be the best. Harlan saw City in Toronto. Harlan liked it. Boy, did Harlan like it!

However, the show can't be everywhere, so you folks deprived of the chance to see it performed (and for those who saw it performed and wanted a copy of), here it is -- The City on the Edge of Forever Coloring Book. 8 1/2 X 11 on heavy stock, (70 lb.) paper, photo offset. All the words and pictures for only 3.00, plus postage...

City on the Edge of Whatever in any form is not now nor has ever been connected with the Michigan State University Star Trek Club despite various convention booklet credits and rumors to the contrary.

Based on Gordon Carletons' slide show of the same name, created when Paula Smith and Sharon Ferraro requested a slide show version of a STAR TREK episode satire for their SeKWester*Con. What better episode to parody than Harlan Ellison's award-winning "The City on the Edge of Forever"? The slide show/coloring book pokes fun at both Harlan's original script and at the aired version we saw, and the events at a certain Chicago STAR TREK convention one infamous summer

(well before the advent of Creation Cons!). CITY has been on the road internationally, from New York City to Salt Lake City and played in Toronto at an SF con back-to-back with the Hugo-nominated "The Capture" slide show by Phil Foglio and Robert Asprin. Harlan was there, and he loved it!

About: From the Zine's Introduction

It all started out easily enough, I suppose. Way back when WARPED SPACE started out, I volunteered to do a cartoon-style satire of a STAR TREK episode. Naturally, for my first attempt I picked the longest, most involved episode that was ever on the air: "The Menagerie". I started borrowing filmclips from whoever would lend them to me and managed to borrow a cassette tape recording as well (two tapes, actually). If I recall correctly, I had just seen the second part of "The Menagerie" on TV as well. I don't think I saw the first half then because I didn't remember the mat shot at the beginning (when they first beam down to the Starbase where Pike is when I was listening to the tape). I tend to remember the special effects type things.

Anyway, I outlined the actual episode as it was aired and wrote my storyline from that. Once I knew what was I needed, I tried to gather the specific filmclips and photos I needed to draw from. I worked down to the wire and finished the first half at some obscene hour of the morning the issue was going to press. That was WARPED SPACE 2, when the "Man-Hatchery" was born.

Part 2 went about the same way. I discovered that I had drawn the braid incorrectly on the uniforms in the flashback portion (in "The Cage" everyone had one stripe) and corrected it in Part 2. So much for consistency. I finished it with about as much time to spare, and dropped dead from exhaustion. All this during classes, of course.

Since the "Man-Hatchery" went over well, I considered doing another satire to be the next logical step. I figured that having tackled one of the best episodes, I should go for one of the worst episodes. "Spock's Brain" had never been one of my favorites, so I proposed "Schlock's Ears" ("Jim, Schlock's ears are gone!"). I actually got it written out, but I was never satisfied with it. I got the first page drawn, too, but I wasn't happy with that, either. With classes, work, a tragic love affair, and the usual dismal course of life, I never quite got back to it.

After OURCON I did a con report based loosely on "Journey to Babel". It received mixed reviews, partially because it was fairly accurate to the behind-the-scenes backbiting that was going on at the time — still is, for that matter.

In a way, OURCON led into the creation of Landing Party Six, a vehicle I created as a sort of writing workshop. Unfortunately, not that many people seemed interested in using the format and I ended up writing most of the LP6 stories. I worked mostly on those, as well as illoing other people's stories, for a time.

When Paula Smith and Sharon Ferraro were preparing to put on SeKWester*Con, they asked me if I'd do a slide show version of a STAR TREK satire. One of the ideas bandied about at the time was simply a re-do of the "Man-Hatchery". However, I had not forgotten the down-to-the-wire deadline work I'd done on that originally, and I didn't like the idea of repeating a project. Coincidentally, I had been toying with the idea of doing an animated satire, but rejected the thought because of the time and expense involved. Before I had rejected it, though, I had worked out a bare plot outline in my head. Thus were the beginnings of "City On The Edge Of Whatever".

Creating "City" was a nerve-wracking experience. I started an outline, realized I was running out of time, started writing the script, realized I was running out of time again, did the drawings up to the point I had written, and started doinq panels beyond what, I had scripted! Doing colored panels is far more involved than black and white production. On good days I managed to turn out as many as three.

Having run out of script, I played it by ear ("If you pardon the expression ... ") and started doing panels while writing the plot in my head. When I finished the last drawing, I made photocopies and mailed the originals off to Sharon to be made into slides. I finished writing the script from the photo-copies the night before we left for SeKWester*Con. The copies of the script that were used in the original production were made the morning we departed for Kalamazoo.

"City On The Edge Of Whatever" has been on the road nationally, from New York to Salt Lake City. Internationally, in fact, since it really hit its peak in Toronto where we got to play the Grand Ballroom to a packed house that included the audience that came to see the Hugo-nominated slide show "The Capture" and the costume competition. Harlan Ellison was there, too. Ego-boo all the way.

Since the expense of printing slides in sets of 32 is a bit much, we needed to come up with a cheaper way of providing copies of "City" to those who requested one. The "City" Coloring Book seemed to be the answer.

One of the reasons the book was so long in production, besides a lack of spare time in general, is, again, a great dislike for repeating a project. Tracing 32 original drawings --what fun!

At least I'm clear for the next project now ...