The press's name is derived from the name "T'Kuht" given to the sister planet of Vulcan by Gordon after it first appeared in the Star Trek animated series episode "Yesteryear". 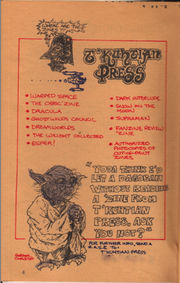 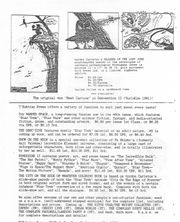 One of their more well known fanzines was Obsc'zine, an early adult themed fanzine published in 1977. While it featured mainly het fiction, it featured a nude Spock, with a strategically placed hand on the cover. Also in 1977, the press began offering to print out-of-print fanzines, provided that the editor or publisher authorized the duplication. [1]

In 1980, Lori won the FanQ Award for Best Editor. The press continued publishing its multi-fandom fanzine Warped Space until 1984.

TKuhtian Press is comprised of Lori Chapek-Carleton and Gordon Carleton. We produce fanzines, posters, and MediaWest*Con, and Gordon runs Gordon Carleton Studios, which produces stationery and note cards; he also accepts art coimissions and does photography. Gordon coined the word "TKuhtian" to refer to a native of "T'Kuht," which is what he called the sister planet of Vulcan that was visible in the animated STAR TREK episode "Yesteryear." T'Kuhtian Press is our ongoing fannish outlet to express our interest in STAR TREK, STAR WARS, and other multi-media/science fiction/fantasy publications. Of necessity, we do this in our spare time, while we try to earn a living in the mundane world. We've suffered a production slowdown since the early 1980's, but are gearing up again with the help and encouragement of many good, fannish friends.

Although we don't have formal submissions guidelines, we're looking for material (poetry, prose, art) to include in our various fanzines. It might be wise to ask which titles or issues are still open for submissions. Manuscripts should always be typed. Photocopies of unsolicited art are welcome; artists desiring upcoming assignments should indicate their interests, strengths and weaknesses, and how much lead time they require. Photocopies of art samples are encouraged; we will maintain files on interested artists so that we can match them up with the ideal prose or poetry submissions. If any submissions are to be returned, include a self-addressed stamped envelope.

We are sometimes in need of production help; if you are interested, let us know. And if you live within what you consider to be a reasonable driving distance to Lansing and would like to be informed of fannish doings, we'l contact you if something comes up.

Unless otherwise noted, al I'Kuhtian Press/Gordon Carleton Studios fanzines are photo-ofset, with reduced print. We try to produce the finest possible product at the lowest possible price, and try to get it out to you in the timeliest possible manner. All T'Kuhtian Press items previously out-of-print are being remastered and are now available as reprints; if we somehow managed to forget to include a title in this catalog, write, and let us know! We appreciate your support and hope you will find some items included that you will order. Pass this information on to other fannish friends. We suggest you photocopy the price sheet before submiting an order, so that you wil have a blank order form to use for your next order.

T'Kuhtian Press was founded by Lori Chapek-Carleton and Gordon Carleton in 1977, originally as a student organization at Michigan State University. We quickly became known in fandom as the publishers of fanzines such as Warped Space and The Weight Collected, and subsequently as the proud sponsors of MediaWest*Con.

Gordon was a major contributor to Startoons (Playboy Press 1979), has had cartoons published in various issues of Starlog magazine, and has written for Classic TV magazine. [2]

A 1986 Note on Zines This Publisher Could Copy and Distribute

Out-of-print 'zines we have permission to photocopy in part or entirely include: ARCHIVES, THE CAPTURE, FACETS, FALCON'S LAIR, FANTASIA, THE FANZINE REVIEW 'ZINE, FAR REALMS, GRUP, HYDROSPANNER ZERO ONE SHOT, INTERPHASE, THE KLINGON EMPIRE APPOINTMENT CALENDAR, MASIFORM D, MENAGERIE, THE OTHER SIDE OF PARADISE, PEGASUS, R & R, SAHAJ COLLECTED, SEHLAT'S ROAR, SHOWCASE, SOL PLUS, THE SOUTHERN STAR, and Others.

S.a.s.e. us for the forthcoming flyer. If an editor elsewhere tells you her 'zine is out-of-print, ask her if she's considered asking us to make it available in photocopy form, if she cannot provide the service herself. At one time we allowed past T'Kuhtian Press publications to go out-of-print, but have decided to

keep all T'Kuhtian Press titles in print permanently. Beware of dealers offering "out-of-print" copies of T'Kuhtian Press publications - you'll probably pay more from them! We do have authorized agents selling T'Kuhtian Press publications for us; among these are Devra Langsam, Roberta Rogow, Jim & Melody Rondeau, and Bill Hupe. Bill Hupe is also now working in concert with us to provide authorized copies of out-of-print 'zines. We are always looking for other people willing to agent our 'zines at conventions we can't attend: agents rake in 10% of all sales. Get in touch with Lori if you're interested in agenting at upcoming conventions; two weeks' warning is all we generally need in order to ship 'zines to agents in plenty of time for the next convention.

About the Dissolution of The Michigan State University Star Trek Club