From Boldly Writing: "Landing Party 6 stories were the adventures of an Enterprise team that were the role-play alter-egos of Warped Space writers & club members."[1] 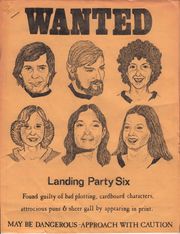 Illos of the six members of "Landing Party 6" as they were printed on the cover of Spectrum #32. The artist is Joni Wagner, mash-up by M.J. Fisher
In 2007, Gordon Carleton proposed more adventures. From the MediaWest*Con program book:

The Return of Landing Party 6? With the 40th anniversary of Star Trek, ST panels and exhibits at Worldcon, and the "remastered" SFX on TOS episodes, Gordon has been inspired to possibly put out Volume 3 of the Compleat Faulwell/LP6, maybe for MW*C 28. There were a couple things that got left out of Vol. 1&2 and some new stuff is in the works. Does anybody care? Any artists and writers want to contribute? Also looking for some references if anyone happens to have them: Spectrum 32 ("Wanted" cover), and references to T'Kuht and T'Kuhtians in fanfic or pro stuff.

Reactions and Reviews: Both Issues

I adore Paula Block's Sadie Faulwell series. Some may call her Mary Sue, but I beg to differ; she is a real person, and a fine match for Paula's very realistic McCoy. Paula's writing is always wonderfully evocative, whether the tale is tender, serious, slapstick, or all three. [2]

I recently borrowed "The Compleat Faulwell/Landlng Party 6" Vols 1&2, as I recalled enjoying LP6 stories in Warped Space ages ago. Either my memory has warped or some of the stories that so impressed me weren't included. Aside from one comedy story (Girc'N'a Pun Farr. the title of which escapes me), I found it boring and repetitive, and Faulwell an atypical, but undeniable and annoying, Mary Sue. [3]

Listed as no age statement required but I disagree!! Some of the humor is amusing but there is a lot of sex (male/female) and some of the stories are definitely not for kids. One in particular, is about an alien species that f***ks everyone in sight as a matter of course, involves incest, though alien, and included a picture of one alien licking a pair of female [breasts]. I wouldn't pass this zine along to my 16 year old sister, let alone kids and really think it should be marked 'age statement needed.' [4] 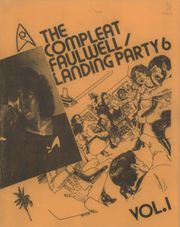 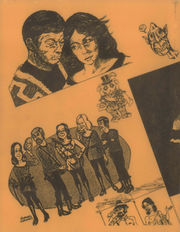 back cover of issue #1, Gordon Carleton
From the editorial:

THE COMPLEAT FAULWELL/LANDING PARTY 6 brings a number of surprises. First of all, I'm not Lori. I took over editing, as her work schedule ceased to allow her any free time, and because of the fact that I created LP6 and had a hand in the Faulwellian Epic from time to time. Secondly, this is Volume One. It became obvious that there were simply too many stories altogether to put in a single binding. And it's impossible to separate Faulwell from LP6. Volume Two does include the rest of the Faulwell and LP6 stories written to date, including a couple never before published, as well as many new illustrations. In compiling this collection, I was almost afraid to go back and read some of the earlier works, fearing that they might require extensive rewriting, but I was pleasantly surprised to discover that they hold up remarkably well, even after nearly ten years. In fact, the series involving the Poblocki Bears, Minkees, and Nudorians is still amongst the funniest things I've read. For the uninitiated, Sadie Faulwell and LP6 began in the early issues of WARPED SPACE in 1975. In the beginning there was Faulwell, and Faulwell was good. Inspired by her, the original STAR TREK TV series, Filmation's animated STAR TREK in its original run, and a desire to satirize the KRAITH WRITER'S GUIDE, I invented Landing Party 6. The series continued, and now includes STAR TREK: THE MOTION PICTURE and the aftermath of STAR TREK II: THE WRATH OF KHAN (STAR TREK III: THE SEARCH FOR SPOCK has not been released at this writing). Welcome to the world of the non-bridge crew of the U.S.S. Enterprise. For those of you familiar with the adventures of Faulwell and LP6, welcome back. Six to beam up ... -- Gordon Carleton

I am not Paula Block.

I mention this because it was Paula Block's contribution to the WARPED SPACE "Landing Party 6" stories and the start of her own Sadie Faulwell series that caused some public confusion over our respective identities. At the same time it was Po's Sadie series that introduced me to her writing, and I've been impressed, not to mention often awed by her talent, ever since. If a Mary Sue is an author's wishful fulfillment character, then Sadie Faulwell is one. But in the best, most forgiving sense: Sadie fulfills her author's reasonable and realistic wishes. Her presence in the stories you are about to read (or reread) never mangles the characterization of the Enterprise regulars. Her successes are not due to changes in the universe's normal rules that amount to magic. She learns from her failures. Kirk doesn't fall in love with her. McCoy does, but only after a reasonable length of time and a rational series of events. The happy endings come about realistically. Not that Sadie is a wholly reasonable and rational person. Like her creator, Paula Block, she operates best on the margins of reasonability, at the edge of rationality, near the cracks where oddity and the just plain weird peek out, but most of all, where human feelings are the purest. There's not usually a great deal of action in these stories, not much conflict, especially if that's taken to mean photon torpedoes at ten parsecs. What there is is emotional action, deep and involved clashes and unions between people's souls. The characters interact less hand to hand than heart to heart. And this is what I personally like best about, and occasionally envy in, Po's writing. She gives us, apparently so easily and naturally, the sense of her characters' hearts and souls, so that me must cry as Kirk reaches for a friend thought to be dead, or bust up laughing when Sadie makes a quip about legless Vulcan dwarves, or feel serenity as David Keith melds with a tree. She does it without sob and mush; her people don't talk about what they feel - they feel what they feel. I know of no other writer who can depict emotions of such wide range so well. And I'd like to know how the hell she does it.

I'm still not Paula block. But sometimes, I'd like to be.

Vol.2 concludes the previously-published adventures of Lt. Sade Faulwell and/or Landing Party 6, as well as premiering two new stories which update the series through STAR TREK: THE MOTION PICTURE and STAR TREK II: THE WRATH OF KHAN. Due to the time warp of publishing schedules, Paula Block's "The Book of Changes" has become an alternate STAR TREK: III THE SEARCH FOR SPOCK, as it falls into the same chronology, while being written before the third film's release. Interestingly, it parallels ST III in many ways, yet leads to its own conclusions. I shall leave it to you, the reader, to decide which is the better story. 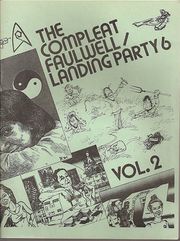 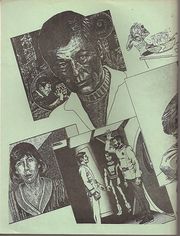