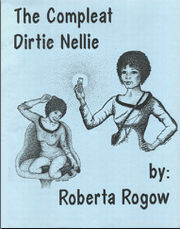 The Compleat Dirtie Nellie is a het 129-page anthology of fiction by Roberta Rogow. It has two sections. The first collects all of Roberta Rogow's Dirtie Nellie stories into a single volume. The second makes up Oriana and includes the adventures of Nellie's friends, T'Rass the Vulcan, and Yarrah Bethan, and the Andorian.

Art for Dirty Nellie is by Gordon Carleton, Joni Wagner, Leah Rosenthal, Nan Lewis, and Jeanne McClure. Art for Oriana is by Leslie Fish. Lori Chapek-Carleton was the original editor.

After it was initially printed, it was discovered three stories were missing. They were hastily printed for insertion by the zine buyers, stapled together with a little note:

Our apologies to Roberta Rogow and our readers for the attached three stories that belonged in "The Compleat Dirty Nellie" and were not brought to our attention until after the first printing. We have punched the pages for inclusion in your volume in the following manner: Number-only pages replace the previous version; Number-letter pages are appended to the pages of the same number.

THE COMPLEAT DIRTY NELLIE gathers all of Roberta Rogow's Dirty Nellie stories under one cover and includes the adventures of her friends T'Rass the Vulcan and Yarrah Bethan the Andorian (the related Oriana series) as well. These stories originally appeared in WARPED SPACE, THE OBSC'ZINE, and elsewhere, and have been revised for this collection. Previously unpublished stories and newly commissioned art will also be included, as will both a time-line to the series, and a glossary. The stories take place before, during, and after Nellie's, T'Rass's, and Yarrah's adventures aboard the Enterprise as crew members; some are loosely intertwined with the Landing Party 6 series.

[This is a] sort-of-reply for some of the critics of the Dirty series. Dear people — I wrote most of these stories about two years ago. A lot can happen in two years, and my more recent stories show growth in style and plotting (take a look at "The Awakening" in PROBE 12 to see what I mean). Also — as I developed the story, I found myself getting into some pretty murky territory. There are at least seven stories in the Dirty Nellie/Oriana series left to run, and they take our heroines out into the Big Wide Galaxy, where they will run into a real problem that faces most people at one point or another in their lives: a philosophical parting of the ways with a person with whom they have been very close. It's happening to some people in Trek fandom right now, and it's shattering when it does happen. More than that I can't say — it would spoil the story.

Just remember — most of the stories were written for fun, not to make a point. The point creeps into the stories almost unnoticed.

The people who have been following the adventures of Dirty Nellie Gray in Warped Space and Grip may be a little puzzled by "The Immovable Object and the Irresistible Force." What happened was that there were four stories which were supposed to be printed over the last four months in Warped Space, WS ran into a legal hassle, and a printing hassle, and the result is they are somewhat behind schedule. However -- to bring you all up to date — here is a brief synopsis of the steps that lead Nellie to her position on New Lucerne: "You Can't Go Home Again," WS #39 or 40. Nellie goes into Spacetown to visit her mother on Argelius, and realizes that she is no longer a Spacer. She gets conked on the head by a youngster whom she meets again in "The Immovable Object..." "Journey's End?" Warped Space #41. The end of the Five-Year Mission, and a turning point in Nellie's life: will she accept the life of a ground-based wife, or go into security work, a complete departure from her father's plans for Conmand for her. "Experiment in Survival," WS #42. Nellie is stranded on a mysterious planet with a Klingon, Kaldon of Jodh. After many adventures, they decide to stay together. "The Investigation," WS #43, Nellie and Kaldon solve their first case, which involves her old school chum Lady Bethan Tydryn of Andorria. Nellie inherits the house on New Lucerne — and that's where "The Inmovable Object and the Irresistible Force" comes in. There are more Dirth Nellie stories in the sequence, and the lot of them will be collected into a "Compleat Dirty Nellie" by Lori Chapek-Carleton one of these days.[1]

Some day I will tell you all about "Dirty Nellie" who started out as a minor character in a standard 'whodunnit' on board the Enterprise, and wound up as a character in her own series over five years, in three fanzines! [2] 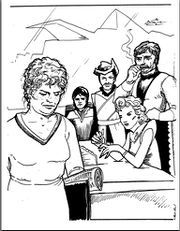 From the editorial (1991) of "The Compleat Dirtie Nellie":

In the beginning, Dirty Nellie was a red herring. Myi first Star Trek story was a soppy romance between James T. Kirk and a young doctor. That one went where all such stories should go ... the trash-basket. My second Star Trek story was "The Aldebaran Jewels Affair", and I needed someone on board the Enterprise who looked l like a thief, but wasn't. Enter Dirty Nellie, Spacer slang and all. The story appeared in Starfleet Annuals/Avatar in 1975, and it was my first fan fiction to be published. Little did they know what was to come! Over the next fifteen years I turned out a string of stories that took Dirty Nellie from the Starfleet Academy to the position of Captain Kirk's Yeoman to a career as a private eye on a neutral planet named "New Lucerne". I used Dirty Nellie to spoof other fan writers; "The Affirmation of Nellie Gray" is a comment on the "Kraith" stories of Jacqueline Lichtenberg, and "The Reformation of Nellie Gray" gets her involved with the "Landing Party Six" gang of Gordon Carleton, Paula Block, Lori Chapek-Carleton et. al. I introduced several factors into the stories that were important at the time, like female bonding (a lot was being discussed about male/female relationships, and why men had to undergo certain rites of passage). Eventually, Nellie grew up, sort of, and I wanted to kill her off, but Lori insisted I give her at least a fighting chance. So the last we see of Nellie is as a plump but feisty gal, entering middle age and fighting it every step of the way. How much of Roberta Rogow is there in Nellie Gray? Like all writers, there is some of me in every character I create... but I admit that Nellie is the person I wish I had the nerve to be! Nellie has more nerve than an aching tooth, more stones than the Rocky Mountains, and the gall of an oak tree. She fears nothing, not even the wrath of Starfleet Central. She can talk her way out of almost anything, and talk her friends into almost anything. She winds up with a Klingon lover, and when he leaves her, she's able to pick up another lover half her age. Is Dirty Nellie a "Mary Sue"? In a way she is... but she's not perfect, and she can be a large pain in the butt to authority figures. Writing these stories gave me a chance to work out a few of my own hang-ups about authority, responsibility, and the advances of age. They also gave me a chance to improve my writing skills, which is one of the major functions of fan fiction. Most importantly, through the Letters of Comments the stories generated, I got to know people like Leslie Fish and Jacqueline Lichtenberg, which has led to bigger and better things... Will I ever write another Dirty Nellie story? I don't know. Right now I'm busy with other projects, but may do something about her offspring... in a New Generation. The most important thing the Dirty Nellie stories did was to enable me to have some fun, and I hope you have fun reading them...