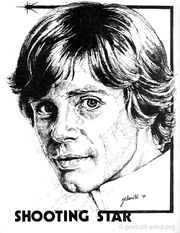 Luke Skywalker is a major character, and one of the main protagonists, in the original Star Wars trilogy and tie-in novels. In the films, he is played by actor Mark Hamill.

Luke is forced to leave home, and finds himself apprenticed to the Jedi master Obi-Wan Kenobi. He soon becomes an important figure, along with his twin sister Leia Organa, in the Rebel Alliance, leading the struggle against the Galactic Empire.

Luke Skywalker may be the hero of the saga, but he has always taken second place for the majority of fan writers to Han Solo. But he is not without his adherents. As a character, he has changed significantly. The pure, innocent boy turned in to an anguished, tormented young man, and then in to a dedicated Jedi knight with a Dark heritage. His movement from pure white to shades of grey has definitely increased his attractiveness to writers. Besides, as Jeanine Hennig puts it, "He looks so good in black." [1]

More canon facts are at Wookieepedia.

The Luke and Han War

While fans often have a favorite character or pairing, Star Wars is a fandom that included fans who took it to an extreme, and often an acrimonious one. See Character Bashing.

The letterzines Southern Enclave and Jundland Wastes are full of letters lauding Luke Skywalker over Han Solo or the other way around. This, in turn, increased the heat to support the favorite characters. Letters became very angry and inflamed, often with people saying they would refuse to have further communication with other people over this matter. The editor and some readers would frequently step in and ask folks to calm down.

What was the Great Church of Ford/Cathedral of Luke controversy? Why/how did it start? -- It came out after a fierce debate arose in SW fandom between a group of fans, who were rabidly devoted to Harrison Ford and thought Han was the real hero of the trilogy and that Luke had fallen to the Dark, and another group of fans who were just as passionately putting forth Luke Skywalker's cause. It descended rapidly into full-scale war and turned very ugly. SW fandom is still suffering the repercussions of it. Let's leave it dead and buried - where it belongs!") [2]

...the discussion quickly began to sound like a religious war of a certain kind, one which assumes that if you are not OF the godly, you must be AGAINST the godly. In private conversations, some fans began to talk about the "Church of Ford." I know that when I first heard the term, I thought it appropriate. It's known followers were absolute in their beliefs and swift and fierce in their attacks on those who did not accept the faith or who questioned the dogma. Unfortunately, the appellation only inspired the Ford faithful to claim that their efforts were necessary to defend Han’s reputation against the “Cathedral of Luke.” [3]

Return of the Jedi had debuted just a few months earlier and there was a hot and heavy debate raging in fandom primarily between two groups of fans, one of which was made up of ardent Harrison Ford/Han Solo supporters and the other of which felt just as strongly about Mark Hamill/Luke Skywalker. It became known as the Church of Ford/Cathedral of Luke War... The whole incident came about because, between TESB and ROTJ, a lot of fans had decided exactly how the story should end, who 'The Other' was, whether the Empire would fall or not, etc. When ROTJ didn't follow their plotlines exactly, they reacted by protesting loudly and vociferously. [4]

For more, see The Luke and Han War.

Luke/Leia was common after the first film's release, but dropped precipitously after he and Leia were revealed to be twins in Return of the Jedi. Many early fanworks featured OFCs as love interests for Luke. Despite Lucasfilm's intense dislike of slash, Han/Luke (Skysolo) was a popular pairing with a small quantity of Vader/Luke prior to the release of The Empire Strikes Back. Less common pairings for Luke are with Wedge Antilles, Lando Calrissian, and childhood friends Biggs Darklighter and Camie Marstrap.

The old Expanded Universe (now Legends) series of tie-in novels introduced new characters as love interests for Luke, including Mara Jade, Teneniel Djo, and Callista Masana. Luke/Mara was the only pairing with a large fanbase, and eventually became canon.

Following the release of Star Wars: The Force Awakens, Luke/Rey and Luke/Poe fanworks appeared, though in much smaller quantities than other pairings.

Luke Skywalker quickly became an icon for LGTBQ fans, who were able to headcanon that Luke was gay, due to his lack of canon love interests in any of the films. This was encouraged by Mark Hamill, who said in an interview, "If you think Luke is gay, of course he is. You should not be ashamed of it. Judge Luke by his character, not by who he loves."[5] Similarly, many fans view Luke as asexual and/or aromantic, with lots of puns about his status as an "ace pilot".

i have reasons for interpreting luke as specifically bi and specifically ace, and also, i will defend mara jade’s existence until my dying breath. but i’m thinking a lot about how there’s something magical in luke’s lack of a film-canon love interest… how it gives the freedom (a) to gay fans, to see luke in whatever way is most meaningful to us, and (b) to mark, to like and validate every single headcanon on twitter[6]

(8) After Luke discovers he and Leia are twins, he doesn’t respond with horror, dismay or even disappointment. His reaction is essentially “so that’s what that was!” and he’s pleased. That’s right. Apparently, his feelings have been platonic all along and he just can’t tell the difference.[7]

When asked by a fan whether he thought Luke had died a virgin, Mark Hamill said on Twitter, "Make up your own backstory. It's undetermined, but in the one I made for him myself, the answer is: no."[8].