Luke/Leia is the pairing of Luke Skywalker and Leia Organa from the Star Wars films.

It became twincest in 1983 after the movie The Return of the Jedi revealed that Luke and Leia were brother and sister.

A Bit of Canon

The pro novel Splinter of the Mind's Eye was published in February 1978. Many fans consider the book poorly written and full of plot holes and terrible characterizations. Official Star Wars canon spokespersons have since downgraded the book to "secondary canon" due to its content and state of being jossed by numerous things, including a romantic relationship between Luke/Leia.

Even before the revelation that Leia and Luke were related, there were few fanworks with this pairing. The main pairing for Leia was Han Solo, and Luke was paired (if he was paired at all) with original characters. This lack of a love life for Luke Skywalker in the early days was just one of the many driving factors of The Church of Ford.

"Yeah, there's very little L/L fic out there. I dunno if people are grossed out, censoring themselves (which I clearly never do), or are just not into it. I hardly ever find any."
ruckuskitten[1] 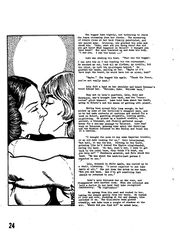 from "I Will Wait for You" by Pat Gonzales, the artist is Larry Blake, from Pegasus (1979)
Kinmeet by Susan MatthewsDate: 1979
In this story, Luke and Leia are coupled up, Han and Luke become adopted brothers.

The Shadows Suit Me [1] by Luke1/ruckuskittenDate: 2004–2005
Events take unfortunate turns, and we are left with a Luke with no light left in him living in the underworld of Coruscant. But love, and the past, won't leave him be...
And You Belong to Me [2] by jedinemoDate: 2008
Leia finds that sometimes life changes faster than her feelings.
The Meeting with the Goddess [3] by azephirinDate: 2010
She...is the life of everything that lives. She is also the death of everything that dies.

for now we are young (let us lay in the sun) [4] by outruntheavalancheDate: January 20, 2016
After they are reunited post-The Force Awakens, Luke and Leia have comfort sex. It's Luke's first time.
bring your heart back (to my island) [5] by RoaneDate: March 18, 2016Genre: Unrequited love
No matter how long he stays away, there's one attachment Luke can't rid himself of.