Kinmeet is a Luke/Leia Star Wars story by Susan Matthews. 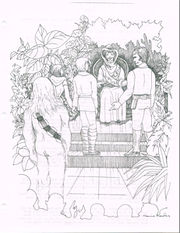 illo from the print zine

It was published in the print zine Galactic Flight #2 where it had illos by Carrie Bowles.

The story contains a very wink-wink-nudge-nudge scene that isn't slashy. Nope: "Luke made his decision -- it was practically a crime to disturb a man who was sleeping so angelically... Luke sighed deeply, took a firm double handful of Han's bedclothes and pulled hard, uncovering the Captain of the Millennium Falcon all at once; discovering too late that Anna was at the door to rouse them, and that Han slept in the nude."

The editors of the zine wrote: "Now I have to warn you that this story does not fit into our version of the GH Universe, but we felt it was so good that it deserved to be published. Susan, who is one of the most prolific, as well as one of the best, fan writers, graces our zine for the first, but not for the last time."

In this story, Luke and Leia are coupled up, Han and Luke become adopted brothers, and Han says, "Someday the Princess may be my sister-in-law."

'Kinmeet' is a manifestation of [the] big brother theme, in which Ms. Matthews has crystallized all of those vague references found in other stories. In this piece, Luke does indeed become Han's little brother through an elaborately-explained Corellian ceremony, and she lets us hear Luke's thoughts as he vows to cure Han of this big brother act someday. But the implication is that Luke doesn't really want to cure Han; he feels warm and comfortable knowing how Han feels about him. [1]

Of family, apparently the oldest in this category, Birgit Fischer is unique in that she is planetbound (at the time of the story, anyway) . According to Susan Matthews' "Kinmeet" in GF #2, Oorellian society is divided by large occupational categories into "Families," and Birgit is Arbiter (ie head) of the Fischer Family, of which the Solos are one House (Han is the last Solo, since his mother's death years ago). Tante Birgit is a minor character in this story, but her position as undisputed head and the glimpses of her personality qualify her for inclusion here — she certainly seems worthy of a story of her own! [2]